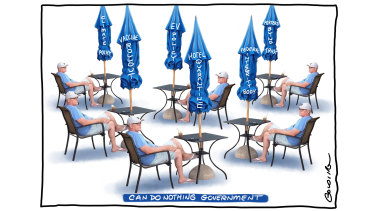 To submit a letter to The Age, email [email protected] Please include your home address and telephone number.

This would get my vote

Until now, I have agreed with tough police action against anti-vaccination protesters. I am old and frail and therefore at considerable health risk should I contract COVID-19 from any of them.

What changed my mind is a report by productivity commissioner Stephen King, who says there are cheaper and more effective alternatives to prisons, especially for low-level offenders, such as home detention, diversion, community service, drug, alcohol and mental health programs and restorative justice programs, where offenders and victims of crime come together (“Cuff love”, Insight, 13/11).

We have more police than ever before, better equipped and supported by a criminal justice system that is sprouting town-sized jail complexes around Victoria’s population centres at an alarming pace. Incarceration rates are climbing, yet politicians would have us believe crime rates are soaring. Maybe police are targeting low-hanging fruit, leaving tougher criminals to their own nefarious devices.

Whatever the reason, whatever it is they are doing now seems not to be working. Maybe prevention is better than cure. My vote will go to politicians who are prepared to take the political risk of giving prevention strategies a go.
Bill Wright, St Kilda West

A refreshing read
How refreshing to read Stuart Rollo’s article “Lest we forget, China hawks” (Comment, 11/11). His balanced, nuanced historical perspective notes our developing sense that “war with China is on the horizon” is “eerily similar to that of Europe in the years leading up to 1914”.

I, too, am disturbed by the “loose talk of war” with Defence Minister Peter Dutton and even Prime Minister Scott Morrison stoking the war-mongering fires when speaking of a “China threat”.

Rollo wisely advises that, among all the noise, we listen primarily to the voice of soldiers to remind us that “war means suffering and loss, and a healthy society should do everything in its power to avoid it”.
Kevin Burke, Sandringham

Wishful thinking
David Crowe is rightly unconvinced with Scott Morrison’s latest “can-do-capitalism” slogan, which assumes that the mythical free market will save us (“Cry freedom: PM punts we want it”, Comment, 12/11).

The PM’s ideological belief that capitalism will lead the way in fixing climate change is up there with the other myths of trickle down and laissez-faire capitalist economics. It’s nothing more than wishful thinking.

Climate change requires proactive government leadership that is not missing in action and has a sense of selfless urgency that steers capitalism in the right direction for all.
Paul Miller, Box Hill South

A continuing failure
Ten years on since A Bloody Business was shown on the ABC and still the live export industry is failing our animals on a monumental basis (“On the kill floor: Secret video shows animals writhing in ‘extreme pain’”, The Sunday Age, 7/11).

The Exporter Supply Chain Assurance System (ESCAS) has not protected our animals from systemic atrocious treatment, and all while the live export industry purports to have changed. In reality, all the tweaks in the world have not and will not safeguard our animals.

Seek common ground
The unedifying display of our two top federal politicians calling each other liars (“Morrison, Albanese offer perspectives on lying”, The Age, 13/11) shows how timely is the pact between the world’s top powers, China and the United States, to take a different course, at least on the pressing issue of climate change.

On just this one vital issue, if nothing else, could Scott Morrison and Anthony Albanese please try to find some common ground? They must know what hazardous territory is climate policy for political leaders of both sides. For self-preservation, if no other reason, could they please call a truce on climate change?

I don’t suggest agreement on some lowest-common-denominator emissions reduction target. Rather I would just like to see an end to the use of climate as political football. Why, for example, not bring on constructive debate of Zali Steggall’s climate change bills?

Could they even perhaps consider agreeing on some no-lose campaign rules? For example, that each side would forgo all attempts to take political advantage of any move by the other, however “reckless”, to increase emissions reduction ambition.
John Gare, Kew East

When it’s gone, it’s gone
It was the 1940s. Busy bottle swallows flitted in and out of mud nests carefully crafted beneath the overhanging cliff to thwart predatory snakes. A pair of black ducks speared around the bend like jet fighters. Meanwhile, unseen insects repetitively traced ever widening, mesmerising circles on the still water’s surface. Overhead, the elephantine limbs of centuries-old Murray River redgums bore timeless witness to life passing beneath.

Suddenly, my bamboo rod bent and vibrated. There were flashes of silver as sunlight shone on the cod gyrating in clear water.

I understand why young people march in the streets. I grieve for their losses. I’ve joined them, but to what benefit?
Bill Hampel, Malvern

Was this cut?
Energy minister Angus Taylor was quoted as saying Australia was an “active and constructive participant in the negotiations to ensure a positive outcome for COP26” (“Australia joins nations trying to soften accord”, The Age, 12/11).

Somehow the last part of his sentence “and to ensure business as usual for the fossil fuel industry” must have inadvertently been omitted.
Leigh Ackland, Deepdene