Government spending on Covid could soar past its current estimate of £372billion, a top Treasury official warned today.

Tom Scholar told MPs that the current National Audit Office (NAO) estimate of public expenditure during the pandemic was ‘a good, reliable snapshot’ but he would expect it to change.

The Treasury permanent secretary – the department’s most senior civil servant-  warned that if the public required booster jabs on top of their current double-dose it would add to Government costs.

He also said that companies defaulting on Government-backed Covid emergency loans could also see the Treasury take a larger hit.

Appearing in front of the Public Accounts Committee (PAC) today, Mr Scholar was asked about the figure released by the NAO from its cost tracker last week.

The National Audit Office (NAO) said last week the cost had risen by more than £100 billion to £372billion since its last report in January this year.

He told the MPs: ‘The £372billion is a good, reliable snapshot, based on what we know now. But there are still quite a lot of things that we don’t know. 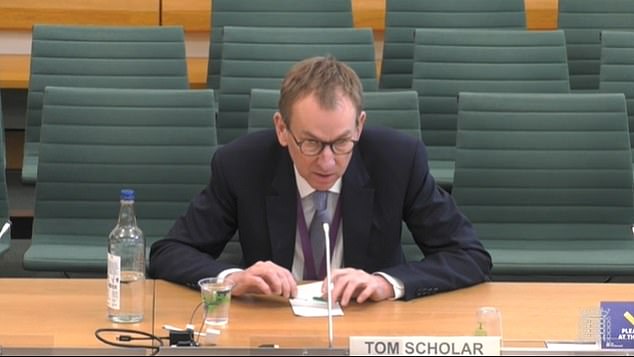 Tom Scholar told MPs that the current National Audit Office estimate of public expenditure during the pandemic was a ‘a good, reliable snapshot’ but he would expect it to change. 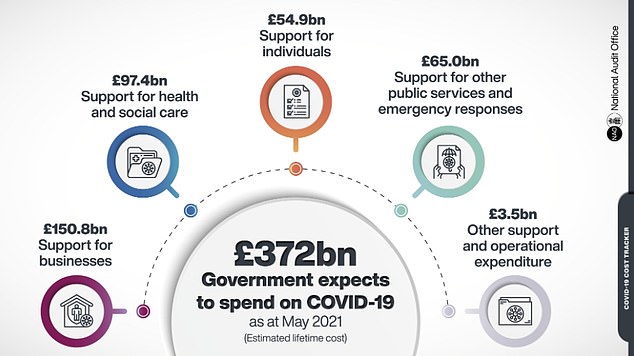 ‘All of that will depend on the number of tests that will need to be carried out – whether repeat programmes of vaccination turn out to be necessary, we just don’t know yet.

‘All of those things will have a big, big impact in the public expenditure figures.

‘The other thing that will have a big impact … is how the economy will evolve and the extent to which businesses are or are not able to pay back the loans that they have received.

‘As of today, inevitably there is quite a wide-range of uncertainty there, with every month that goes by on all of the things i have been talking about we will know more.’

It includes £26 billion worth of guaranteed loans which are expected to be written off.

Support for businesses such as the Coronavirus Job Retention Scheme and the Bounce Back Loan Scheme had the highest estimated cost, at £151 billion.

This was followed by help for the health and social care sector at £97 billion.

Programmes such as the Self Employment Support Scheme, under help for individuals, came to £55 billion.

And there was an additional £65 billion estimated to be spent on support for other public services and emergency responses.