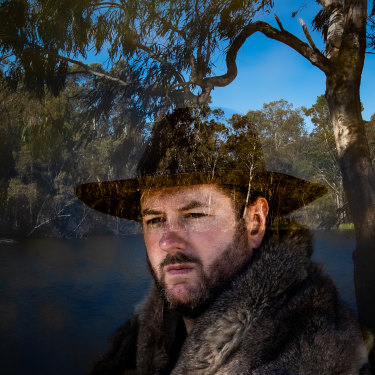 Marcus Stewart, co-chair of the First Peoples’ Assembly of Victoria, on country at the Warring river (Goulburn River). Marcus is a Nira illim bulluk man of the Taungurung nation.Credit:Justin McManus

Memories are always hard to describe. They can be part visual, part feeling, perhaps one particular sense – sound or smell, distorted out of proportion. My first memory of encountering white supremacy and racism in Australia is a disjointed one because my understanding of it came in two moments of time.

I remember my mum’s stiffness and the general sense of unease, though she did well to act cool, ushering me back inside. I stepped back into our house in Traralgon and was soon distracted by the TV, but not before I had caught glimpse of white sheets hanging on our front porch, catching the wind. “Is it Halloween?” I asked myself, confused.

I was only six or seven then. It was a few years later, probably when I was around 10 or 11, that I learnt about the significance of white sheets and burning crosses and other odious and ominous symbols of the Ku Klux Klan and how they are used to intimidate and silence people of colour all the way from the Mississippi to Traralgon.

Australian towns and suburbs don’t really leap into most people’s minds when they hear the words Ku Klux Klan, but ask any Aboriginal person if the KKK has a following here and I reckon I can guess the answer. Even if Nazi wackos such as those caught on camera last year up in Gariwerd/Grampians National Park practicing their Hitler salutes, goosestepping and butchering folk songs such as Waltzing Matilda, are limited to a handful of organised and extreme pockets, their imagery and threatening tactics are used much more than middle Australia would like to acknowledge.

So, why was my mum being targeted? One: she’s an Aboriginal woman. Two: she was speaking out and standing up for other Aboriginal people. Three: she dared to do both within the prison system.

Mum was an Aboriginal Welfare Officer working at Pentridge. She saw some shocking cases of abuse, violence and unbridled racism. I’m not going to go into them here. She’s always been a staunch woman. Not particularly confrontational, but staunch – tells it like it is and doesn’t suffer fools.

In those days “Aboriginal welfare officers” were tolerated and perhaps looked at as a curiosity by other prison workers, but if they tried to actually do anything that would, you know, improve someone’s welfare, well, forget it – they’d be laughed at. So, to speak up and “betray” your colleagues by reporting cases of clear and prolonged abuse was the worst sin you could commit in the eyes of prison staff. 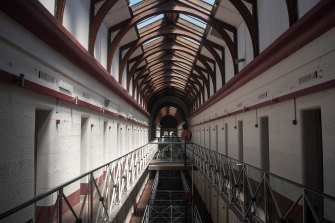 D Block in Pentridge prison, pictured in 2019 after it was closed as a prison.

She paid a price. Hounded, harassed, made to feel guilty for endangering her family.

I’m not sharing this memory because it represents a particularly big or defining moment in my life. On the contrary, it’s indicative of the low hum of racist background noise that most Aboriginal people teach themselves to tune out to.

This is just one story, one experience of one person at one point of time. But I’m reflecting on it because, with the establishment of the Yoorrook Justice Commission, Victoria is about to show the world how to conduct an incredibly important process of truth-telling and this is a warning that you’ll be hearing stories far more harrowing than mine.

As part of the Victorian Treaty process, the First Peoples’ Assembly has been holding extensive community engagement and consultation programs across Victoria to hear what mob want a Treaty to deliver. In our first few months, no matter where we went, one of the really clear and consistent messages we received was that there could be no Treaty without Truth. There is an overwhelming desire among the Aboriginal community to not only tell our stories, but to be heard.

So we set to work and successfully negotiated the establishment of what is essentially the first Aboriginal-led Royal Commission.

The Yoorrook Justice Commission will gather the evidence and build a public record of the devastating impact and legacy that invasion has had, and continues to have, on Aboriginal people in this state. And, importantly, it will chart a course for repairing that damage – a blueprint for fixing the structures that continue to dispossess and oppress our people. 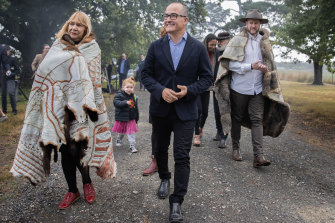 We need to pierce the collective and deliberate amnesia that white Australia wraps itself in. Not so we can wallow in our pain or inflict shame, but so we can reckon with the past, commit to unpicking today’s tangled impacts of colonisation, and spur ourselves on to do better, to be better.

That’s what will set this process apart from the countless inquiries and reports that have come before. Because this time, we’ll have a way to keep the politicians to their word. Yoorrook will help us find the path forward, but Treaty will provide the dotted line that they sign on to hold them and future governments to account.

Treaty is our opportunity to level the playing field. Instead of having unfair laws and policies imposed on us, the Traditional Owners of this land can be in the driver’s seat for a change – making the decisions to affect our lives and our communities.

I can’t pretend that the journey will be easy. Truths will be spoken that will be uncomfortable, we’ll have our disagreements, but I’m confident the journey will bring all of us closer together. A chance to listen, to learn and to build understanding and respect.

Sometimes you have to look back before you can move forward, but whether your family has called Victoria home for five years or 50,000 years, Treaty is about creating a fairer future together as equals.

Marcus Stewart is a proud Nira illim bulluk man of the Taungurung nation and is co-chair of the First Peoples’ Assembly of Victoria.