Paige Bueckers will be sidelined longer than initially expected after undergoing successful knee surgery on Monday, the Connecticut Huskies announced.

Bueckers had surgery on her left knee to repair an anterior tibial plateau fracture and lateral meniscus tear she suffered in the last minute of a Dec. 5 game against Notre Dame. She had the operation at UConn Health and rehab is estimated at eight weeks.

Eight weeks from Monday is Feb. 8, about three weeks before the end of the regular season. The reigning national player of the year will now miss the January rematch with No. 1 South Carolina that's circled on fans' calendars as well as a meeting with Tennessee on Feb. 6.

Bueckers was initially estimated to miss six to eight weeks while rehabbing the fracture. The meniscus tear was not previously announced. Her absence throws a large obstacle in UConn's high title hopes.

Through six games, Bueckers averaged 21.2 points, 5.5 rebounds, 6.2 assists and 2.7 steals per game. She was shooting 56.3% from the floor and provided most of the team's offense.

When will Bueckers return? 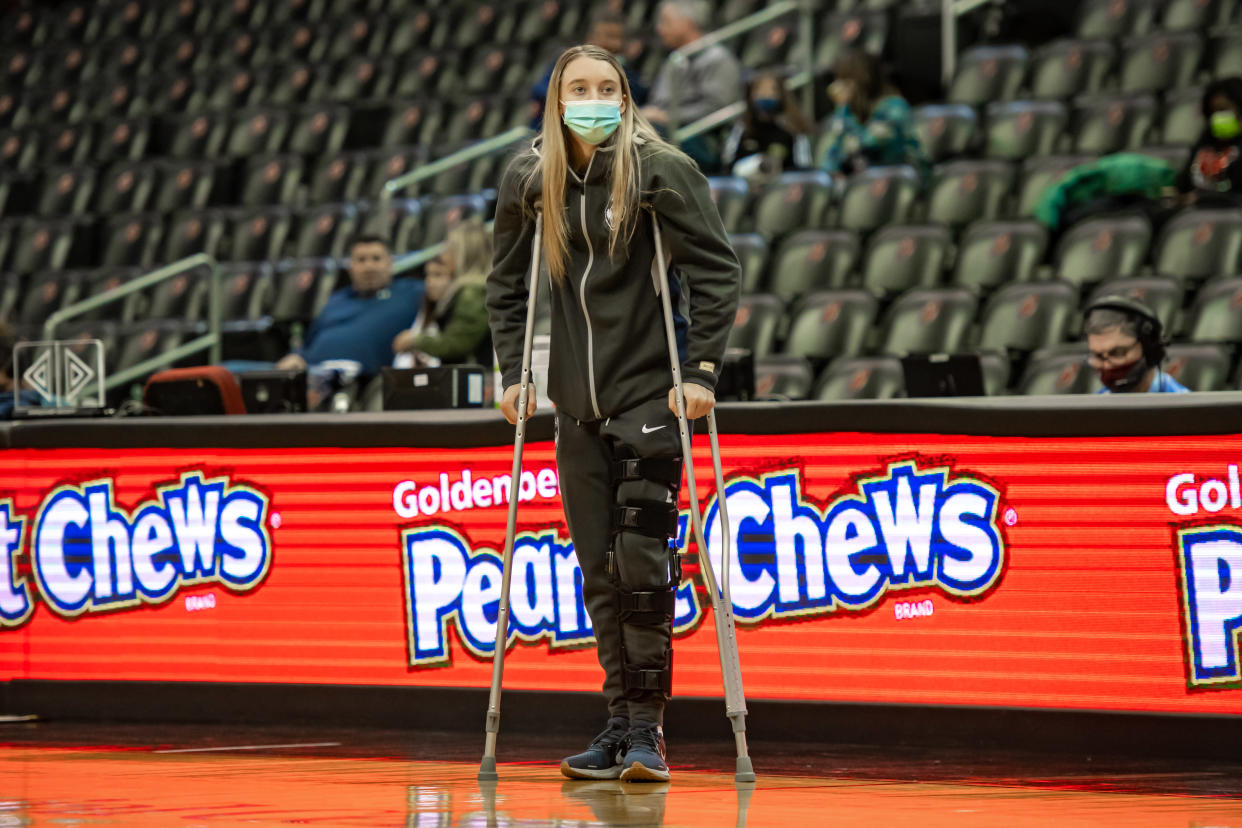 Bueckers will miss the rest of the Huskies' non-conference schedule, a set of games that's crucial for UConn's resume come tournament seeding time. Initially she was only expected to miss two and possibly the rematch with the Gamecocks.

The first game after the eight-week estimate is Feb. 9 against Villanova. The Huskies close their regular season with seven Big East games until the tournament starts on March 5.

Losing a national player of the year at any time is a huge blow, but it comes at a particularly rough moment for the seventh-ranked Huskies (6-2). They played with only three available guards against UCLA on Saturday after being upset by Georgia Tech earlier in the week.

Fellow No. 1 recruit Azzi Fudd was ruled out for at least two weeks on Dec. 1 with a stress fracture in her foot. Head coach Geno Auriemma told reporters over the weekend he's "not hopeful on anything before Christmas" for the guard's return.

Sophomore guard Nika Muhl is also out with a foot injury and Auriemma wasn't sure how long it might be, though he estimated around three weeks. Guard Saylor Poffenbarger entered the transfer portal as did forward Mir McLean. And forward Audrey Griffin is still sidelined with injury.

Still, the team avoided the program's first back-to-back losses since 1993 with a strong final quarter against UCLA. They collectively appeared to gain their confidence back after relying on Bueckers' talent in previous close contests.

Christyn Williams, their senior guard, found her shot and Evina Westbrook, a redshirt senior who transferred from Tennessee in 2019, has been clutch in the first and fourth quarters. Williams (14.3 ppg) and Westbrook (10.6 ppg) are the only double-digit scorers beyond Bueckers. Olivia Nelson-Ododa is averaging a team-best 7.8 rebounds per game alongside nine points per game.

UConn has a week between games to practice together with the pieces they have going forward, which should help heading into a big showdown with No. 6 Louisville.