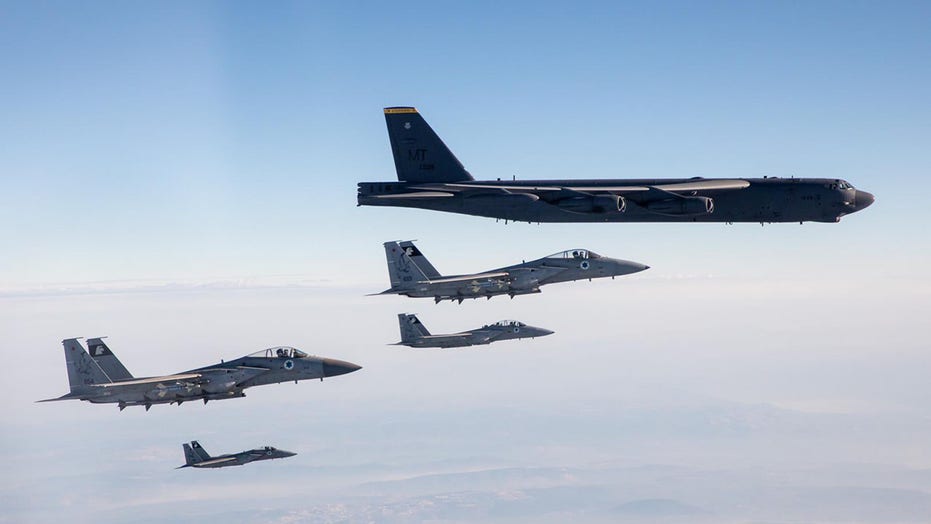 A pair of U.S. Air Force B-52 bombers flew a patrol mission over the Mideast on Sunday, U.S. Central Command said, as tensions remain high between Washington and Iran.

The military posted pictures of the crews taking off from Minot Air Force Base in North Dakota before the B-52H “Stratofortresses” flew across the Middle East. The military said the two heavy bombers were accompanied by military aircraft from nations including Israel, Saudi Arabia and Qatar.

While the military did not explicitly mention Iran in its statement, it said the mission was “to deter aggression and reassure partners and allies of the U.S. military’s commitment to security in the region.”

“This flight is part of the joint strategic cooperation with US forces, which is pivotal in maintaining the security of Israeli and Middle Eastern skies,” it said.

The flight came as pro-Iran channel Al-Mayadeen, based in Beirut, broadcast Iranian military drone footage of an Israeli ship hit by a mysterious explosion on Feb. 26 in the Gulf of Oman. While the channel sought to say Iran wasn’t involved, Israel has blamed Tehran for what it described as an attack on the vessel.

The U.S. Navy’s Bahrain-based 5th Fleet, which patrols the Mideast and often has tense encounters with Iran, declined to comment on the footage to The Associated Press.

The flight marked the U.S.’s fourth-such bomber deployment into the Mideast this year and the second under President Biden.

Such flights had become common in the last months of former President Donald Trump’s administration. Trump’s 2018 decision to unilaterally withdraw from Iran’s nuclear deal with world powers sparked a series of escalating incidents in the region.

Biden has expressed a desire to return to the deal if Iran honors the deal’s limits on its nuclear program. However, tensions remain high after militias in Iraq — likely backed by Iran — continue to target American interests.