The Victorian government is pushing ahead with plans for mandatory hotel quarantine when international flights resume, despite the head of the federal Health Department saying more vaccinations mean it might not be needed.

Infectious disease experts say they expect returning travellers will be subject to a form of quarantine until at least April next year, but they believe mandatory two-week hotel quarantine could be scrapped by October, when almost all vulnerable Australians are expected to have been inoculated. 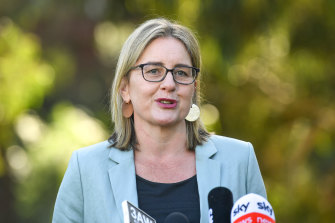 The Andrews government has refused to outline when international flights will resume after they were halted in mid-February following multiple leakages out of hotel quarantine.

The Age revealed on Saturday that the government was in negotiations to contract more hotels to its quarantine program, despite existing sites sitting almost empty and the program costing the state about $1 million a day.

On Monday afternoon, Transport Infrastructure Minister Jacinta Allan said the government was pushing ahead with its plans to build village-style accommodation units in regional Victoria and that mandatory 14-day hotel quarantine would remain on the cards for the foreseeable future.

“Future arrangements for hotel quarantine in Victoria [are] also being looked at, in terms of alternate facilities. The Premier has spoken on this on a number of occasions, there’s a review going on by the Department of Premier and Cabinet and that advice, in terms of what future arrangements we might put in place, is yet to be received,” Ms Allan said.

Federal Department of Health secretary Professor Brendan Murphy told Sky News on Sunday the Commonwealth would review its border and quarantine arrangements as more people across the world, including Australia, were vaccinated.

He said international travel could return next year, and indicated a return to normal life was on the horizon. But he urged people to remain patient.

“We will start to progressively look at what sort of border and quarantine measures we have to do,” he told Sky News.

“We might think about, for example, reducing the length of quarantine or more home quarantine, particularly for vaccinated people.”

Ms Allan said she had not seen Professor Murphy’s comments and did not emphatically rule out the suggestion, but added the Victorian government was relying on the advice of its public health team.

“Each state is putting in place its own hotel quarantine arrangements, in the absence of an overall national program, so each state will take the advice of their health officials, obviously, the circumstances that are unique to each its own state,” she said.

“Victoria’s go-it-alone approach to managing hotel quarantine hasn’t worked and it’s time the Andrews government started listening to the medical experts and following the success of the other states,” Mr Southwick said.

“Building a new facility won’t fix the systemic management problems of hotel quarantine and if the government thought they have fixed the program, then we would be bringing back stranded Victorians.”

Phase 1b of the vaccination rollout began on Monday, with 6 million vulnerable people to start getting jabs across the country.

Among those targeted in the phase are people aged over 70, Aboriginal and Torres Strait Islander adults over 55, and anyone with certain underlying health conditions.

Peter Collignon, an infectious disease expert at the Australian National University who received his first dose on Monday, said he believed mandatory hotel quarantine for all returning travellers could be abandoned by September or October, and replaced with a more bespoke model.

“This virus is going to be spreading around the world for four to five years – we don’t envisage we need to do [14-day hotel quarantine] for four or five years. I envisage we will have to do it until the end of the year and then see what happens,” Professor Collignon said.

“I agree with Brendan Murphy [about shorter stays and home isolation], but I don’t personally think it’s going to be feasible until October.”