As stories of COVID-19 rule-breaking on Victorian construction sites emerged this week, the state government was on the receiving end of some predictable criticism.

The theme was thus: one rule for struggling small business owners and another for Labor’s union mates on hefty pay deals.

Critics, including the state opposition, are right to say the sector has received special treatment during lockdowns and also correct to suggest Premier Daniel Andrews derived political benefit by keeping the industry running. 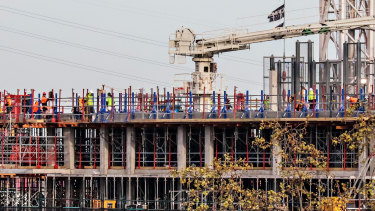 A West Melbourne construction site is one of many in Victoria underpinning the state’s economy.Credit: Michael Bachelard

Treasurer Tim Pallas made a rare appearance at a COVID-19 press conference on Monday to warn the building industry – the source of almost 15 per cent of Victoria’s active coronavirus cases – that after weeks of compliance warnings, the time for talk was over.

“This is a very serious state of affairs,” Mr Pallas said. “The permitted worker status of this industry could well be at risk.”

With the health of the state budget in mind, he’ll be dearly hoping his government doesn’t need to follow through with that threat. 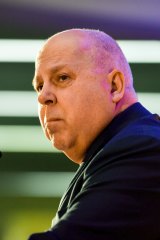 The construction sector, which employs more than 320,000 Victorians directly and many more indirectly, is Victoria’s fourth largest and its continued operation is the reason the state’s economy isn’t shrinking, according to analysis from the McKell Institute think tank.

The Andrews’ government’s spending on public works grew by 21.4 per cent in the June quarter and 62.3 per cent since the pandemic began. Over the same period, household spending dropped 3.7 per cent and private capital investment slumped 2.9 per cent. Commonwealth infrastructure spending dropped by 16 per cent during the pandemic.

The think tank estimates Victoria’s economy would have shrunk by 0.8 per cent since December 2019 if the level of infrastructure spending had remained at the level before the Andrews government was elected. Instead, it has continued to grow.

Notably, workers in the industries of comparable size – healthcare professional services, retail trade and education – are mostly still working from home or, in the case of healthcare workers or click-and-collect retail staff, at their workplace.

But despite the best technological advances, a house still can’t be built on Zoom.

Deloitte Access Economics’ Chris Richardson says the industry is “vital” to Victoria’s economy. He says governments are required to make trade-offs between the health risks of keeping an industry open and the economic harm caused by closing it.

“There’s no perfect answer,” he said. “The sector is stunningly important to Australia, and it’s even more important to Victoria than the Australian average.”

As the Treasurer noted, the average COVID-infected construction worker lives about 20 kilometres away from the outbreak site. This compares with an average spread of four kilometres for retail workers.

To travel those 20 kilometres, the hundreds of thousands of building hands, electricians and plasters are buying fuel and queueing at cafes, service stations and fast food drive-throughs. The small chunk of Melburnians who’ve seen the CBD in recent months would know labourers are the main thing keeping city outlets alive.

Labor MPs know how crucial these workers are to maintaining public acceptance for lockdowns. Talk to a party strategist and they will tell you how important suburban and regional tradespeople are to Andrews’ electoral fortunes.

In the “tradie belts” of Melbourne – down the Frankston line which runs through key marginal seats, and in the outer south-east, north-east and west of Melbourne – Victorian Labor secured big swings in 2018. In many of these areas, Scott Morrison’s federal Coalition polled strongly.

Many thousands of these workers are building one of the 75 government projects on the State Critical Infrastructure List that allows public works like the North East Link, West Gate Tunnel and school, hospital and public-housing builds to continue during lockdowns. An indefinite shutdown would add to delays and blowouts on these projects.

Ban construction and Mr Andrews loses support from workers and their families who have avoided shutdowns as the rest of the state has turned their kitchen bench into a home office.

The Premier’s motive is to keep these voters onside, not to please construction union bosses like John Setka from the CFMEU, who is famously no fan of the Premier.

Construction bosses need to ensure their sites are COVID-compliant to avoid a shutdown that Victoria, and the Andrews government, can’t afford.

Our supporters power our newsrooms and are critical for the sustainability of news coverage.

Becoming a subscriber also gets you exclusive behind-the-scenes content and invitations to special events. Click on the links to subscribe to The Age or The Sydney Morning Herald.