WASHINGTON (AP) — President Biden has launched into his second year in office with a new focus on making fatigued Americans believe they’re better off under his leadership as he embraces a pared-back agenda before the midterm elections.

The persistence of the coronavirus, rising inflation and congressional gridlock have exacted a bitter toll on Biden’s approval rating and threaten a midterm routing for his party, but the president sees no need for a major shift in direction.

Instead, Biden told Democratic National Committee members during a virtual grassroots event Thursday that Democrats broadly have to offer a clearer contrast with Republicans going forward. He said the contrast he hopes to paint is between Democrats' agenda and the lack thereof from the Republican Party, which he said was “completely controlled by one man, that’s focused on relitigating the past” — a veiled reference to former President Donald Trump and his continued false claims that he won the 2020 election.

“That’s the choice we have to present before voters: Between the plans we have to improve the lives of the American people, and no plan, none at all,” Biden said.

White House aides have also previewed subtler changes to how Biden devotes his time, with a greater emphasis on speaking directly to Americans and less time in the weeds with lawmakers crafting legislation.

“He wants to spend more time out in the country and less time behind closed doors negotiating,” White House press secretary Jen Psaki told reporters Thursday. She said Biden would rely on his aides more to engage in legislative negotiations, aiming to free up more of his own time to travel and sell his policies.

The understated White House response to a parade of bad headlines reflects the administration’s internal confidence that its predicament will lessen in coming months as the omicron variant of COVID-19 recedes and his policies have time to take effect. Administration officials believe they have until the summer to prop up Biden’s approval rating in order to help save as many Democratic congressional seats as possible.

“The public doesn’t want me to be the ‘president senator,’” Biden said in a rare news conference Wednesday. “They want me to be the president and let senators be senators.” Biden acknowledged “there's a lot of frustration and fatigue in this country” and placed responsibility for that squarely on the pandemic, “the new enemy.” 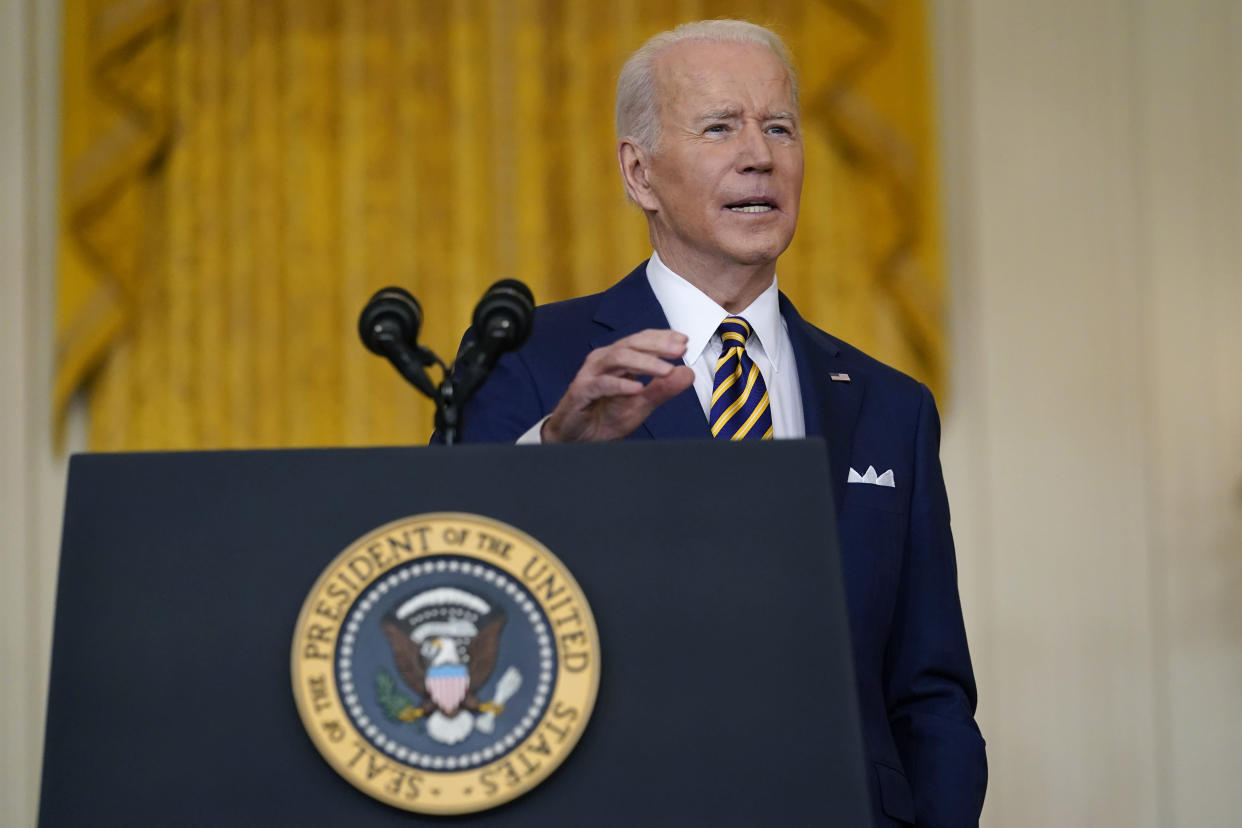 A video released Thursday by Biden’s inaugural committee to mark the end of his first year in office offered a preview of what’s to come. The ad highlights progress on the economy and against the virus, but acknowledges the work isn’t done.

“It isn’t all the way back, but it’s getting stronger,” narrator Tom Hanks says of the economy. “We may be entering year three of a pandemic none of us wanted or expected, but we’re moving.”

“I can feel the change,” Sandra Lindsay, the New York nurse who was the first person in the U.S. to get an approved COVID-19 vaccine, says in the video.

Getting Americans to recognize that change is a priority for the White House.

The pandemic and its aftermath altered how voters judge Biden’s performance. His $1.9 trillion coronavirus relief package launched the economy toward a fast recovery, but it also drove inflation to a 7% rate that frightened voters. The result is an unusual schism in which votersare financially comfortable yet deeply skeptical about the health of the national economy.

While 64% of Americans described their financial conditions as good, only 35% felt positive about the overall economy, according to a December poll from the AP-NORC Center for Public Affairs Research.

Biden spent part of Thursday meeting with his Infrastructure Implementation Task Force, charged with swiftly turning last year’s bipartisan infrastructure law into shovels in the ground and new jobs created. Billions of dollars have already been allocated, and Biden wants to ensure he gets the credit.

While the White House didn’t immediately announce travel plans for Biden, Vice President Kamala Harris is set to travel to California and Wisconsin this week to spotlight how money from the law is being put to use to combat wildfires and replace lead water pipes.

Biden insists he's not giving up on his nearly $2 trillion domestic priorities bill, but said Wednesday he hoped “chunks” would pass before the midterms. Slimming down the bill would probably be necessary to win over Democratic holdout Sen. Joe Manchin of West Virginia. But House Speaker Nancy Pelosi said Thursday she didn’t want the legislation to lose its ambitions to address climate change and lower costs for working class families.

“What the president calls ‘chunks’ I’d hope would be a major bill going forward,” she said.

Eric Schultz, a former spokesman for President Barack Obama, said the administration has so far gotten too bogged down in the minutiae of legislative negotiations. He suggested that it course-correct by sending Biden out of Washington to talk more about the specifics of how his agenda has helped average Americans.

“Joe Biden as is at his best when he’s talking directly to the American people about what they care about,” he said.

He also argued that Democrats need to be more forceful in drawing a contrast with Republicans.

“People need to understand that he has their back," Schultz said. “And the Republicans don’t. And so when he makes that case, it reinforces who in Washington is working for them,.”

Ben LaBolt, another former Obama spokesman, suggested that the legislative difficulties of Biden’s first year had a silver lining: “tempered expectations” for what’s possible, as well as a “sense of urgency” on the part of Democrats to get something done in Congress before the midterms, when they could lose control of either or both chambers.

“The accomplishments of the past year have not fully baked in with the average American yet," he said. "And it takes time for them to learn about legislation after it passes,” he said.