In 2019, celebrities including Lori Loughlin and Felicity Huffman made headlines when the FBI uncovered a college admissions scam which implicated dozens of parents, students, and college administrators. At the center of the scam was Rick Singer, who exploited the admissions system.

Based on real conversations that took place between parents and Singer derived from wiretapped phone calls, as well as interviews with former clients of Singer, Netflix’s Operation Varsity Blues: The College Admissions Scandal is an attempt to unravel the mystery behind his “business.”

The “business,” in question, was Singer’s educational counseling company. For a fee, he’d help “coach” kids through the college applications process. In reality, and as we know now, Singer helped parents of rising college freshman scam their way into elite schools using “side doors.” One of his most infamous side door operations was two-part: parents would donate to a fake foundation also owned by Singer to hide any sign of bribe payments and Singer would later use this money to bribe both sports team coaches and college administrators into admitting kids as recruited athletes (and pay himself in the process).

In the example of the Loughlin case, Singer bribed a college administrator, padded the daughter’s resume with fake rowing credentials, and earned her entry into the prestigious University of Southern California. According to the doc, between 2011 and 2018, Singer received approximately $25 million in “donations” to his charity.

Come spring 2018, the dominos would begin to fall, and Singer’s scam would come to light. In his own self-interest, Singer would agree to cooperate with the FBI, ensnaring several past and present clients of his. 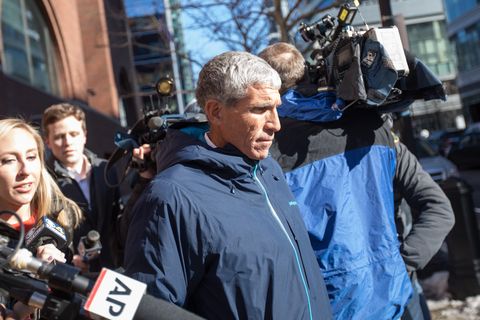 Where is Rick Singer now?

Singer pleaded guilty in March 2019 to four felonies: racketeering conspiracy, money laundering conspiracy, conspiracy to defraud US, and obstruction of justice. He is currently awaiting sentencing and will likely remain out of prison until the last individual in the college admissions scam is convicted. As for his whereabouts now, the last known video of him was taken in May 2020 by TMZ. He was stand-up paddle boarding in Newport Beach, California, just days before Lori Loughlin pleaded guilty to conspiracy to commit wire and mail fraud.