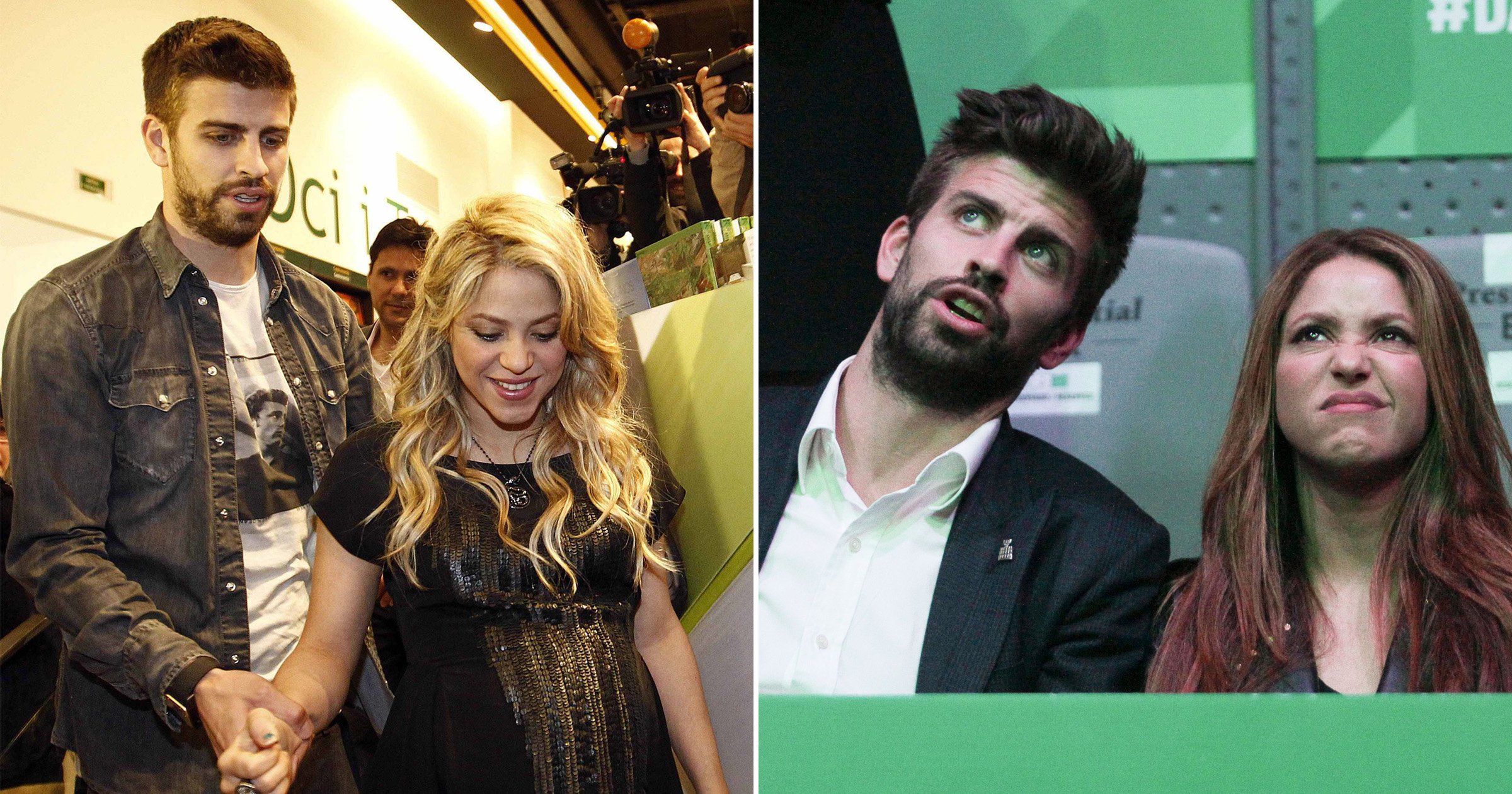 After an 11-year relationship, the news has emerged that singer Shakira and FC Barcelona footballer Gerard Piqué have separated.

The couple announced their split in a joint statement released via the Wherever, Whenever artist’s publicist, which read: ‘We regret to confirm that we are parting ways.

‘For the well-being of our children, who are our highest priority, we ask that you respect their privacy. Thank you for your understanding.’

The Colombian singer and Spanish athlete’s relationship dates back to 2010, when they first met on the set of a music video.

From their romance being made official to the births of their children, let’s take a look back at a timeline of their relationship.

In 2020, Shakira filmed the music video for her song Waka Waka (This Time for Africa), the official song for the 2010 Fifa World Cup.

Several footballers made special appearances in the video, including Cristiano Ronaldo, Dani Alves, Carlos Kameni, Lionel Messi, Rafael Marquez and Gerard – which is when the footballer and the singer first met.

After rumours circulated during the 2010 World Cup that sparks had flown between Shakira and Gerard, in March 2011, she appeared to confirm their relationship by sharing a photo of them together on Twitter, with the footballer’s arms wrapped around her.

‘Les presento a mi sol…’ she wrote in the caption, which translates to mean: ‘I present my sun to you.’

The month their relationship was confirmed after months of speculation, they were captured kissing by photographers, with the image printed on the front cover of Colombia’s Caras magazine.

Prior to Gerard, Shakira was in a long-term relationship with Argentinian lawyer Antonio de la Rúa, separating from him in August 2010 after they first got together in 2000.

Their relationship continued to go from strength-to-strength in the months after going public, with Gerard joining Shakira on stage and kissing her during her concert at the Lluis Campanys Olympic Stadium in Barcelona in May 2011.

He was also accompanied by several of his teammates, who were taught some dance moves by the singer in front of the enthusiastic crowd.

They made their first joint red carpet appearance in January 2012 to attend the Fifa Ballon d’Or Gala, which took place in Zurich Switzerland.

Shakira announced that she was expecting her first child in a statement shared on her website in September 2012, explaining that it meant she had to cancel a festival appearance.

‘As some of you may know, Gerard (Pique) and I are very happy awaiting the arrival of our first baby!’ she wrote at the time.

‘At this time we have decided to give priority to this unique moment in our lives and postpone all the promotional activities planned over the next few days.’

On January 22 2013, Shakira and Gerard welcomed their first child, a son named Milan Pique Mebarak, into the world.

A statement shared on the Hips Don’t Lie singer’s website read: ‘The name Milan (pronounced MEE-lahn), means dear, loving and gracious in Slavic; in Ancient Roman, eager and laborious; and in Sanskrit, unification. Just like his father, baby Milan became a member of FC Barcelona at birth.’

Around a year and a half after the birth of their first child, Shakira and Gerard revealed they had a second baby on the way.

‘Yes, we are expecting our second baby!! Thank you all for your well wishes,’ the musician wrote in a statement shared on Facebook.

‘The name Sasha is of Greek and Russian descent and means “defender of mankind” and “warrior”,’ the birth announcement read.

Sharing a picture of one of Sasha’s feet on Instagram days after his birth in February that year, Shakira joked that he had his father’s feet, writing in the caption: ‘It looks like I’ve been playing football my whole life.’

In September 2013, Shakira and Gerard shared a sweet moment with Milan on the football pitch ahead of FC Barcelona’s La Liga match against Sevilla FC, with the toddler matching his dad in his kit.

Couple don’t hold back from showing their passion – May 2014

While backstage at the Billboard Music Awards in Las Vegas in 2014, Shakira and Gerard shared a passionate kiss, showing no qualms with showing their passion to the world.

In May 2015, Shakira joined Gerard for a picture after FC Barcelona won the Copa del Rey Final match against Athletic Club, with the couple grinning from ear to ear as they celebrated the victory.

Tensions were high when Italy faced off against Spain during the UEfa Euro 2016 round of 16 match in June 2016, which took place in Paris France.

Shakira was photographed in the stands with her and Gerard’s two sons Milan and Sasha.

In late 2017, there was speculation that Shakira and Gerard had split.

Gerard shut down speculation that September by sharing a picture of his partner with their two sons, captioning the image: ‘Family time.’

Shakira and Gerard took their sons to a basketball match at Madison Square Garden in New York in December 2017, to watch the New York Knicks face off against the Philadelphia 76ers.

She was unable to attend the ceremony at Madison Square Garden, so she and Gerard celebrated the win by filming a video of them jumping on trampolines.

The video also showed the couple singing the song Me Enamoré from Shakira’s winning album El Dorado, which was all about how they met and fell in love.

Shakira supports Gerard as he retires from international football – August 2018

In 2016, Gerard announced that he would be retiring from international football after the 2018 World Cup.

When the time came for his retirement, Shakira shared a tribute to her partner on Instagram, writing: ‘Love, finished the stage that we will always keep in our hearts. One of the happiest moments of my life has also been seeing you win in 2010 with the national team and celebrate with Spain champions! Shak.’

Shakira opens up on experience of being depressed – November 2019

In 2017, Shakira suffered a haemorrhage of her right vocal chord, resulting in her being barely able to speak.

Recalling the difficult period of her life, she told The Guardian in November 2019: ‘There were times I couldn’t even get out of bed – I was so depressed.’

The singer’s voice eventually returned without her requiring surgery, which she said ‘felt like I was having some kind of religious experience’.

Opening up about what she was like at home, she said: ‘I was not positive. I was so pessimistic. I was a bitter person to be around,’ laughing as she added: ‘Gerard saw the worst of me.’

Ahead of her Super Bowl halftime show with Jennifer Lopez in 2020, Shakira and Gerard took part in an interview with CBS’ 60 Minutes.

Speaking about their relationship, the singer said: ‘To tell you the truth, marriage scares the s*** out of me. I don’t want him to see me as the wife. I’d rather him see me as his girlfriend,’ she said at the time.

‘His lover, his girlfriend. It’s like a little forbidden fruit, you know? I wanna keep him on his toes. I want him to think that anything’s possible depending on behaviour.’

A few weeks prior to their split being announced, Gerard was quizzed by Gary Neville on The Overlap podcast about why he and Shakira never exchanged their vows.

After over a decade together, on June 4 it was confirmed that Shakira and Gerard had broken up.

‘We regret to confirm that we are parting ways,’ they said in a joint statement.

‘For the well-being of our children, who are our highest priority, we ask that you respect their privacy. Thank you for your understanding.’