A BRIDE-to-be has raised a few eyebrows with her very unusual engagement announcement – and it’s not the ring that has got people talking.

Taking to social media, the newly engaged woman posted a photo of her glistening rock. 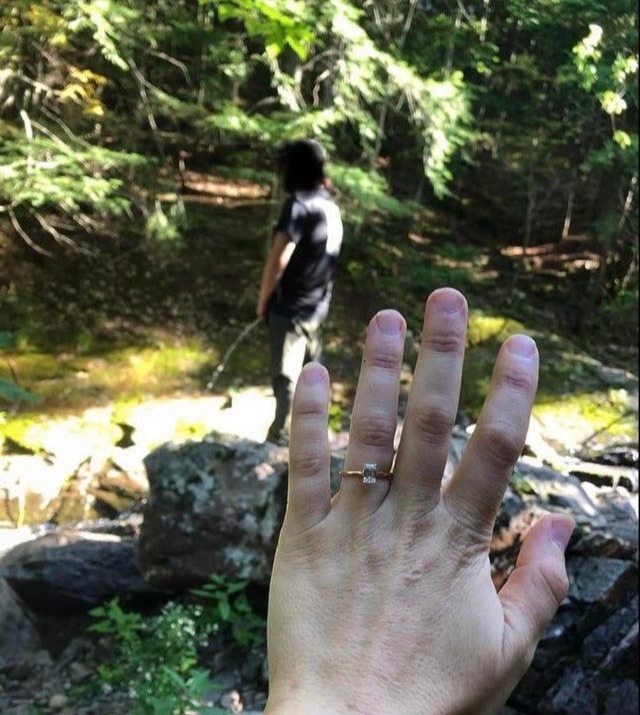 However, it seems that the woman may have been joking as the background of her photo leaves a lot to be desired.

As the bride lifts her dazzling diamond up to be photographed, her hubby-to-be chooses that exact moment to relieve himself in the background.

Commenting on the snap, one wrote: “For a second I thought he was fishing :/”

“At least she knows what to expect….” joked another, while a third added, “this post got me really p***ed off.”

However, some failed to see the funny side.

One commenter said: “Her engagement picture has her fiancee taking a p** in the background, feels pretty trashy.”

In other wedding news, this bridezilla was slammed for wanting to exclude childhood best friend as her maid of honour – because she has ‘bad teeth’.

Plus, a ‘Covid bride’ vows coronavirus won’t ruin her day… by getting her guests to play dead in wedding photos.

And this bride and groom were shamed for ‘cattle brand’ wedding cake which looks like a ‘crusty, infected nipple’.