BY THE age of 40, Katie Glass was convinced that she would be settled down in her own house – a Georgian mansion in Hampstead to be exact.

However, the self-described middle class writer has ended up in a caravan in a Gloucestershire that is smaller than her old kitchen. 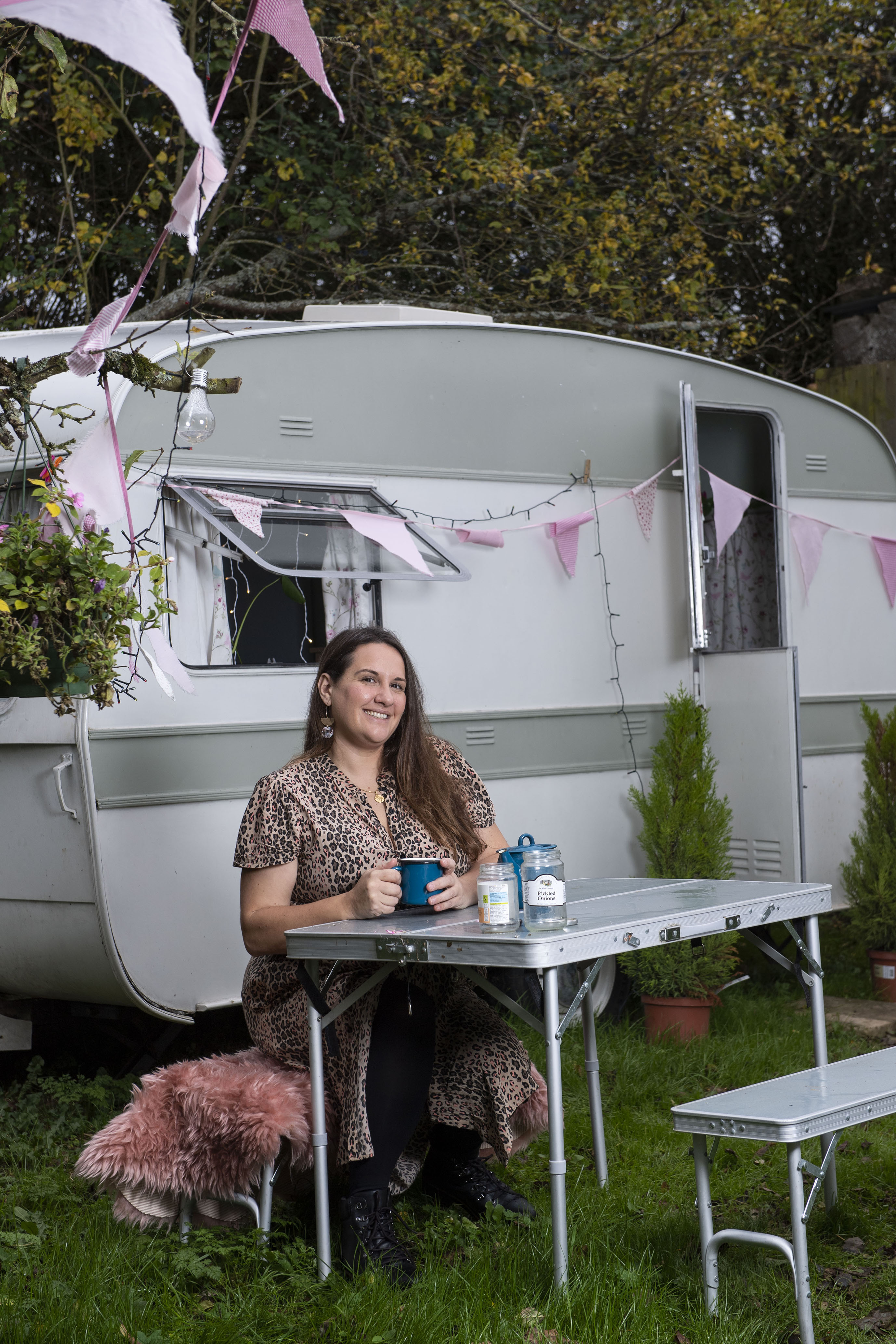 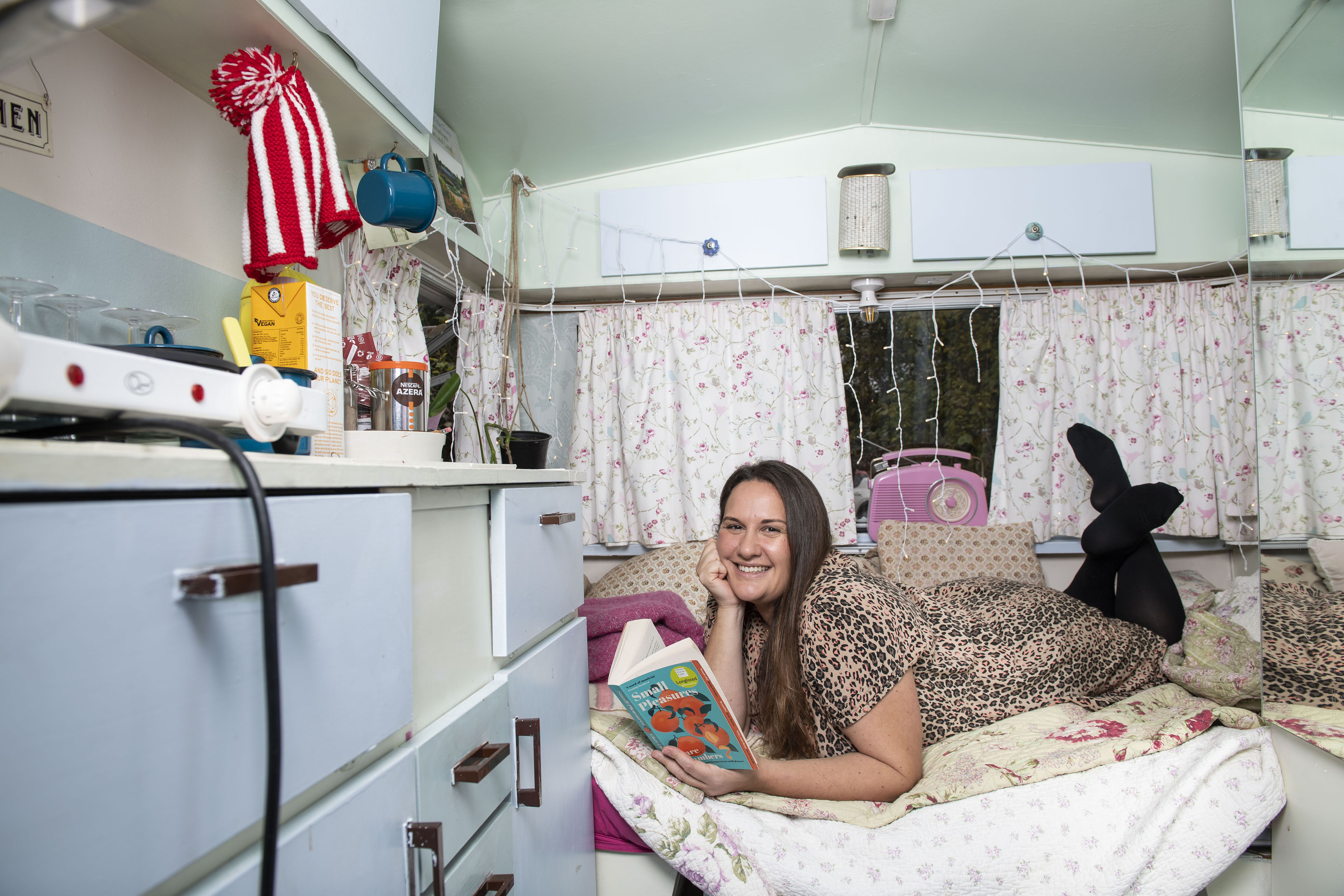 However, as she explains here, she’s never been happier…

If I stretch flat out on my back on my bed pointing my toes so the tips brush the wall, I can make the top of my head lie flat against the wall opposite.

The whole length of the room I live in is only as long as I am. I have forgotten what it feels like to stand inside and put your hands up over your head. Swing a cat? I can’t even stand in my caravan and spin on the spot without hitting something.

Physically, you could say living in a caravan is limiting. It is not the property dream we were sold. What with lack of security, the freezing cold nights and the ignominy of having to wee in a bucket. Investment? Forget it!

If you’d told me at twenty that at 40 I’d be living in a caravan I’d have told you where to shove it.

I was hustling my way up the corporate ladder in London dreaming that one day I’d own a fancy pink Georgian mansion in Hampstead. And yet right now instead I am living in a space smaller then my old kitchen in London was. Perhaps more oddly still, I’ve never been happier.

Two years ago, I was living in Dalston, before that in a flat in central Soho, just off Carnaby Street. Then, I was obsessed with city life. My dad had lived in Soho until his 80s.

I was an equally enthusiastic urbanite– out every night, rarely eating at home, regularly skiving off at lunchtime to go to The Tate, heading out to the theatre several times a week, more often ending up at some sticky-floored East-London nightclub. But in lockdown, when the city was shut I began dreaming of open green fields.

Stuck in a small studio flat going crazy I pictured myself with a cottage in the country and so decided, on something of a whim, to sell my flat in Dalston and move to Cornwall.

Except it didn’t quite work out like that. As they say ‘if you want to make God laugh tell him your plans’. Amidst an urban exodus, fuelled by the stamp duty freeze, the housing market became a bin fire. The houses I tried to buy in Cornwall fell through.

I relocated to Somerset and after months wasting my wages on a succession of extortionately priced Airbnb’s decided something had to give. So I cut my losses and bought a caravan to live in.

My caravan is a pink sweetie box covered in fairy-lights: a vintage two-tone 1970s Abbey caravan with large bay windows. Inside it has a checkerboard Formica floor like a 1950s dinner, glitter flock wallpaper, egg-shell blue cupboards and a pearlescent kitchen. It is a cheesecake Barbie Dream Home.

The kind of caravan you’d expect to see Bettie Draper from Mad Men holidaying in. If my mother saw it she would not be even slight surprised by how childishly I love it because it is exactly the kind of place I wanted to live when I was seven years old.

The sisters I bought it from christened her ‘Maggie’. They handed her over stuffed with pink: Pink rose-bud curtains, pink flower cushions, pink throws, a pink radio and pink gingham bunting. I added endless fairy lights.

So now the van is like a giant flashing strawberry milkshake, so twinkly  bright that it is hell to wake up in with a hangover but heaven to fall asleep in amongst the blinking lights.

There is something perculiarly British about #caravanlike. On Instagram #vanlifers are tanned, slim Australian girls posting pictures of themselves doing yoga at sunset on the roof of an VW on the beach. #Caravanlife is British couples drinking tea in a rainy, cold caravan park in Wales.

On Instagram #vanlife conjures a nomad existence waking up to sunrise on a cliff top or falling asleep to the sound of waves on a beach – this is easier to do if you are #vanlifing in Australia than it is if you are in England in winter.

I quickly realised that I can’t face the idea of constantly moving the van, like a snail with my house on my back, so instead I’ve moved the caravan between plots of land owned by people I’ve met.

At one point I was living in the caravan in a car park on a hipster industrial estate in Frome – by a café where I could get oat lattes for breakfast and by the train tracks where cargo trains chugged at night.

Now I’ve got the van parked in a lovely lady’s field where another friend of mine already lives in a caravan. It’s tucked into an orchard, under a damson tree, near a field of sheep and goats. I’ve hung my bunting outside, and covered the trees with multicoloured fairy lights so it feels like a magical space.

When I tell some people that I am living in a caravan they look horrified. Others look impressed (or perhaps I’m kidding myself). Some think it must be a joke. Everyone wants to know about the loo situation – the answer to which is there is actually a loo in the caravan but I prefer not to use because I can’t stomach the thought of emptying it, so I use an outside loo instead.

It is ironic that when I sold my London flat to move the countryside I did so because I wanted more space. I am now living in an area smaller than my old galley kitchen.

Although obviously there are advantages to being able to make a cup of tea from bed. In estate agent speak it would be a bijou, a country pied-a-terre. At times it can feel like one of those Japanese coffin hotels.

Still, it’s surprising how quickly you get used to living in a tiny space. Now every-surface has to multitask – so my bed can also be a table, my fridge a desk, and a cup is a bowl or a vase or a jug. When I first moved into the van I ruthlessly culled my possessions but now the weather is colder I find myself stuffing jumpers and thermals into any spare space.

There is an extremely limited plug situation so it is often a choice between having the heating on heating or the fairy lights. The culinary landscape is limited although was vastly improves when I bought a plug-in two-hob, discovering a new world of one-pan meals. I have taken WFH up a level so now mostly I work from bed. Why bother with the long commute all the way across the caravan, two strides, to the desk.

It is sometimes hard to keep up the veneer of city respectability from the van, but I try: Heading to the nearby gym to get ready before Zoom meetings or “showering” from a bottle of water before seminars (I sometimes work for a university).

I have spoken to editors as I have sat in my bed watching the goats escape from their field and make a run for the flower beds. The signal is unpredictable. But really who cares.

Never before have I sat at my desk writing looking out to sheep nibbling fallen apples, or closed my eyes during a conference call and hear the birds tweet. The van maybe tiny but it only encourages me to get out of it.

The major upside is I am saving a fortune. No council tax. No bills. My major outgoing is the £35/ a month wi-fi hotspot bill – I may be living in the wild but I still have to be able to stream Netflix.

I have only brought one date back to the van, who was rather charmed by it. But I cannot recommend trying to have sex in what is barely a single bed made from a slim plank of wood. Still, if you like cuddling then it’s a proper little love shack.

There are some van nightmares. Like when my friend gor a rat in her van, giving us insomnia for a week. One morning I woke up to find my pillow soaked and discovered a leak pouring through the roof – fortunately no match for my DIY skills as I hastily fastening a towel over it with electrical tape.

I bought the van during the Indian summer, falling for a dream of myself camped in a field surrounded by blossom – rather than the reality of living in a tin can in winter having to defrost the door to get out.

I was never a worshiper of Instagram’s #vanlife dream but rather someone who had van life thrust upon them.

What I didn’t expect was how much I love it. The cosy nights, comfortable and snug in the van which I’ve insulated with pink sheep-skin throws and heat with a plug-in oil radiators so that it becomes so toasty sometimes I wake up boiling at night.

I love the way that while I’m working my mind can wonder out to the fields that surround me. Or making fires with my friend in the van alongside me that we sit around at night.

Or when it’s too cold we head to her van, put on Shirley Collins and dance up and down the tiny aisle, joking about how the floor hasn’t collapsed yet.

Now the van feels like a home but in a way it’s better because it’s filled with possibility too – that at any moment we could move on. In that sense it’s less scary than a house with a mortgage, the slow death-march through suburbia. 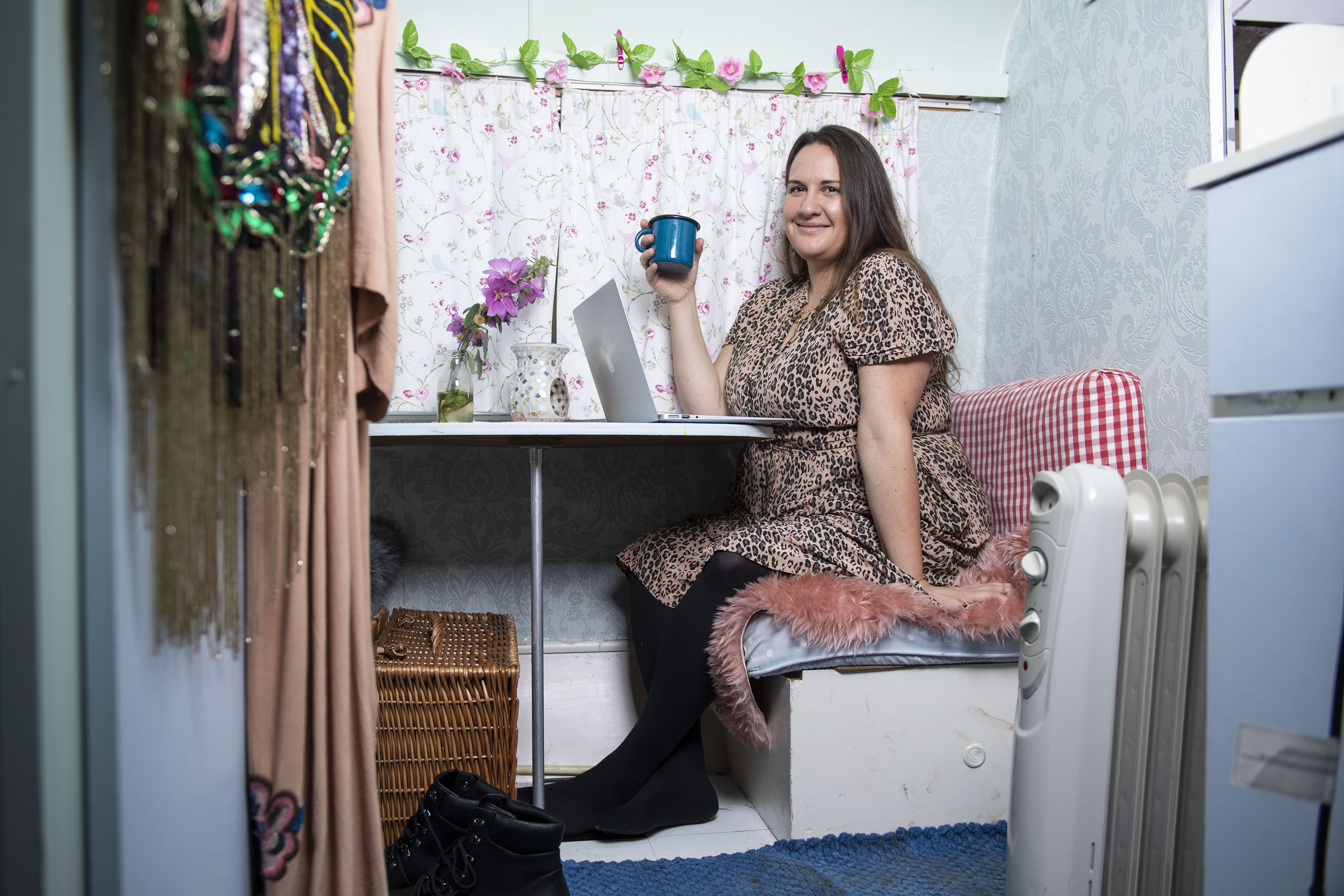