While many couples are betwixt and between about marrying during the pandemic, Prabal Gurung has made the decision to dive into bridal.

”Why not?” was his response. True to form, the bridal collection — just like everything else Gurung does — is not just centered around fashion but also culture, inclusivity and sustainability. Creating a substantive conversation around the brand is his modus operandi, said Gurung, adding clients and friends who have been knocking at his door for him to venture into bridal want to wear a designer who stands for something and believes in something.

While the New York-based designer has done wedding gowns for private clients through the years, this is his first full-fledged bridal line. Accustomed to developing custom pieces via the Atelier Prabal Gurung collection for an extensive group of well-heeled clients, he has been mulling over getting into the category for a while. Friends and clients have also been inquiring pretty much since his solo career started. “It’s [been] a constant thing,” he said.

After hearing from newly engaged friends and friends-of-friends about how their wedding plans were put on hold “for the foreseeable future” due to the coronavirus crisis, Gurung said he wanted to take on the responsibility of “properly celebrating all those incredible individuals who have walked in our lives and their moments. I always say my job as a designer is to liberate anyone who identifies as a woman and to offer them options,” he said. 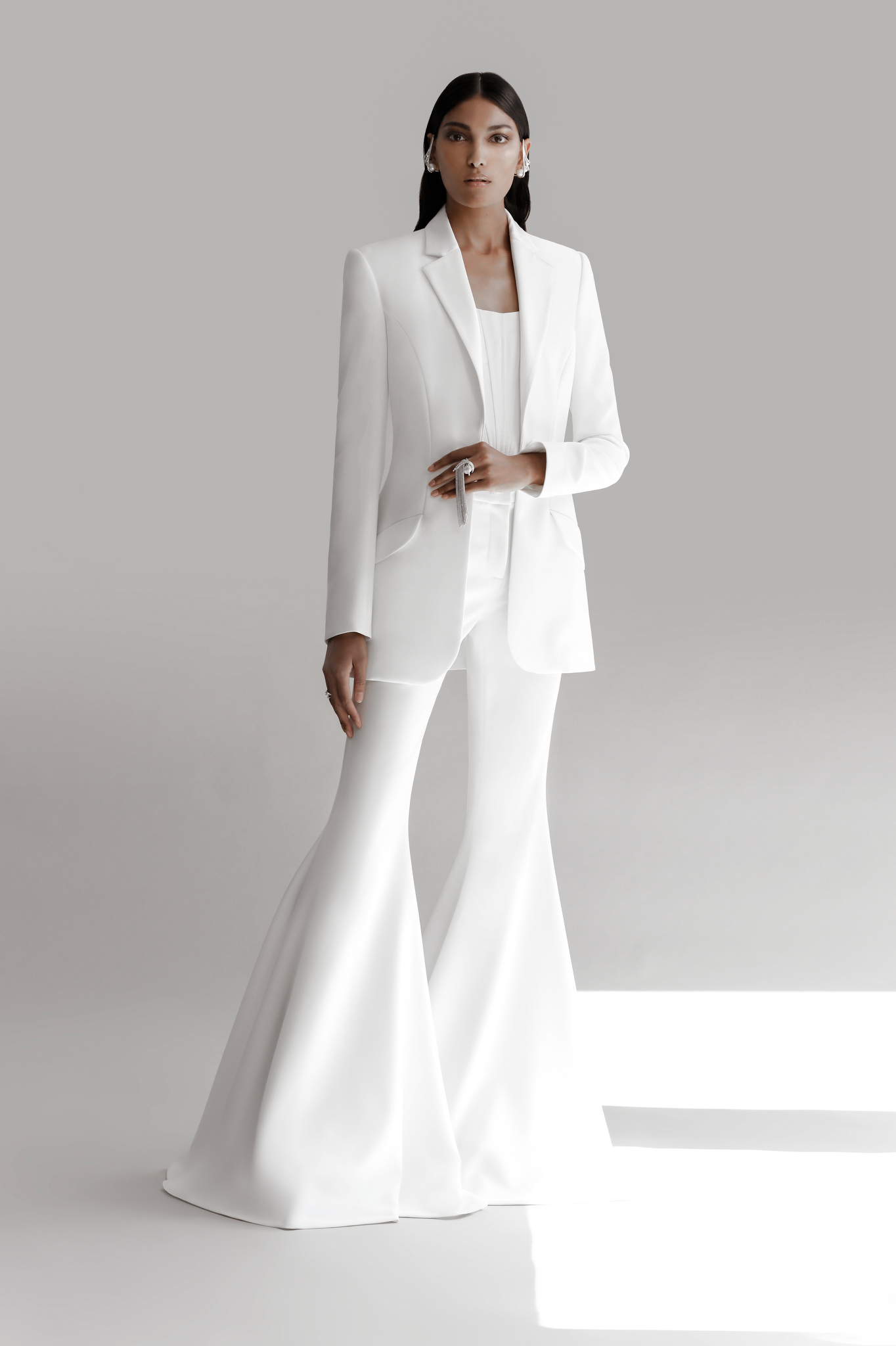 The dresses are being made in New York. Courtesy of Prabal Gurung

Rather than rush into bridal, Gurung said he wanted to learn what someone’s psyche is when the spotlight is on them. Working on special occasions, red-carpet or Met Gala dresses with celebrities, actresses and other women has allowed for that. “In this day and age, I felt what is stronger than to be in love and to love? Love starts with first falling in love with yourself. I talk about this with my ready-to-wear whether it was my last collection, which was an ode to New York City,” he said.

About 90 percent of the designer’s rtw is made in the city. The 12-piece bridal collection is also New York-made. Born in Singapore and raised in Nepal, the designer started his company in Manhattan years ago. “New York is my home and has been my home for a long time. I always felt this immense responsibility to give back to the city,” he said. “The city is a colorful bowl of salad of eight million impossible dreamers. I also wanted to be sure that this collection that was done with so much care was inspired by New York and my love for individuals. It’s my responsibility to be sure that I contribute to the industry. There is a magic to made in New York. Made with love in New York. What more can I say?”

With retail prices ranging from $2,895 to nearly $10,000, the collection is being offered in a range of sizes. Some designers see the upside of bridal as being higher-ticketed items, which can mean the sale of one wedding gown could be comparable to selling 20,000 jackets. Asked about that, Gurung said, “Obviously, those are hard facts. There is a really healthy reach for opening designer price points for bridal that goes up [from there]. For me, a high-ticket item allows me to really go into the craftsmanship and indulge in making it special. There are other factors. I wanted this collection to be versatile in size, wearability and price.”

To relay a sense of inclusivity, Gurung chose an Indian model Pritika Swarup to debut the collection. “I wanted her to be representative of what does America look like in this current climate. What do we look like?” 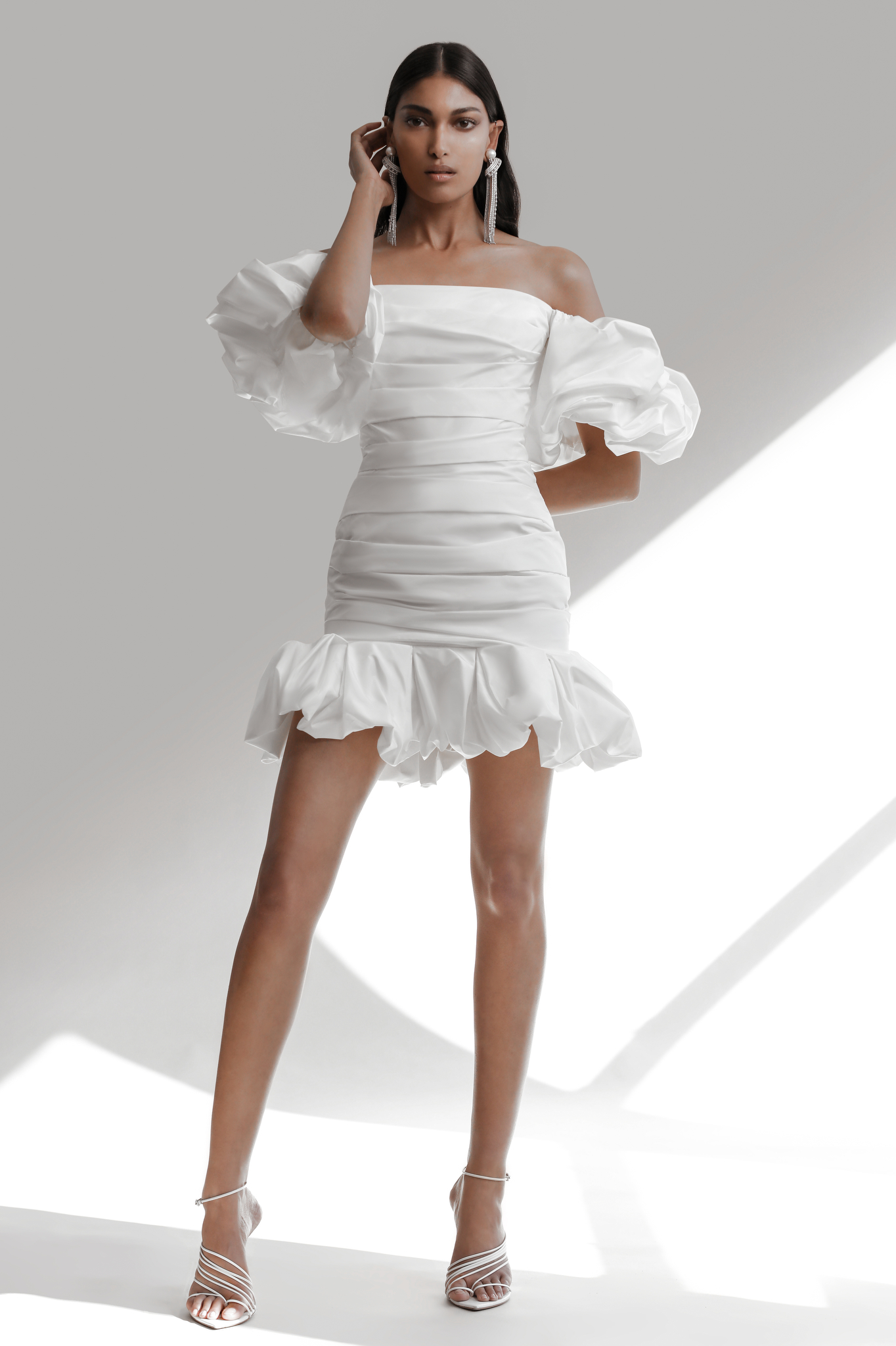 A look from the designer’s new collection. Courtesy of Prabal Gurung

The collection’s versatility lends itself to sustainability in that the gowns can be handed over to whomever wants to wear it over a period of time. “As the world is having a conversation about sustainability, sustainability is not just about the fabrics that you use. It’s about where you make a carbon footprint, who makes it and what is the life cycle of this garment,” Gurung said.

Acknowledging how passing a dress from one generation to the next was the norm for decades, the designer said he helped a friend who was getting married to make a few adjustments to her mother’s gown to make it look more current. “That made me think about the longevity of this — the longevity of the story, not just the gown or the outfit, but the moment that led to it,” Gurung said.

To that end, the strapless ballgown has a detachable beaded piece to cover the wearer’s arms in a church. A poufy gown has a detachable skirt so that the style can also be worn as a short cocktail dress. What looks like a corseted gown is a corset with a skirt for added versatility. Not interested in making the line “crazy avant-garde,” which is not his thing, the designer wanted it to be glamorous, beautiful, functional, detailed and made with quality fabrics. That required thinking about what friends would want to wear on their weddings days and how he would like them to be seen.

“I just wanted them to feel absolutely in love” Gurung said. “At the end of the day, when there is a Union — whether it is through marriage or a relationship — love is the ultimate resistance to this uncertainty that we’re living in. Love gives way to joy, and joy gives way to hope and optimism.”