Who’s who in the Royal Box? Regé-Jean Page and Rami Malek rub shoulders with royals, tennis greats and entrepreneurs at Wimbledon… but how many faces do YOU recognise?

It is one of the hottest tickets in sport, so it is of no surprise the Royal Box was packed with a dazzling array of stars as the Wimbledon men’s semi finals got underway this afternoon.

Princess Beatrice and Edo Mapelli Mozzi rubbed shoulders with Bridgerton star Rege Jean Page and Emily Brown, while Marcus Waering and his wife and Melinda Gate and her plus one Joe Cerell observed Cameron Norrie square off with Novak Djokovic on Centre Court.

Along the front row it was largely royal invitees, with regular fixtures Princess Michael of Kent and the Duke of Kent taking their seats alongside the Duchess of Gloucester and Princess Margaret’s son Lord Snowdon.

Rousing calls were heard from the stands as the action unfolded on the Court. 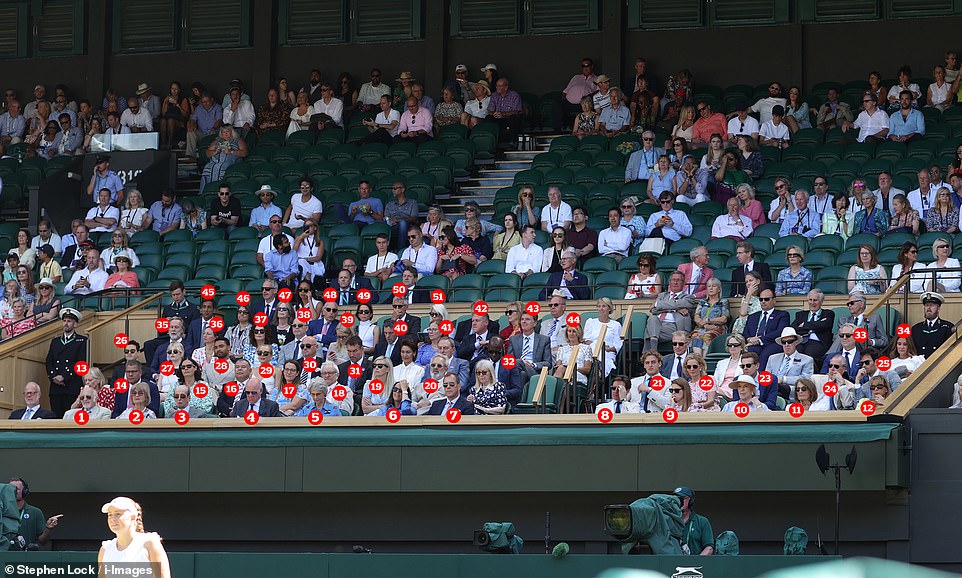 1 and 2. John Newcombe and Gogi Liban

Australian tennis ace John Newcombe is a former world number one, 26 Grand Slam titles winner and official legend of the Sports Australia Hall of Fame. He won at Wimbledon three times – in 1967, 1970 and 1971. He took part in the Centre Court Centenary Ceremony. He sat alongside Gogi Liban, who works for Sky. 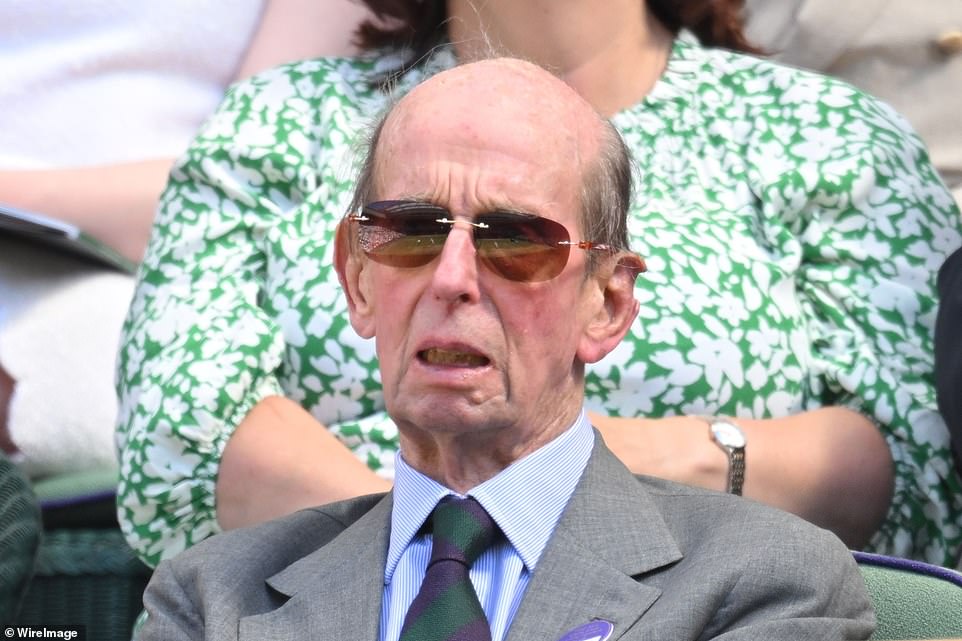 Prince Edward, Duke of Kent, who was wearing a stylish pair of sunglasses, gave all his attention to the court

The Duke of Kent, 86, is the first cousin of Queen, and married to Katharine, Duchess of Kent, also 86. As a close family member of the Monarch, He is often spotted at royal events.

Ian Hewitt is the chairman of the All England Lawn Tennis & Croquet Club, which hosts Wimbledon every year.

Brigitte, Duchess of Gloucester, 73, is the wife of the Duke of Gloucester, a first cousin of the Queen. The Danish-born royal is a full-time working member of the Royal Family and travels extensively in her role.

Ditlev  Ahlefeldt-Laurvig is the director of Ogilvy Healthworld, a company that specializes in strategic and tactical branding and communications for the pharmaceutical industry. He was accompanied by his wife Christian 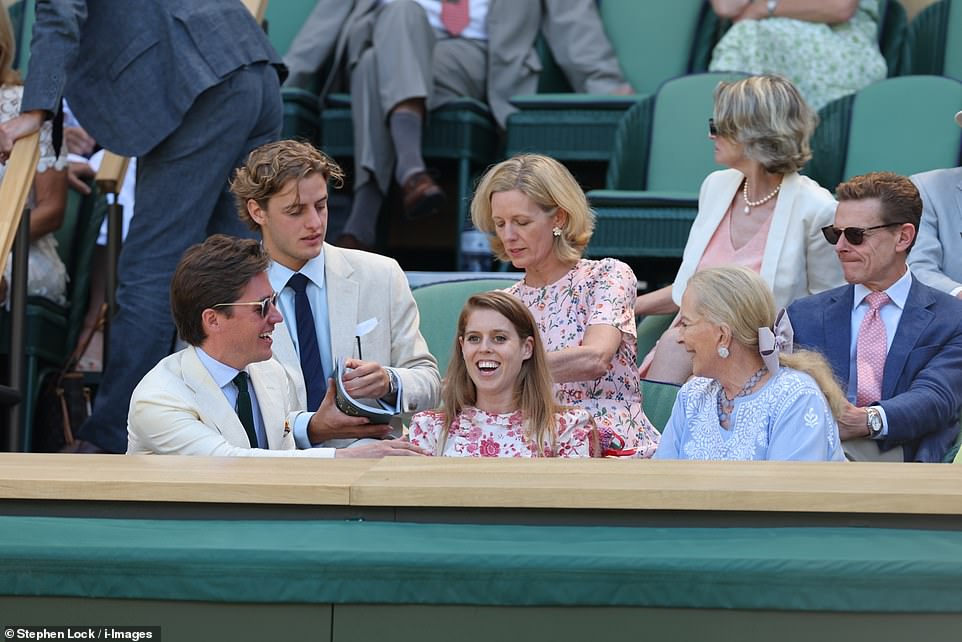 The 74-year-old royal has been married to Prince Michael since 1978. Sometimes known as ‘Princess Pushy’ for her imperious ways, Princess Michael recently saw her daughter Lady Gabriella Windsor married to Thomas Kingston.

The socialite Lady Annabel Godsmith and Mrs Rebecca Howard were the plus ones of Princess Michael.

Annabel rose to prominence on the London social scene in the 1960s. In the 1970s, she entertained an affair with Anglo-French financier James Goldsmith, who became her second husband. 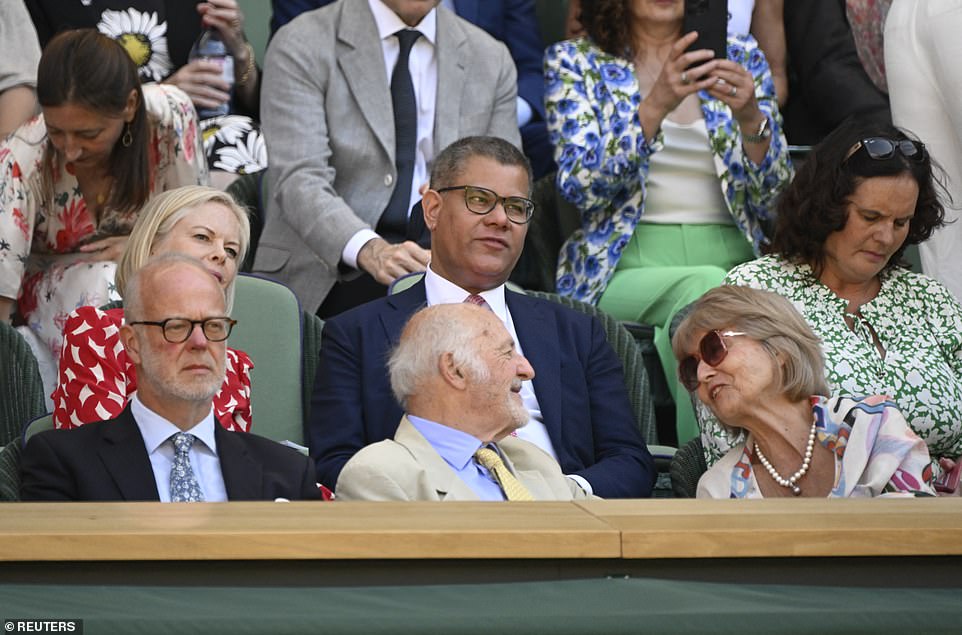 Conservative MP President Alok Sharma, 54 and his wife, attended the tournament, sat next to Jonathan and Karen Van-Tam

Politician Alok Sharma, 54, has been an MP since 2010, but rose to become a household name when he became President of COP ahead of COP26 last year in Glasgow. His wife Ingela was sat alongside him.14 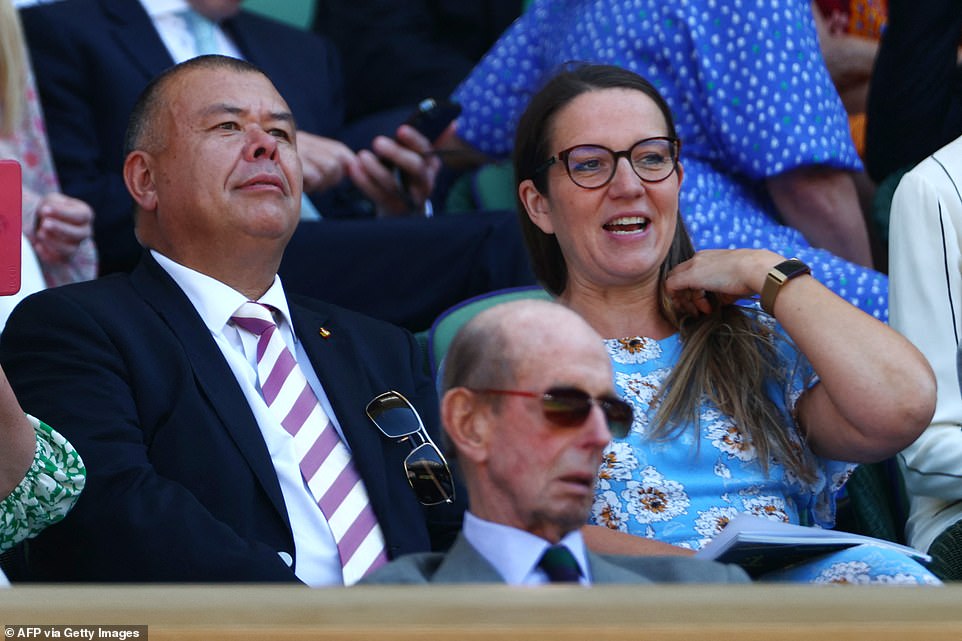 Professor Sir Jonathan Van-Tam became a Deputy Chief Medical Officer for England in 2 October 2017. However he is best known for his leadership during the UK’s response to the Covid pandemic which started in 2020, as one of two deputies. He often attended press conferences and offered details of the pandemic to the public. He stepped down at the end of March 2022. He was joined at the tennis by his wife, former nurse, Karen

Nobel Prize-winning geneticist Sir Paul Nurse is a former president of the Royal Society and chief of the Francis Crick Institute. He was sitting alongside his daughter Sarah, who works for ITV. 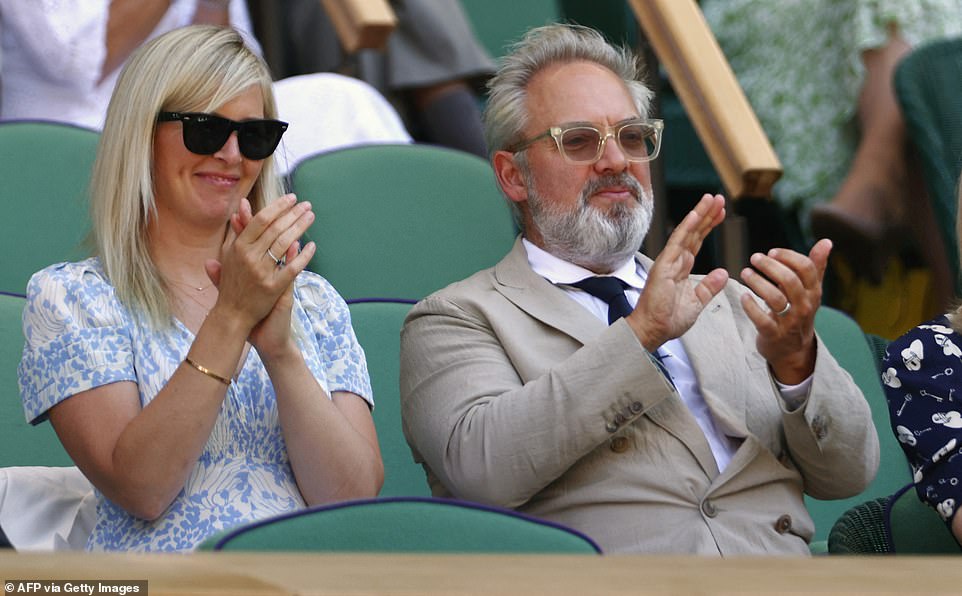 Filmmaker Sir Samuel Alexander Mendes also attended and was seen enjoying the action next to his wife, Alison Balsom, left

Filmmaker Sir Samuel Alexander Mendes is a British film and stage director, producer, and screenwriter known for directing films including Skyfall, 1917 and American Beauty. In 2000, Mendes was appointed a CBE for his services to drama, and he was knighted in the 2020 New Years Honours List. Sam has been married to trumpet soloist and producer Alison Balsom since 2017 while he married to actress Kate Winslet from 2003 to 2011. 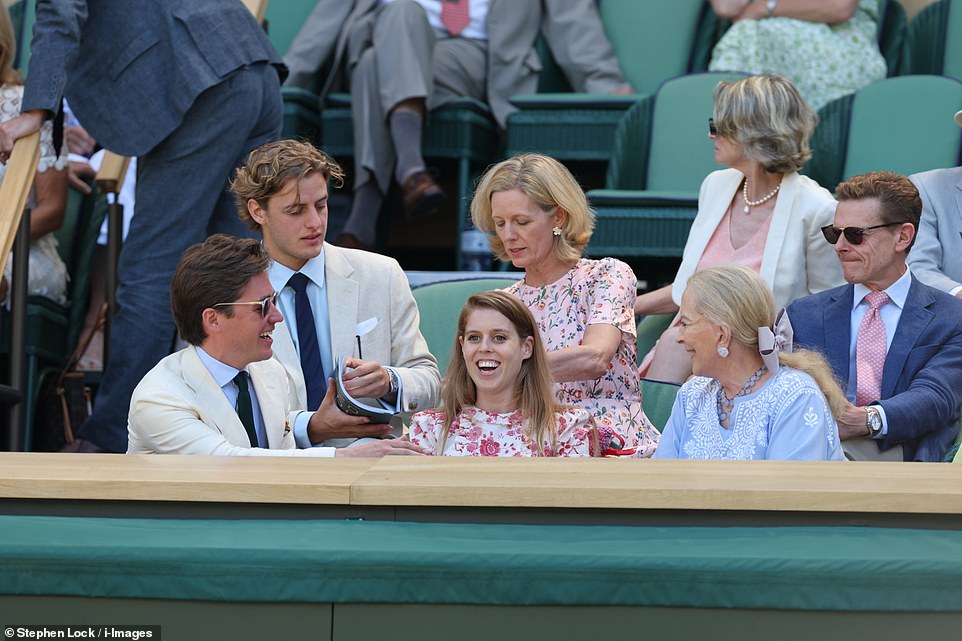 The British landscape architect James Ogilvy, who is the elder child and only son of Angus Ogilvy and Princess Alexandra of Kent and therefor related to the royal family, attended with his son Alexandre and his wife Julia.

Son of Princess Margaret and photographer Antony Armstrong-Jones, 1st Earl of Snowdon, Lord Snowdon is a furniture designer and former chairman of Christie’s. He is married to Serena but attended without her today. 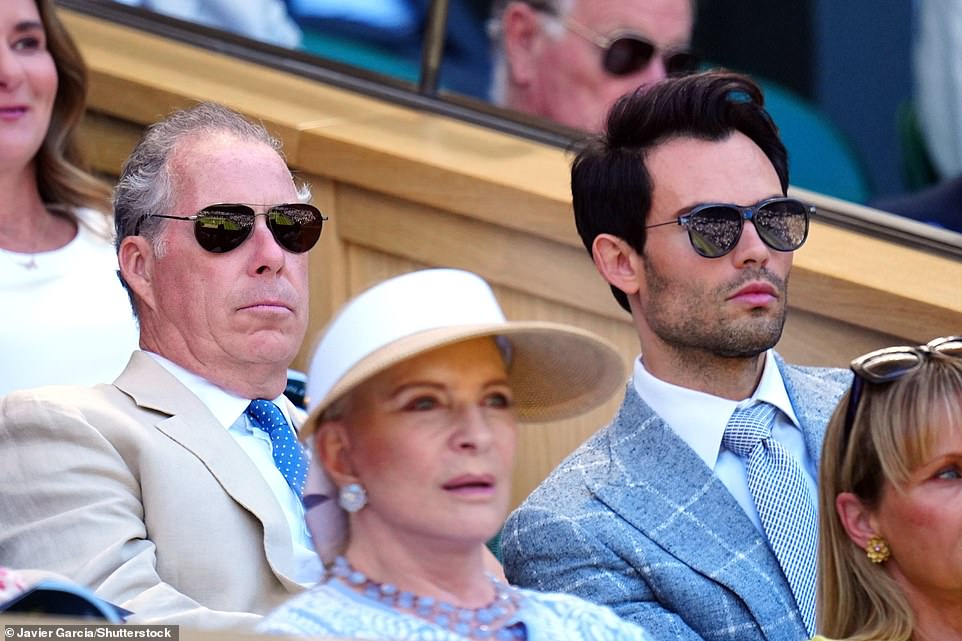 Princess Margaret’s son Lord Snowdon attended the tournament, sitting next to Made in Chelsea star Mark-Francis Vandeli this afternoon

Made in Chelsea star Mark-Francis Vandelli was also in the Royal Box. The 32-year-old T personality has been a member of the semi-reality show since its first season and a fixture ever since. 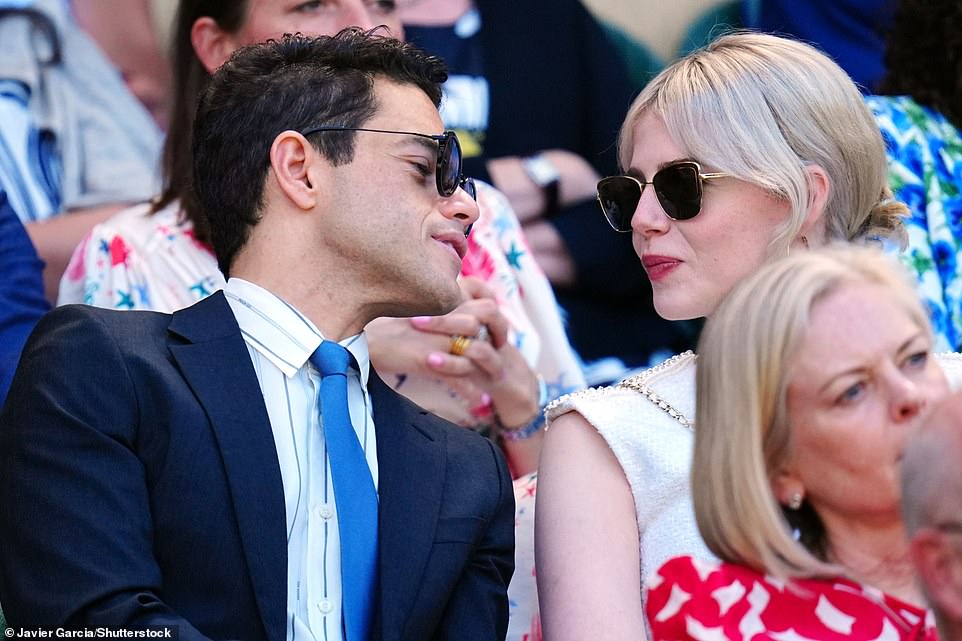 The No Time to Die star Rami Malek attended with the actress Lucy Boyton, with whom he worked on Bohemian Rhapsody

The Bohemian Rhapsody star attended with the actress Lucy Boyton. While Malek rose to fame with his role in Mr Robot and in James Bond’s No Time to Die, Boyton broke the screen in Netflix’s The Politician.

The pair both worked on Bohemian Rhapsody in 2019, with Malek playing Freddie Mercury and Boyton playing his friend Mary Austin. Actor Regé-Jean Page, 34, is best known for his role as The Duke of Hastings in the steaming Netflix romp Bridgerton. He was joined by his girlfriend Emily Brown.

Actor Regé-Jean Page, 34, is best known for his role as The Duke of Hastings in the steaming Netflix romp Bridgerton. He left after the second series, and is set to star in the upcoming Dungeons & Dragons: Honor Among Thieves film. He was joined by his girlfriend Emily Brown. 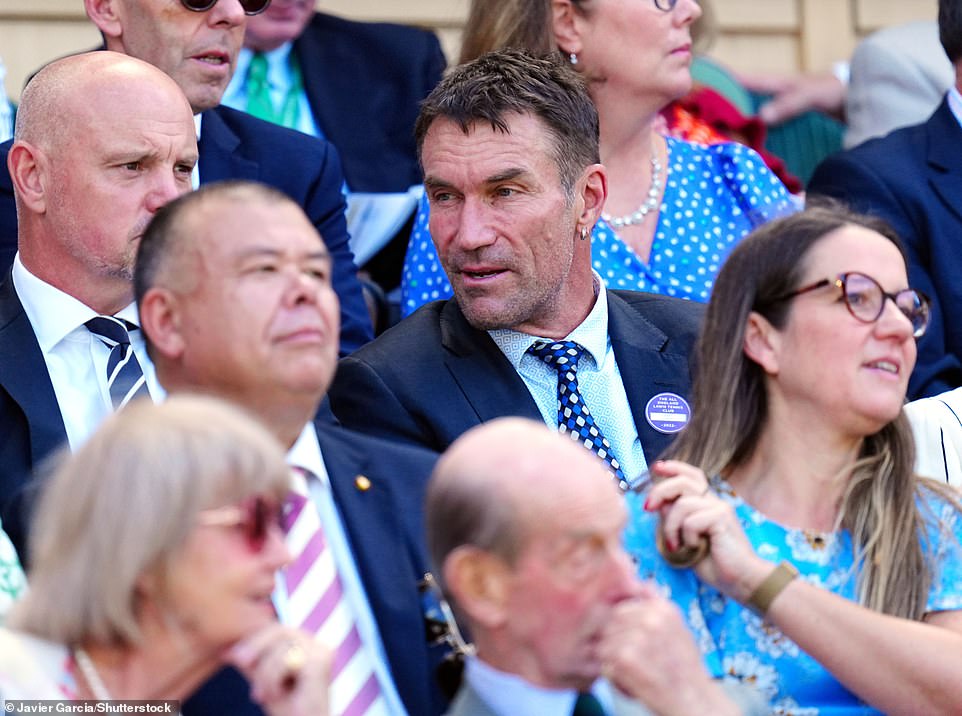 Australian tennis legend Pat Cash won Wimbledon in 1987 and was here to witness the action with Duncan March, who is the Managing Director of Rockpool Management Group, left

Australian tennis legend Pat Cash won Wimbledon in 1987. Earlier this week, he stepped out onto centre court for the centenary parade of former champions. He was sitting alongside Duncan March, who is the Managing Director of Rockpool Management Group.

BBC journalist Clive Myrie was joined in the royal box by Mary Barry. The presenter led the Corporation’s coverage in Ukraine at the start of the war and also hosts BBC2’s Mastermind quiz. 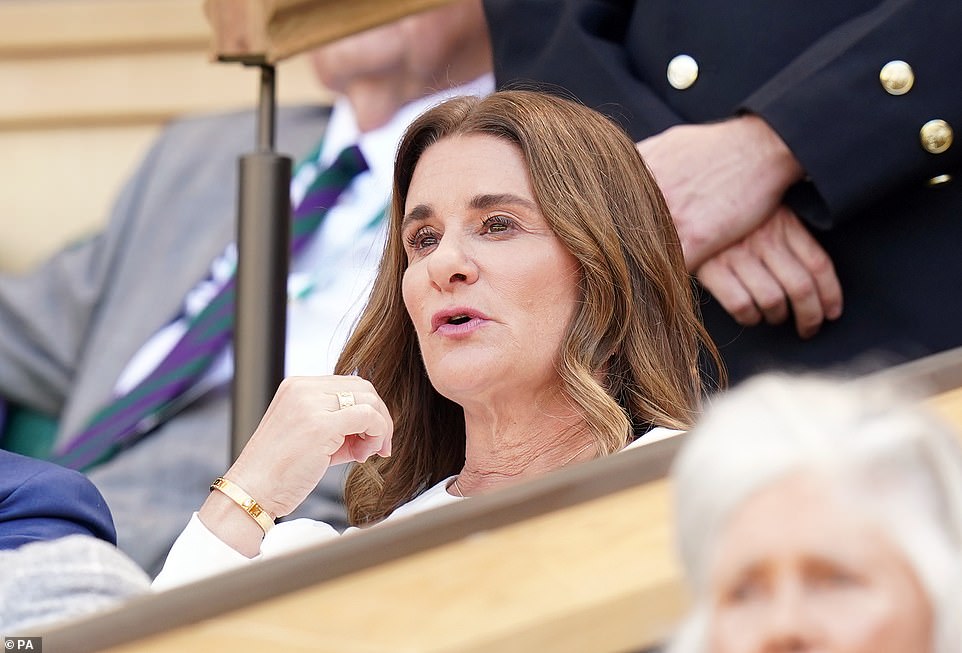 Melinda Gates attended the event with Joe Cerrell, who is managing director for Europe, the Middle East, and East Asia (EMEEA) for the Bill and Melinda Gates Foundation

Since her divorce from billionaire Bill Gates was finalized, Melinda has thrown herself into the fight for gender equality. She was joined at the tennis by Joe Cerrell, who is managing director for Europe, the Middle East, and East Asia (EMEEA) for the Bill and Melinda Gates Foundation. It is unknown if the pair are dating. 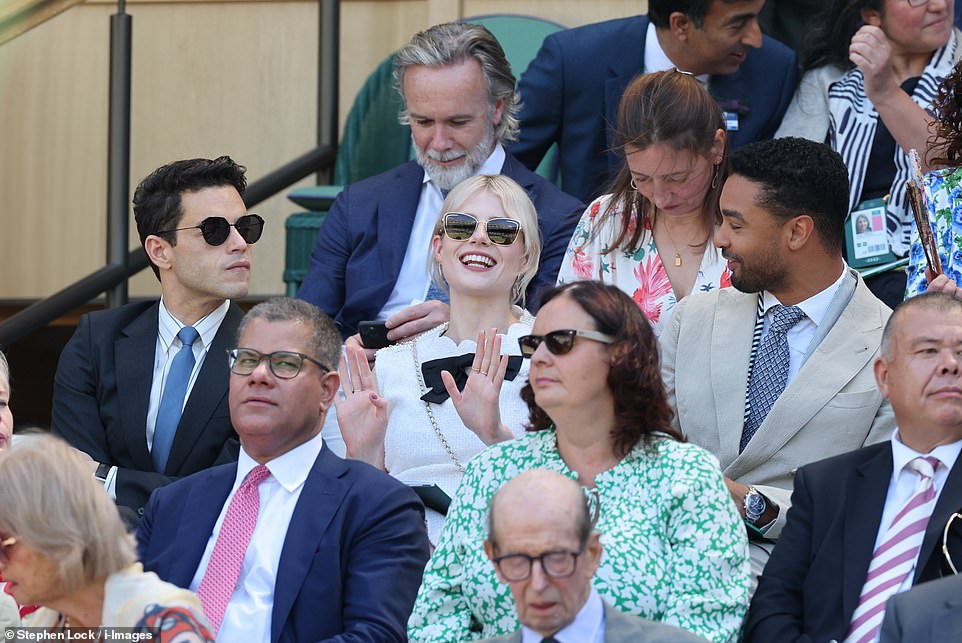 Marcus Wareing, 52 , is is currently Chef-Owner of the one-Michelin-starred restaurant Marcus in Knightsbridge. He was a protege of Gordon Ramsay. Since 2014, Wareing has been a judge on MasterChef: The Professionals, following the departure of Michel Roux Jr. from the programme. He was joined at the event by his wife, Jane.

Nick Read has been the global CEO of the Vodafone group since 2018, after a successful career in finance. He was accompanied by his wife Lisa.

Ian Stuart was appointed CEO of HSBC UK Bank plc, with effect from April 2017, and is a member of HSBC Holdings plc’s Group Executive Committee. The CEO was sat alongside his wife Phoebe.

ESPN executive Burke Magnus is president of programming and content at the company. He sat alongside his wife Colleen.

Former All England Lawn Tennis Club exec Mick Desmond was commercial and media director of AELTC, responsible for delivering all commercial and media activities for The Wimbledon Championships. He is also on an advisory board member at BAFTA. He was joined by his wife, Christine Desmond.

Anil Jhingan is President and Managing Director of Asia Pacific at Discovery, Inc. He was made a Non-Executive Directors on the LTA Board last year. He was joined by his wife Preety at the event.

Chairman Andrew Lowenthal is the Chairman of Queen’s Club, private sporting club in West Kensington, London. He sat with his wife Beatrice.

Businesswoman Jayne Hrdlicka has enjoyed a distinguished career in both the US and Australia. She is also chairman and president of Tennis Australia.

Gilles Moretton is a former French tennis player and the current president of the French Tennis Federation.  He was accompanied by his partner Veronique Dalex.