The Tiwi Islands have already made an indelible mark on Australian rules football, now an islander has made a literal mark on the Sherrin ball the game is played with.

Artist Jennifer Louise Coombes said it was “a real proud moment” to design the artwork on the footballs that will be used for the AFL Indigenous Round this week. Her traditional Tiwi design incorporates elements that symbolise strength and celebrate life and culture. 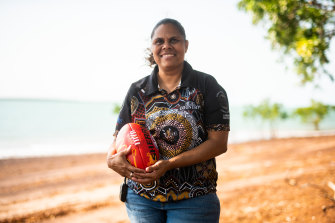 Unlike the Riolis, Longs and other famous names from the Tiwis who shone in the national football spotlight, Coombes – also known as Aunty Lulu – didn’t get her chance to play in the big league. But she did feature in more than 100 games as a sharp centre-halfback for St Mary’s Football Club in Darwin in the Northern Territory Football League.

“I’ve always wanted to paint the footy.” Coombes told The Age and Sydney Morning Herald. “To see it in reality is really amazing. A proud moment not just for me as a Tiwi person, but for the whole of the Tiwi Islands.”

Coombes grew up around footy in Pirlangimpi Melville Island before playing in Darwin. 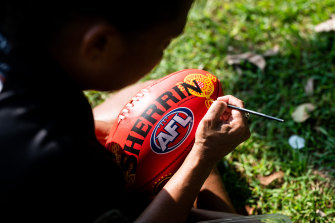 Aunty Lulu decorating one of the TW Sherrins.Credit:Kane Chenoweth

Her designs, which will feature on the match-day footballs used across the AFL’s Sir Doug Nicholls Round this year, include armbands symbolising culture and a spear element that Coombes says represents the mental and physical strength required of players “walking the AFL path in their footy careers”.

There are also rings representing Kulama – a traditional design celebrating life – and footprints that symbolise past, present and future Indigenous players, volunteers and others who have supported young Indigenous players and the game itself.

Some of VFL/AFL footballers from the Tiwi Islands

Coombes was mentored in many traditional art mediums and cultural knowledge throughout her school years by elders from across the Tiwi islands, but began focusing more seriously on her art after designing the Indigenous guernsey for the Hawthorn Football Club in partnership with the club’s former star Cyril Rioli in 2018 and 2019.

Since then, Coombes has designed uniforms for the AFL NT and her former club St Mary’s, as well as producing designs for basketballs and rugby balls, and has continued to create works in the mediums of painting and pottery, in addition to screen and lino prints.

Coombes’ is the second woman to bring a design to the Sherrin. Her artwork will feature for the next two years, carrying the ball forward from the work of Yuin artist Rheanna Lotter, who produced the design for 2019 and 2021. There was no Sir Doug Nicholls Round in 2020 due to the pandemic.

The AFL’s executive general manager for inclusion and social policy, Tanya Hosch, said the league was thrilled to have Coombes share her work with the permission of her elders.

“It’s very special to have the inclusion of Tiwi culture presented on the Sherrin given the history of excellence and strength of past and present players who come from the Tiwi Islands,” Hosch said.

The Sir Doug Nicholls Round celebrates First Nations players and culture within the AFL and around Australia. In 2021, the AFL extended the Indigenous round across rounds 11 and 12 of the league’s fixtures, which will see it coincide with the beginning of National Reconciliation Week, which begins on May 27 this year. 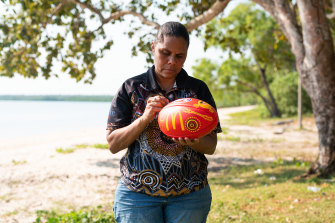 The round starts on Friday with the Carlton versus Sydney Swans match-up, followed by the annual showpiece Dreamtime match at the MCG on Saturday night between Richmond and Essendon, where Coombes will present the Sherrin bearing her design to the on-field umpires.

The second weekend of games will include a match played in Darwin between the Hawks and the Gold Coast Suns.

Sherrin will donate 15 per cent of proceeds of sales of the football each year to non-for-profit organisation AFL Cape York House in support of Aboriginal and Torres Strait Islander community programs providing educational, employment and training opportunities for young First Nations men and women from Far North Queensland.

“We always look forward to supporting the AFL with Sir Doug Nicholls Round and being able to provide them with a bespoke Indigenous designed Sherrin football,” said Collins.“We can’t wait to see it prominently feature across games around the country.”