Prince Harry will have left the Prince and Princess of Wales ‘feeling angry and betrayed’ after the Duke shared Kate’s personal text messages to Meghan Markle in his bombshell book, an expert has claimed.

In his new memoir Spare, which hit shelves yesterday, the father-of-two detailed messages that were exchanged between the sisters-in-law ahead of Harry and Meghan’s wedding in May 2018 over Princess Charlotte’s bridesmaid dress.

Princess of Wales allegedly Meghan over text that her daughter had been left in tears over her French couture dress which was ‘too big, too long, too baggy’.

In response, Meghan curtly asked the mother-of-three to take Charlotte to the tailor who had been ‘standing by since 8am’ at Kensington Palace. 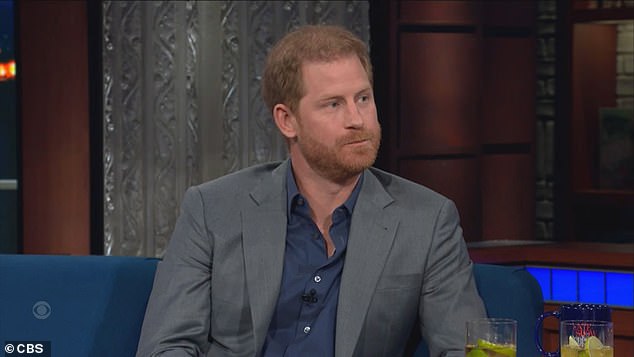 Speaking to the Mirror, royal expert Ingrid Seward described the Duke of Sussex as ‘childlike’ for publishing the texts.

The expert – who is the editor of Majesty magazine – said: ‘His aggression with Kate, the sister-in-law with whom he was once so close, is just a childlike payback for what he considers is her being disloyal to Meghan.’

Following their disagreement over the bridesmaid dresses, Prince Harry backed up Meghan’s claim from her Oprah interview last year that her sister-in-law then sent her a bouquet of flowers to apologise.

However, Ingrid said it would take much more than this for Harry to ‘make it up’ to the Prince and Princess of Wales following his book’s publication. 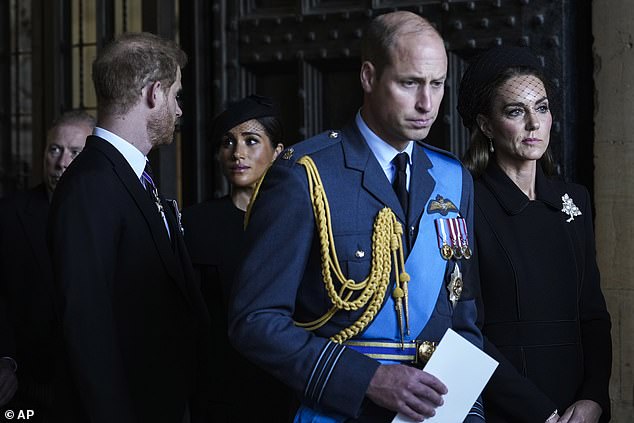 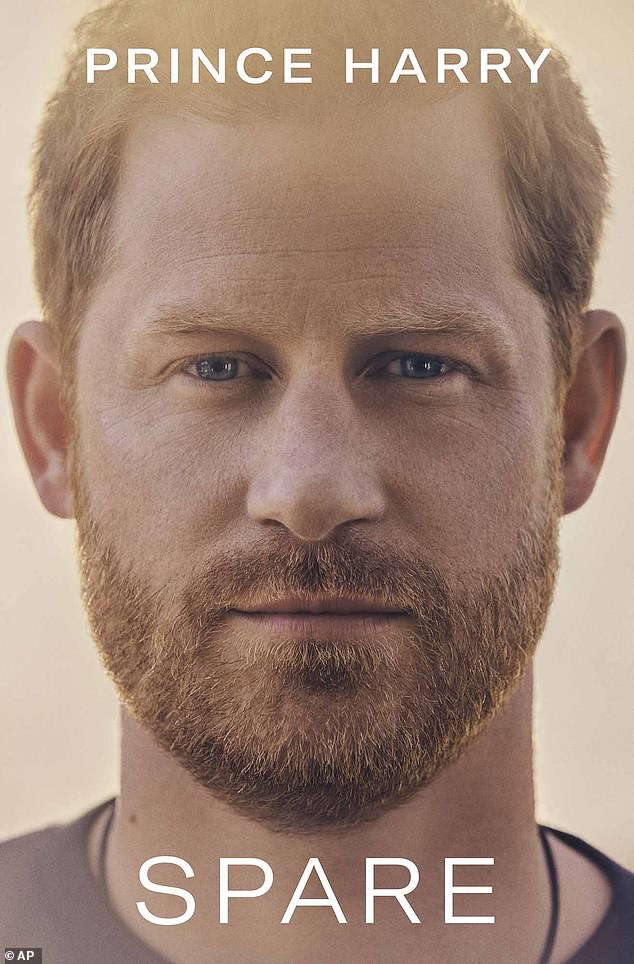 Prince Harry’s new memoir Spare went on sale yesterday. In the book, he describes how the Princess of Wales was among those in the Royal Family who ‘stereotyped’ his wife

She added: ‘They are surely feeling angry and betrayed that Harry decided to make money out of his immediate family in this disloyal way.’

Before delving into Meghan and Kate’s texts, Prince Harry reveals in his biography that his wife didn’t reply to the Princess of Wales’ query about the bridesmaid dresses ‘straight away’ as she had been ‘dealing with the chaos surrounding her father’.

On 14 May 2018, just five days before the wedding, Thomas Markle announced that he would not be attending due to health reasons. In the weeks leading up to the nuptials, the bride’s father had posed for staged photos near his home in Mexico, which showed him being measured for a wedding suit and researching Windsor at an internet cafe.

After informing Kate that she had arranged a tailor to sort Charlotte’s dress, the Princess of Wales allegedly told Meghan that her ‘own wedding gown designer’ agreed with her that the frocks should be remade.

Harry writes: ‘Meg asked if Kate was aware of what was going on right now. With her father. Kate said she was well aware, but the dresses. And the wedding is in four days!’ 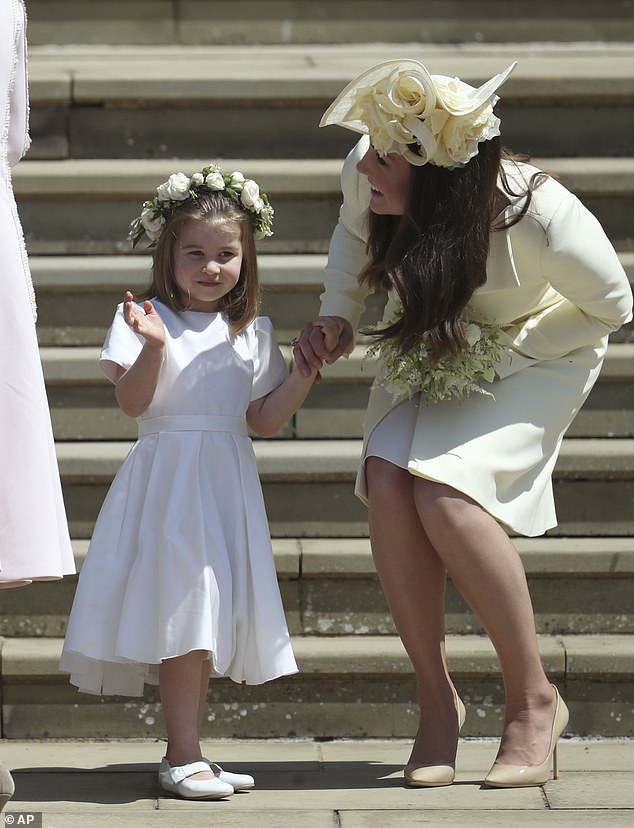 Pictured: Princess Charlotte in her bridesmaid dress after the Sussex wedding in 2018 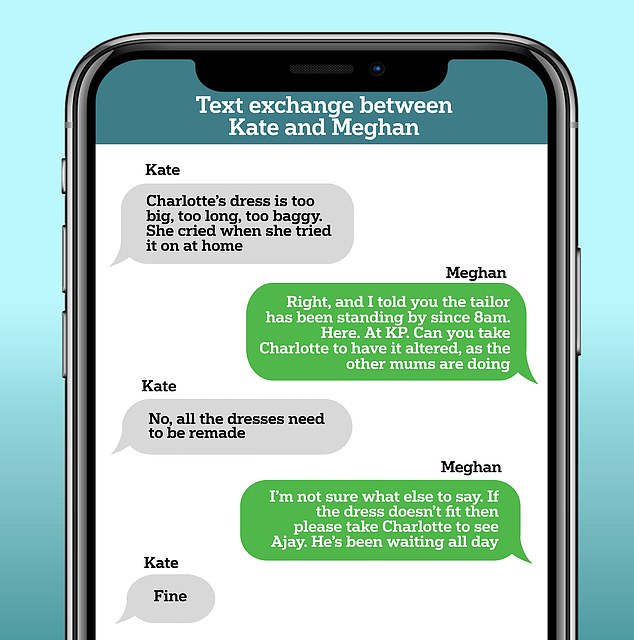 Kate and Meghan exchanged a series of texts (re-created, above) about the bridesmaid dress, according to Harry

Kate and Meghan ‘didn’t get on from the get-go’ 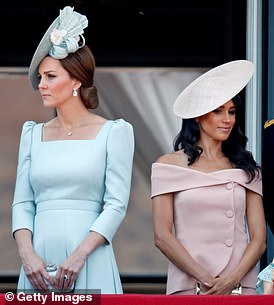 He also claims that his sister-in-law had ‘problems with the way Meg was planning her wedding. Something about a party for the page boys? It went back and forth’.

The prince reports his wife as saying: ‘I’m not sure what else to say. If the dress doesn’t fit then please take Charlotte to see Ajay. He’s been waiting all day.’

‘Fine’, Kate is said to have replied.

Harry states that he arrived home a short time later, which suggests that he and his ghost writer were given an account of the actual conversation by Meghan, to find his fiancée ‘on the floor sobbing’.

While he says he was ‘horrified’ to see her so upset, he didn’t think it a catastrophe as emotions were understandably high. He told Meghan that ‘Kate hadn’t meant any harm’.

He suggests his point was proved when the then Duchess of Cambridge came round the next morning with flowers and a card to say sorry.

There have been several different versions over the years of who made whom cry.

It was initially claimed that Meghan made Kate weep, a suggestion that so incensed the Sussexes they went to war with their press office and demanded they put out a correction.

When officials refused, saying it would spark more questions about the incident and set a precedent for speaking about private family matters, the couple decreed that it was another example of how the palace was unwilling to stand up for them. 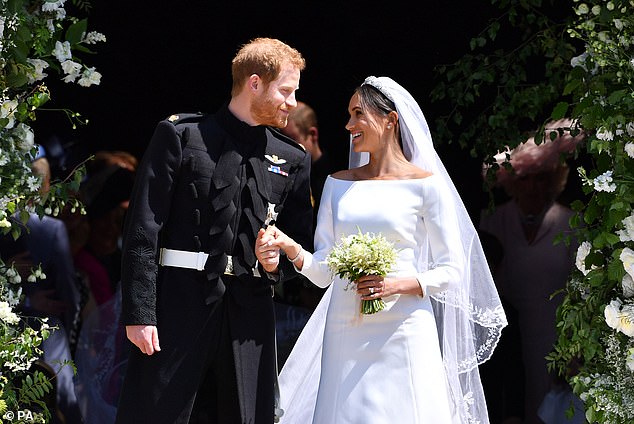 Bridesmaid dress-gate! How reports of Kate and Meghan arguing ahead of wedding unfolded

The bridesmaids, including Jessica Mulroney’s daughter Ivy and Princess Charlotte, have bare legs

November 2018 – The Telegraph’s royal editor Camilla Tominey wrote she had ‘spoken to two separate sources who claim Kate was left in tears following a bridesmaids dress fitting for Princess Charlotte’.

March 2021 – Meghan confirms there was a disagreement in her bombshell Oprah Winfrey interview but says the Duchess of Cambridge actually made her cry.

January 2023: Harry’s memoirs reveals new rifts between the Sussexes and the Wales’

Earlier this week, the Daily Mail’s Diary Editor Richard Eden claimed Prince Harry is ‘determined to trash the Princess of Wales’ poised reputation in his book.

During his ITV interview with Tom Bradby over the weekend, the Duke of Sussex, 38, recounted an awkward meeting that took place in summer 2018 in Kensington Palace between him, Meghan Markle and the Prince and Princess of Wales.

The father-of-two claims they had organised to meet in an attempt to clear the air following a series of disagreements, including Meghan commenting on Kate’s ‘baby brain’, which William labelled ‘rude’.

Later on, the Duke describes how Kate was gripping the edges of her leather chair so tightly that her ‘fingers turned white’.

The expert said: ‘What came across was Harry’s desire to change the image that we have of Catherine. We have this image of her being very poised, elegant, calm.

‘But no no, he was saying she was so angry that she was gripping the edge of the furniture so hard that her knuckles were going white.’

Prince William ‘recoiled’ from Meghan Markle’s hug and was ‘completely freaked out’ by sister-in-law during their first meeting, Prince Harry reveals

Royal family were ‘horrible’ to him on the day the Queen died, Harry claims in score-settling ITV interview

Harry suggests he and Meghan will NEVER give up their royal titles after Anderson Cooper asked why they don’t renounce them and live privately during explosive 60 Minutes interview: Prince blasts ‘what difference would that make?’