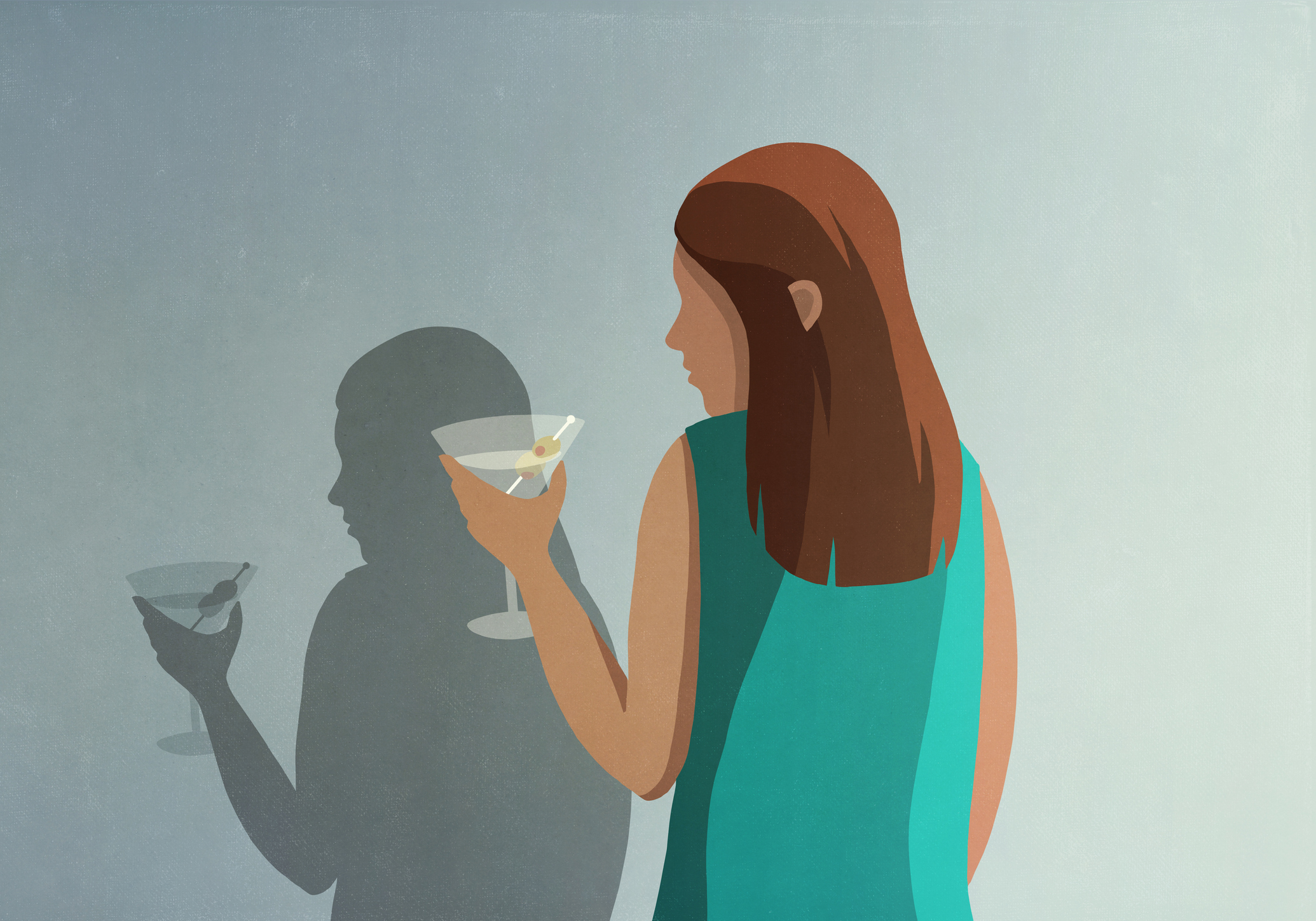 Sat in a local bar, holding a gin and tonic tentatively in one hand, I watch party-goers mill around during my friend’s birthday celebration.

I recognise the familiar tightening of my chest as I take a sip.

I’ve never liked drinking, but I often find myself at the bar to appease my friend group.

There tends to be a lot of questions — namely pregnancy-related questions — if I don’t join in and it’s easier to participate than to distance myself in today’s drinking culture.

I think of it as my ‘here we go’ moment where I know that I have to really compose myself internally and make sure I’m careful with what I’m drinking and how much I’m drinking. I feel like I have to put a lot more thought into how I conduct myself than others in the same situation.

The truth is that I’ve witnessed firsthand what alcohol can do to a person and how it can alter their personality to a point where you can no longer recognise them.

For me, it was a parent. I can’t remember when the addiction took hold but I know that it’s there in every memory I have of them. Nights of being babysat until early morning; my mother stumbling in and passing out on the floor while I’d be put to bed by my babysitter and told not to worry.

I learned at an early age to walk on eggshells when she drank, careful not to ignite a mood change or I knew I’d be consoling her when the tears inevitably started at the end of the night.

I remember pouring bottles of cider and vodka down the kitchen drain in a bid to stop her drinking, but it was only a mild hindrance.

My mother was never really able to be cross with me – she struggled a lot with discipline and was a very passive parent so her reaction was simple exasperation. She just went and replaced the alcohol after a few stern words.

If someone wants to drink, you’d better believe that they will find a way.

There were so many situations where I felt responsible for the safety and wellbeing of someone whose duty it was to protect me.

I have been in unimaginably dangerous positions, from being taken to a nightclub as a toddler in the dead of night, to being left at home for the night with the doors locked — having to climb out of a small window in the living room to be with family who could ensure my safety.

Ultimately, I was taken into care at the age of eight, after six years of being known to social services for a neglectful home life.

But the damage had been done, and I blamed alcohol for a long time.

As a teenager I joined a group of friends who regularly drank underage. I partook as I was desperate to be liked — but it was extreme drinking.

I didn’t know my limit or how to drink responsibly as I’d never had it modelled to me. I’d drink until the ground beneath me felt like it was moving and I’d spend the next few days in hiding, spiralling in shame as I analysed the night before to find some comparison to my parent and how they acted when under the influence.

As I grew older and was legally able to drink in bars, I limited myself to a couple of nights of drinking a month.

I have a rule: if I start spilling my drink, it’s time to go home

I stopped hanging around with the friends that I drank with. I used to make excuses as to why I couldn’t go out but it was usually because I didn’t have the mental capacity to go through another depressive episode after.

However, I would occasionally succumb, and after I would hide in my post-alcohol anxiety – because those couple of nights a month would always include excessive drinking – and this became a constant until I was 21.

It finally changed that year when I met my husband and I was finally held accountable for my drinking. I’d always struggled with the willpower to stop but as we moved in together, it was a lot easier when I had him to back up how I felt.

For as long as I can remember, I have always been warned not to follow in my parent’s footsteps by members of my family I stayed in contact with. Those words would confuse and anger me. Why would I be like them? I was living in that house, dealing with it firsthand. I knew how bad it was.

I never understood why I was cautioned, as it was obvious to me even from an early age that what was happening wasn’t normal and it was damaging to the lives of everyone close to my mother.

Many times, I’ve tried to cut out alcohol completely, for the fear of addiction being a hereditary trait. But I have a strong desire to prove that it’s possible to come out of this with the ability to drink within reason, if only to prove it to myself and to those who compared me to my mother when I was only a child. I cut contact with them all, but the thought still satisfies me.

And becoming a mother has opened up a host of old and new wounds.

On one hand, I try to sympathise with my own: with how hard it must have been to parent with your husband working away so much, living in another country away from immediate family.

But on the other hand, I refuse to allow the circumstances to be an excuse for my childhood and constant mental struggles that many people my age have never experienced and could never understand.

I’ve been in therapy intermittently from a very young age, trying to understand the difference between responsible alcohol consumption and alcoholism. My own self-criticisms – like if I felt I’d made a wrong choice or said something embarrassing – have enabled me to see where I can change for the better, which allowed me to take a step back from drinking and question whether it’s going too far. I have a rule: if I start spilling my drink, it’s time to go home.

I have accepted that I will always have a strained relationship with alcohol, but I hope that one day I can drink a simple glass of wine without wondering whether I’m following in my mother’s footsteps.

Looking back at the birthday party, where I sat with gin and tonic in hand, I left two hours in after one drink as it was starting to get messy and by that I mean, drunken arguments were happening with partygoers.

I came home to my family and enjoyed a quiet night to myself without even a shred of regret or guilt and I knew I wouldn’t change a thing.