When the container ship Ever Given blocked the Suez Canal for six days earlier this year, its impact rippled through the global economy.

Almost 370 ships carrying more than $10 billion worth of goods stood idle, waiting for one of the world’s most important trading routes to clear. 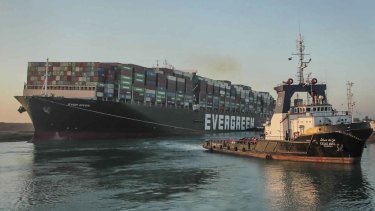 The Ever Given caused global shipping chaos when it got stuck in the Suez Canal. It’s impact on inflation is still being felt.Credit:Suez Canal Authority via AP

Seven months on, the Suez is clear but the issues highlighted by the Ever Given continue to ripple around the global economy. At 11.30am on Wednesday, some of those ripples hit the shores of Australia with underlying inflation reaching a six-year high of 2.1 per cent.

The Reserve Bank watches underlying inflation closely because it excludes one-off factors that might drive up (or drive down) consumer prices.

The 0.7 per cent quarterly increase came as a major surprise. Markets responded by pushing up the Australian dollar to well beyond US75c while bond rates also moved sharply on anticipation that inflation is back.

The figures have intensified a fight growing in monetary policy circles – whether the world is seeing a transitory lift in inflation, attributable to one-off events like the Ever Given, or a sustained inflationary pulse that will soon require a lift in official interest rates.

At stake is the future facing millions of mortgage holders, hundreds of thousands of businesses and the people they employ.

If the lift in prices was transitory, the RBA can argue the case that given a little more time, pressures will abate. The world’s manufacturers will catch up with demand, shipping companies will get their products out of the containers and onto the shelves of retailers, and workers will return to their employers.

These are all key parts to the team transitory. Once the economy returns to “normal”, inflation will calm down.

The figures released by the ABS can support the transitory view. Run-away house building costs will edge down as demand slips, people will run out of things to put in their home offices and OPEC members will increase production enough to stop further increases in petrol prices.

But the same figures give succour to team sustained. These are the people (many of whom are investors pricing in interest rate rises from the middle of next year) who reckon inflation is here to stay.

Record low interest rates will only encourage more housing construction, especially once migrants start to return to Australia and find they need a place to live.

As almost every nation in the world has found, businesses will have to start paying people more to get them back to work. Higher wage growth is the Reserve Bank’s stated aim, a reason why it has such low interest rates.

People, and businesses, have saved so much money over the past 18 months that as it is spent it will keep inflation higher rather than lower. The supply chain issues that have your Christmas presents stuck on a wharf in Sydney or Melbourne aren’t going to be resolved any time soon.

The RBA’s stated position is clear. The bank “will not increase the cash rate until actual inflation is sustainably within the 2 to 3 per cent target range. The central scenario for the economy is that this condition will not be met before 2024”.

But financial markets have the bank increasing rates by the middle of next year – maybe just after the federal election.

The last time the cash rate was increased, Julia Gillard was Prime Minister, Taylor Swift had an album at number one on the charts (Speak Now), and Collingwood had (finally) won another AFL flag.

It seems a lifetime ago, just like the Ever Given.