Johnny Depp’s defamation case against his ex-wife Amber Heard is still ongoing in a Virginia court, but on TikTok the verdict has already been handed down.

Over the course of the past three weeks, footage of the lawyers’ arguments and Depp’s testimony has been edited into short clips on the video platform, sound-tracked with popular music and computer-generated voices, and littered with various emojis. Some of the most common: clown, facepalm and poo. 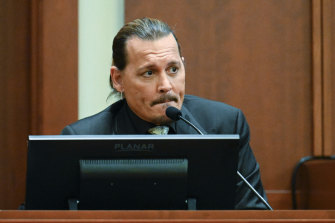 Actor Johnny Depp testifies during a hearing at the Fairfax County Circuit Court in Fairfax, Virginia.Credit:AP

It might not be the first time this has happened, but the scale of it makes it almost definitely the most TikTok’d trial in history.

Videos under the hashtag #JusticeForJohnnyDepp have clocked up a collective 5.5 billion views and counting. If the hashtag was a movie, it would have sold out 27 million theatres, making it roughly 869 times more successful than the opening weekend of Depp’s final Fantastic Beasts film.

On the other hand, those advocating #JusticeForAmberHeard have views totalling less than half of one percent of the #JusticeForJohnnyDepp figure.

A screenshot of one of many TikToks mocking a lawyer cross-examining Johnny Depp.

Despite the damage Depp’s reputation has sustained in the past few years (or perhaps partly because of it), young fans of the actor are adamantly proclaiming his innocence against Heard’s allegations of domestic abuse – and finding creative ways to do so.

Some of the most popular videos poke fun at the perceived gaffes of the lawyers cross-examining Depp. Others focus on Amber Heard (or “Amber Turd” as she’s been nicknamed), labelling her a liar and an abuser after Depp made his own allegations of domestic violence in court.

In one clip, a young woman whose bio says she’s 17, is pictured next to an image of Heard. She lip-syncs the words, “I don’t exactly hate you, but if you were on fire and I had water I’d drink it.”

Most of the comments are just as brutal. One user responds: “I simply despise her”.

Another writes, “SHE USE (sic) TO HAVE THE LIFE WE ALL WANTED TO HAVE. MARRIED TO JOHNNY DEPP AND UNHAPPY?? GURL PLS.” 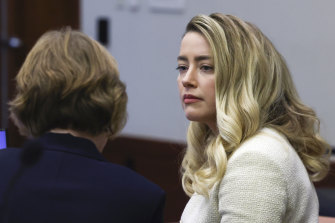 Actor Amber Heard speaks to her attorney.Credit:Evelyn Hockstein/Pool via AP

Paul Thaler, a professor of communications who has written two books on the effect of televised trials on the American justice system, isn’t surprised about the scale of the engagement.

“This trial has all the elements of a terrific movie,” he says. “It has the two stars. And it has their accusations flying back and forth in this sensational nature.

“It is [being seen as] a piece of entertainment.”

This is a trend he saw hit the mainstream with the OJ Simpson trial in the ’90s and then escalate with the emergence of streaming and social media. All televised trials have become entertainment of some kind, but when a celebrity is involved in this way, it can create a much more frenzied environment.

And this environment can be even more intense on a platform like TikTok, where videos are produced rapidly and distributed directly to those who are algorithmically most likely to enjoy them.

“Fans are having fun with it,” Thaler says. “They’re creating their own scripts, so to speak; taking bits and pieces of footage and weaving it together to form their own devotional videos.”

“This is a made-for-TikTok event … But it’s also the lives of two people. And they’ve got some serious issues.”

Kim, a 29-year-old Australian TikTok creator who primarily focuses on true crime, says she doesn’t care about celebrity drama. She started making videos supporting Depp because she believes he is a victim of domestic violence. 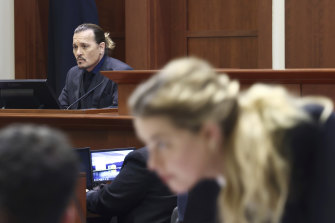 Amber Heard speaks with her legal team as actor Johnny Depp returns to the stand.Credit:Jim Lo Scalzo/Pool Photo via AP

“Most of the time men are the abusers,” she says. “But I think this is a good turning point to show that it’s not always that way.”

According to the Australian Bureau of Statistics 2016 Personal Safety Survey, one in six Australian women have experienced physical or sexual violence by a current or former cohabiting partner, compared to one in 16 men.

Kim hasn’t posted videos targeting Heard, however she does admit that her personal feelings about Depp make it hard to be unbiased – and the reinforcing nature of the TikTok algorithm means her feed is full of videos from people who feel the same way.

Justice is a tricky thing to work out in this trial, however – and trickier still when distilled through the lens of TikTok. 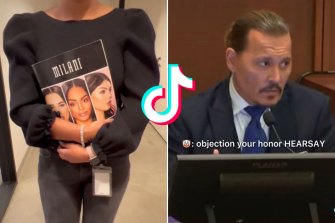 Johnny Depp and Amber Heard’s courtroom hasn’t just been playing out in a courtoom, it’s also taken over TikTok.

This isn’t a criminal trial to charge either Johnny Depp or Amber Heard with assault; this is a civil suit about a defamation claim. After losing a 2020 libel action against The Sun for a story which described him as a “wife beater”, Depp is now suing his ex-wife over an op-ed she wrote in The Washington Post which, he claims, infers he was abusive.

It’s in both parties’ interests to paint the other as the aggressor in their marriage and, because of this, it’s descended into what this masthead’s correspondent has called a “toxic soap opera”.

While social media has been a powerful force for victim-survivors to tell their stories and feel supported in the #MeToo era, it can be an especially problematic tool, Thaler points out that, during ongoing trials. It’s dangerous, he says, to come to conclusions from the content you see on TikTok – or even the evening news.

“What you see in the media is not the same thing [people] see in the courtroom,” he says.

“The media selects small pieces of a trial – even if they’re not the most important pieces – and highlights them. The most dramatic bits play well on television. And that’s what’s happening now on social media.”

One example, he cites, is the “inconsequential” jokes and facial expressions Depp has been making in the courtroom when others are speaking.

“I would imagine an actor like Johnny Depp, who clearly [knows] his craft, understands how he’s playing to his fans outside of the courtroom,” Thaler says.

But it’s not just the Depp stan accounts making viral content from these isolated moments.

At one point US beauty brand Milani Cosmetics also got in on the action, posting a skit of a staff member investigating and debunking a claim heard in court about Heard using a colour-correcting palette to conceal bruises.

The TikTok, soundtracked by a song about being an “international superspy” from a Nickelodeon cartoon called The Backyardigans, revealed that what appeared to be the Milani product Heard’s lawyer held up in court didn’t exist at the time in question.

This clip has been viewed more than 5 million times, skyrocketing the company’s engagement and search traffic, and has been widely reshared on #JusticeForJohnnyDepp as evidence of Heard lying. BuzzFeed News reports that one of Depp’s public relations reps has also been sending the TikTok to journalists.

The trouble is, Heard’s lawyer never actually named Milani in court. Though the palette she showed looks very similar to the one in the TikTok, it’s just as possible she was using it as an example of the type of make-up Heard used during her marriage more than six years ago.

Most TikTok users who see this video probably won’t know any of that context. They might not be engaging with the trial at all. But, after just 20 seconds, they’ll almost definitely come away with the view that Amber Heard is lying. And then, after they’ve watched that video, TikTok will fill their feed with a bunch more reaffirming that belief.

It might seem strange that a faceless intern at a make-up brand could have that effect. Or that a brand is commenting on a libel trial concerning domestic violence in the first place. But it’s somehow where we’ve ended up.

“The courtroom has expanded beyond the parameters of a building,” Thaler says.

“The floodgates are open.”

Support is available from the National Sexual Assault, Domestic and Family Violence Counselling Service at 1800 RESPECT (1800 737 732).