James Merlino has been spending more time at home lately, tending his garden, making olive oil from his backyard grove, and getting to know the alpacas, chickens and guinea pigs that his family has acquired since making their recent move to a big country block in the Dandenong Ranges.

This leafy idyll on Melbourne’s eastern fringe is his happy place, but Victoria’s deputy premier insists he isn’t getting too comfortable, despite the stability that comes with spending almost two terms in the education portfolio. 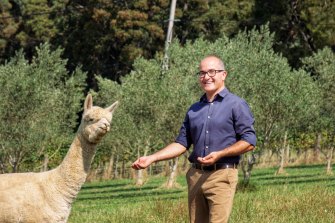 James Merlino feeds one of his alpacas on his family’s new property on Melbourne’s eastern fringe. Credit:Luis Enrique Ascui

Nor, say critics, can he afford to, even though he oversees a school system with the country’s best NAPLAN results.

Those results paper over a troubling lag that has emerged in the pace of learning progress in the pandemic, while two terms in government has not been time enough to overcome the historic underfunding of Victoria’s public schools.

Others praise him for staring down ideological attacks and pursuing reforms that will set students up for life.

Merlino has been education minister for 7½ years, one of just a handful of Andrews government ministers who have remained in the same portfolio since 2014, and long enough to have made a mark on Victoria’s school system.

It’s the job he set for himself on the day he arrived in Parliament 20 years ago. As an arts student at university, he even contemplated becoming a teacher before choosing the “riskiest path” of politics, he says.

“It’s always been a real passion of mine and a key public policy area for a Labor government. ”

Merlino is a devout Catholic, whose adherence to Catholic doctrine has put him at odds with many of his Labor colleagues during conscience votes on decriminalising abortion and voluntary assisted dying.

Yet many of his fiercest fights have been against religious groups seeking to influence what is – or is not – taught in Victorian schools.

”That was a really important move and for him, coming from a very strong Catholic background, it was a brave move for him to take.”

Merlino also stood his ground when the anti-bullying Safe Schools program for same-sex attracted and LGBTI+ students faced a backlash from some faith groups and the conservative side of politics. 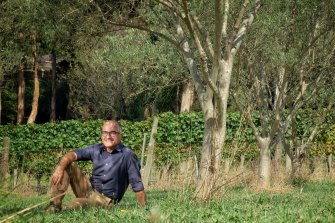 James Merlino has spent almost eight years in the education portfolio, longer than any other current minister.Credit:Luis Enrique Ascui

Victorian Human Rights and Equal Opportunity Commissioner Ro Allen, who helped the education department to deliver the program, said Merlino was under “intense and sustained pressure” over Safe Schools.

“For James, though this wasn’t about making decisions based on ideology or populism – he interrogated the available evidence and used that to first form his decision and then stick to it,” Allen says.

”That can be a rare thing in politics, and I admire the stand he took and the decision he made.“

But standing his ground hasn’t always paid dividends for Merlino.

Victorian state schools remain the lowest-funded in Australia, with no prospect of achieving full funding by decade’s end under current projections.

In the 2019 federal election campaign, Merlino quit negotiations with the Commonwealth over a new 10-year funding agreement for Victorian schools, banking instead on a Bill Shorten win.

When Prime Minister Scott Morrison defied the polls, Merlino had no option but to sign an agreement he had pilloried as a “dud multi-year deal for schoolkids”.

Analysis by Trevor Cobbold, a former economist with the Productivity Commission and a relentless advocate on government school funding as convenor of lobby group Save Our Schools,

found that the 10-year deal signed between the Morrison and Andrews governments will short-change Victorian government schools by $19.5 billion.

“The minister has had eight years to correct the chronic under-funding of Victoria’s public schools but has failed to do so,” he says.

“Victorian government funding per student, adjusted for inflation, is still significantly below the level in 2009-10. Public schools will face a funding crisis over the rest of the decade unless there is a dramatic change of policy by the Andrews government.”

Labor has been doing a bigger catch-up job than any other jurisdiction.

Productivity Commission figures reveal that, since coming to power in 2014, Labor has increased its year-on-year spend in government schools by 30.1 per cent, well above any other jurisdiction. Per student, the increase is 16.4 per cent.

When NAPLAN results were published in December they were remarkable for what they did not show. Two years of interrupted schooling and lost class-time had no measurable negative effect in the headline data.

Victorian students led the way in 13 of 20 NAPLAN measures, prompting Merlino to celebrate that “our investment in the Education State is paying off”.

But critics say a closer look at the data suggests there is less to celebrate. A comparison of 2021 results with 2019 revealed that learning progress was below the national average for students moving from year 3 to year 5, years 5 to 7 and years 7 to 9 in most measures.

Ben Jensen, chief executive of research group Learning First and a former director of the Grattan Institute’s school education program, says Victoria’s sluggish progress on NAPLAN has less to do with the pandemic than an in-built aversion to reform.

He argues Merlino has been a disappointing education minister who has failed to act on the best evidence both interstate and overseas.

This has become most apparent in the teaching of reading, Jensen says, where Victoria persists with a balanced literacy approach that combines storytelling and phonics, which most other states have jettisoned in favour of explicit teaching.

Jennifer Buckingham, a phonics advocate and director of strategy at literacy instruction company MultiLit, said Victoria’s reform failure on phonics had engendered the strange situation where a growing number of schools, including government schools, are looking outside the state for evidence-based advice on teaching children to read.

Professor Jim Watterston, dean of the University of Melbourne’s Melbourne Graduate School of Education and a former departmental education executive in Victoria, Queensland and the ACT, said Merlino had built Victoria’s education system into the best in Australia.

Watterston cites the introduction of government funding for three-year-old kindergarten as a reform that has gone mostly under the radar but will change lives for the better.

“Three-year-old early childhood education is the biggest game-changer in Australian education in the last 20 to 30 years. It will take 15 to 20 years, but it will be the biggest influence on school improvement that we will have in decades and Victoria went alone on that.”

Victorian Education Minister James Merlino is a speaker at The Age Schools Summit on Wednesday.