The review of the Reserve Bank is not being driven by the squeals of over-extended home buyers who decided to throw everything but a spare kidney at getting into the property market over the past two years. 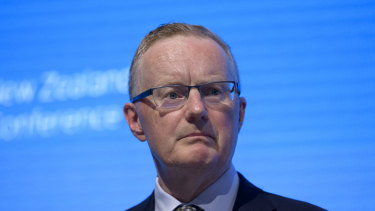 Reserve Bank governor Philip Lowe says a review of the institution will be a “health check”. But it will be much more than that.Credit:Rhett Wyman

But if you genuinely thought an official cash rate of 0.1 per cent was the new norm, then there’s a bridge over Sydney Harbour up for sale.

When Lowe made his comments, there was already early evidence of inflationary pressures. There were some economists, and plenty of people in financial markets, who thought the RBA (along with other central banks) would have to start tightening monetary policy.

None of them, however, had incorporated lockdowns across China that would feed into a shortage of everything from shipping containers to semiconductors into their inflation forecasts. None predicted Putin would roll tanks into Ukraine, driving up oil and wheat prices. None in Australia were expecting $11 lettuces due to a string of La Nina-driven floods.

The Reserve Bank is thought by some as a bunch of high priests beyond reproach, but even a deity would have struggled to put all those events together (along with overly supportive fiscal policy) and come up with inflation running north of 6 per cent.

No, the RBA review can be drawn from where the bank had interest rates ahead of the pandemic.

For those with short memories, it was in late 2018 the bank was saying the next move in interest rates would be up.

But on May 21, just three days after the 2019 federal election, Lowe gave a speech in which he said at the RBA’s next meeting “we will consider the case for lower interest rates”.

Unemployment was above 5 per cent, underlying inflation hadn’t been near the mid-point of the RBA’s target range for years while the last time wages growth had a 3 in front of it, Julia Gillard was prime minister.

Research by Monash University economist Zac Gross and Labor frontbencher (and trained economist) Andrew Leigh this year suggested the RBA had kept interest rates too high between 2016 and 2019. The cost of that miscalculation was about 270,000 jobs.

Keeping rates too high for too long meant more people out of work, inflation below the bank’s target and downward pressure on wages growth. That’s a terrible trifecta.

That’s why the pressure for a review of the Reserve Bank was gathering steam through 2021, well before today when interest rates are heading up to choke off the demand pressures underpinning much of the country’s inflation problem.

Jim Chalmers’ review, the first outside examination of the RBA since the days of Bankcard and $1 notes, is sufficiently broad to canvass a backlog of issues that have grown over the years.

The fact the 2-3 per cent inflation target is part of the review is a positive. To ignore the target, the bank’s guiding light, would seem more than passing strange especially as other central banks have used their reviews to look at their own targets.

A board structure, that can be dated back to when Ted Theodore was treasurer during the Great Depression, and a mandate formalised when Elvis was still in the army, all need a fresh and outside examination.

Lowe described the review as a “health check”. It’s more like a mechanic stripping down an EJ Holden, hoping to rebuild it as an EV Jaguar.