The Therapeutic Goods Administration, the country’s medical regulator, has provisionally approved the Pfizer COVID-19 vaccine for use in Australia.

Prime Minister Scott Morrison said the green light was a formal approval under the normal processes of the TGA and not an emergency measure, but warned that the crisis was far from over. 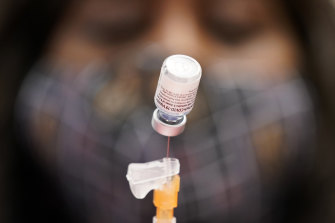 A certified medical assistant prepares a dose of the Pfizer-BioNTech COVID-19 vaccine at a vaccination.Credit:AP

“I have a simple message to Australia, thank you Australia,” he said. “Thank you that you have put us in a situation that is the envy of most countries in the world today. We intend to keep it that way. We intend to remain vigilant.

“Once the vaccines start, that doesn’t mean you can jump on a plane to Bali the next day, that the masks or the quarantine arrangements disappear … this will build, it will start at a small scale but it is not a silver bullet.”

The provisional approval is for individuals over 16 years of age, with two doses required at least 21 days apart. It is a temporary approval to meet public need, where the benefits of early approval outweigh the risks.

For the very frail – people aged over 85 – the TGA recommends doctors and nurses vaccinate on a “case-by-case basis”, as the potential benefits of the vaccine must be weighed against the risks of exposing a very frail person to the vaccine’s standard flu-like side-effects.

About 80,000 doses will be administered every week from late February and the rate will increase once the doses of AstraZeneca’s vaccine to be manufactured in Australia – which will peak at 1 million doses a week – can be distributed. The rollout is expected to be completed in October.

“Around August last year we took the decision that we didn’t want to be in a situation where we were completely reliant on the production of vaccines overseas,” Mr Morrison said. “We put the arrangements in place to ensure we would be able to produce our own vaccine here in Australia and that is happening now.”

He said Australia “paid a premium” for the capabilities and that the federal government was involved more broadly in the development of vaccine production facilities in Melbourne.

“That was the right decision for Australia because, as much as you can, you want to be able to control as many things as you can in this country when dealing with COVID-19.”

Mr Morrison said the logistical challenge of distributing the vaccine in a country as large as Australia would be significant.

“There will be swings and roundabouts in the process,” he said. “You can also expect for us to explain those as they occur.”

Foreign Affairs Minister Marise Payne has started working with Australia’s Pacific island neighbours on preparations to administer the COVID-19 vaccine in the region.

“I have had some fantastic messages back from Pacific leaders over the course of the last week,” Mr Morrison said. “They are appreciative of the proactive role that Australia has taken to ensure that they will be in a position to administer that vaccine.”

Health Minister Greg Hunt said the world-class regulators at the TGA had been working tirelessly to introduce a safe and effective COVID-19 vaccine in Australia.

“The TGA’s processes are, I believe, the best in the world and we have ensured that they are thorough,” Mr Hunt said. “The TGA has placed safety above all else.”

The head of the TGA, Adjunct Professor John Skerritt, thanked the clinical and medical officers, scientists, pharmacists and experts in statistics, laboratory analysis and manufacturing assessment who “have worked tirelessly” on assessing the vaccine.

The vaccine was approved after a phase 3 trial, in which 43,651 people aged over 16 were enrolled.

Of the 36,523 people eligible for the interim analysis, there were 170 confirmed cases of COVID-19 – 162 of them in people given the placebo.

These large numbers allow scientists to be confident in their findings. The TGA’s analyses puts the vaccine’s effectiveness at preventing symptomatic COVID-19 at 95 per cent – or, to put that another way, there is a 97.5 per cent chance the vaccine’s efficacy is at least 90.3 per cent.

However, there are many unknowns – this is a provisional approval, rather than full registration.

It remains unclear if the vaccine will have any effect on reducing the transmission of the virus. It also remains unclear what effect the vaccine has on asymptomatic COVID-19, as people in the trial were only tested for COVID-19 if they had symptoms.

It also remains unclear just how long the vaccine will be effective. In monkeys, declining antibody and immune-cell levels over five weeks were noted.

Doctors will also need to decide whether to inoculate pregnant women, people with autoimmune disorders and those with compromised immune systems, as the TGA said there is limited human data to guide advice.

The vaccine comes with minor but common side-effects, the TGA’s release documentation says.

Most of these effects dissipate a few days after vaccination. Young people seem slightly more likely to have side-effects than the elderly.

Importantly, scientists say these side-effects are evidence the vaccine is working, generating a powerful immune response to an invader, just like a cold or the flu.

Two people in Britain suffered anaphylactic shock after the vaccine; both had a history of severe allergic reactions, and both have since recovered.

Data from the vaccine rollout suggests about 11.1 people in every million given the vaccine will experience anaphylaxis. In light of that, the TGA is asking doctors to closely watch people for at least 15 minutes after injection.

So far, the vaccine trials have tracked participants for only two months. However, the TGA’s vaccine experts believe nearly all serious vaccine side-effects should show up after four weeks, so they are confident the vaccine has an acceptable level of safety.

Before the vaccine is released to health professionals, it will undergo batch testing at the TGA’s laboratories to check quality control.

Get our Coronavirus Update newsletter for the day’s crucial developments and the numbers you need to know. Sign up to The Sydney Morning Herald’s newsletter here and The Age’s here.