Selling one of Britain’s most expensive homes? Try fitting a shark tank, a fridge just for furs – or an indoor waterfall!

The interior designer Dara Huang is used to dealing with requests for ‘wow moments’.

For most of us that might be a nice feature wall, a copper worktop or — if you are pushing the boat out — a home sauna. Dara’s clients have rather higher expectations.

‘They expect to have the best of the best, so you really need to answer that with bespoke solutions,’ she says. 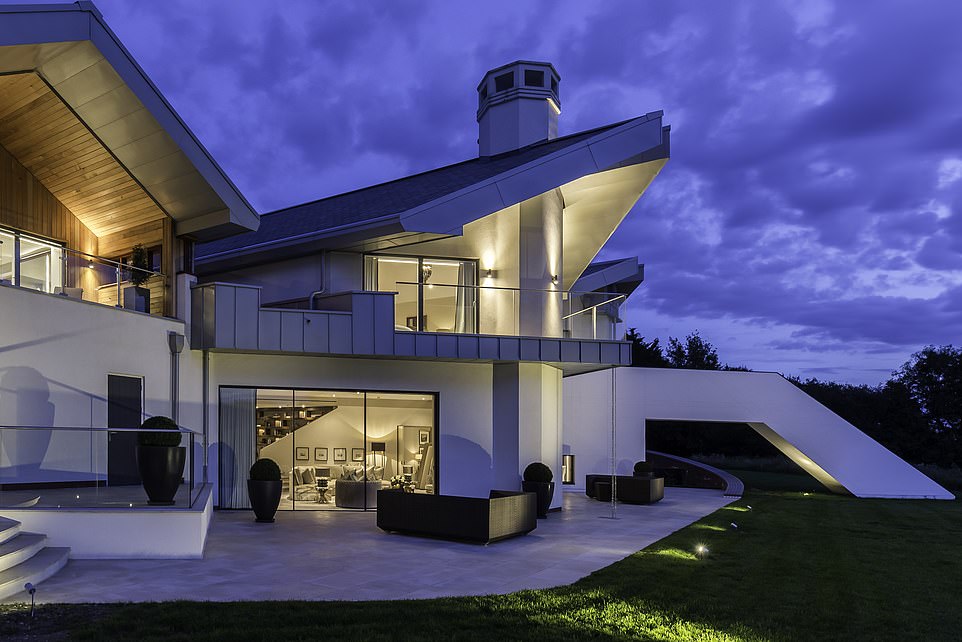 HARFORD MANOR £30M: Set in 40 acres of prime polo territory just outside Windsor, the nine-bedroom home has a gym, swimming pool and stables. 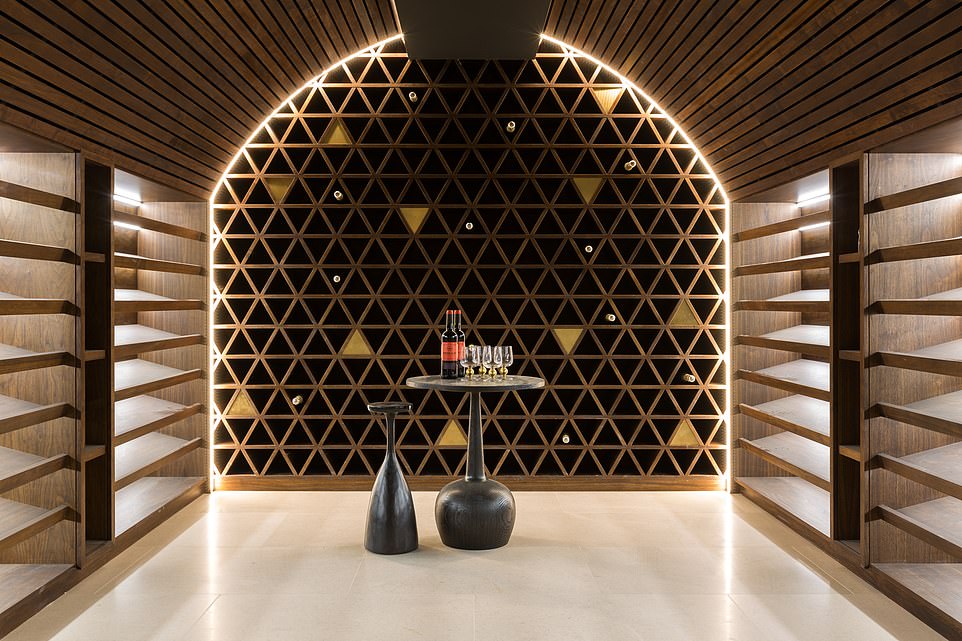 A wine cellar in Harford Manor, a prestigious property where the main bedroom suite boasts three separate bathrooms as well as 16 wardrobes

Dream maker: Interior designer Dara Huang, 38, said her clients expect ‘the best of the best’. She added: ‘You really need to answer that with bespoke solutions’

That means designer entertainment bars, clear-glass garages and waterfalls — lots of demand for the latter, apparently — as a starter for ten.

‘It can go anywhere from something as simple as a home theatre to as extravagant as baby shark tanks,’ says Dara, formerly the partner of Princess Beatrice’s husband Edoardo Mapelli Mozzi and mother to his five-year-old son Wolfie.

We meet Dara, 38, in the first episode of Britain’s Most Expensive Houses, a feast-for-the-eyes Channel 4 series which goes behind the scenes of high-end estate agent Sotheby’s International Realty. 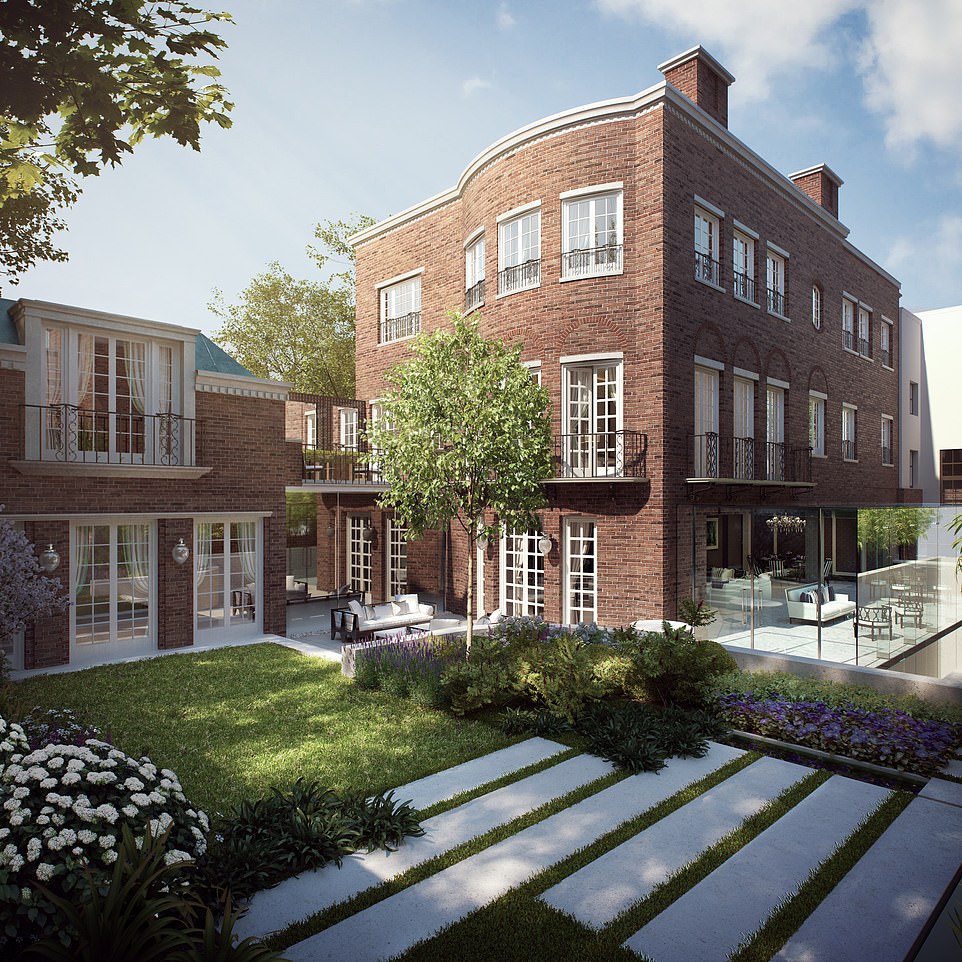 AMBERWOOD HOUSE £75M: A 15,300sqft mansion spread over five floors in Knightsbridge, central London, that until 1991 was the Panamanian Embassy. The biggest of the five en-suite bedrooms takes up an entire floor A pool with a a series of mirrors and a chandelier at Amberwood House. The house was for many years the home of ballerina Margot Fonteyn

Unless you count Dara being asked to design a bespoke ‘S&M room’ for one of her clients, that is.

‘But you know, we’re very professional about it: we don’t flinch,’ she says. ‘We just do whatever it is they want.’

‘They’ being the ultra-high net-worth individuals driving a booming ‘super-prime’ property market in the UK.

In the past year London had the highest number of luxury home purchases of any city in the world, a £2.7 billion market.

And demand for the capital’s mansions and penthouse pads has been matched by an equally feverish desire for countryside castles and stately homes.

‘This year has been spectacular,’ Guy Bradshaw, managing director of Sotheby’s International, tells the Mail. ‘We’ve sold a number of properties between £10 million and £15 million in the past few months.’ 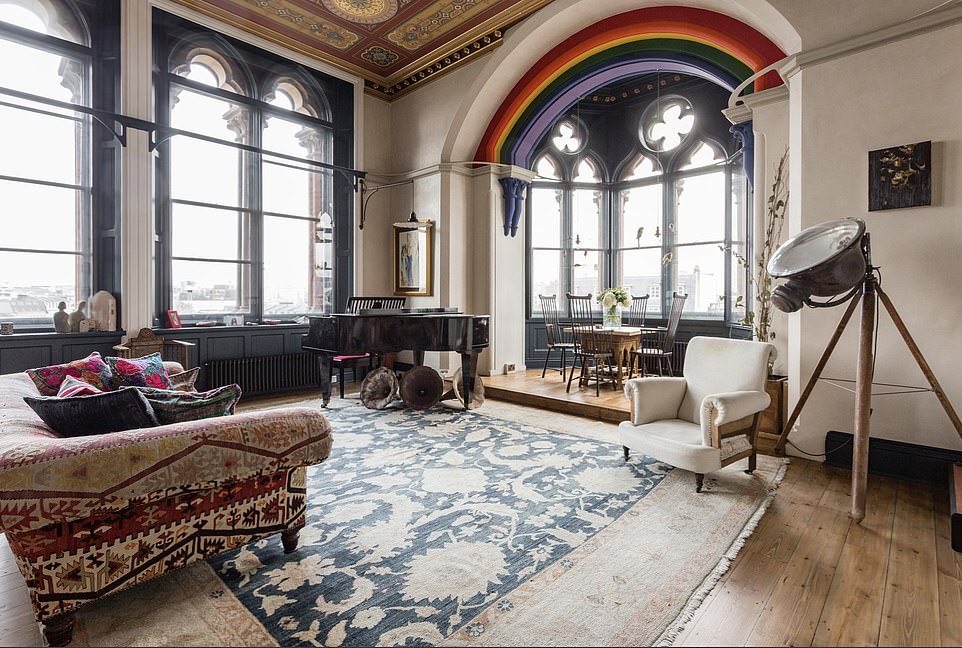 ST PANCRAS CHAMBER £4.6M: A penthouse located on the second floor of the clock tower of one of the capital’s most iconic buildings. Spanning 1,600sqft with triple-height windows, the interiors — personally customised by the owner, model Lily Cole — include a painted rainbow over one of the distinctive Gothic window arches.

Contacts are everything when it comes to finding new clients, with Guy saying the agents rely on their ‘little black books’.

‘I get a lot of referral business from previous clients,’ she says. ‘My Instagram generates business too.’

A hefty deal also means a hefty slice of commission. In the UK market, agent’s fees are between 8 and 10 per cent of rental and 1 and 4 per cent of sale price. While a chunk of that goes to Sotheby’s, a decent slice goes to whoever got the customer to sign on the dotted line. 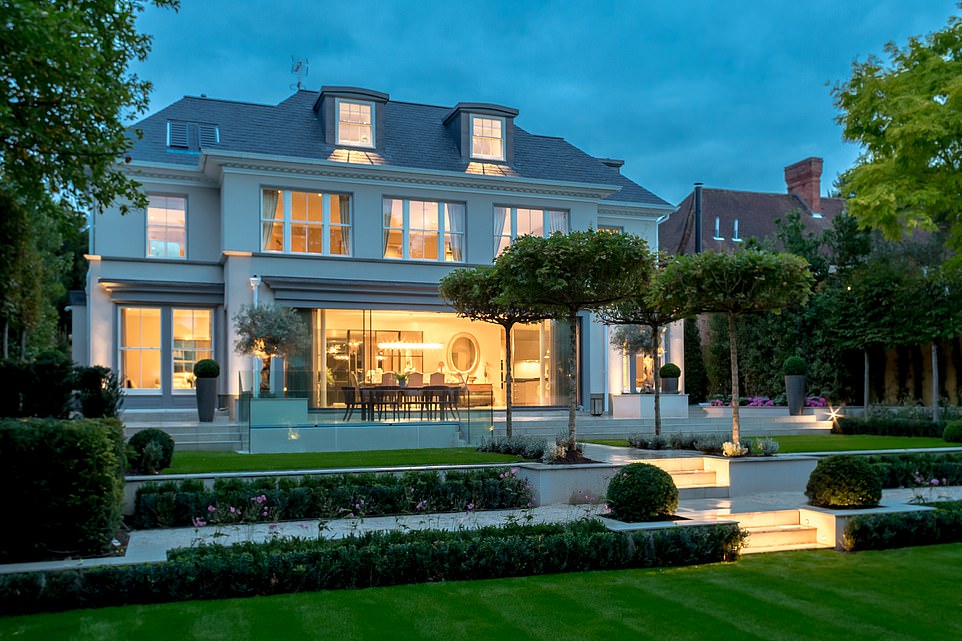 LANGDALE HOUSE £10.25M: A new-build six-bedroom, five-bathroom mansion near Roehampton, South-West London, that includes a wine cellar with space for some 1,000 bottles, a games room with jukebox and projector screen, and basement flat for staff or family

So you can imagine how keen Diana, 36, is to secure a sale on Amberwood House, a vast mega-mansion in Knightsbridge, central London, that until 1991 was the Panamanian Embassy, and for many years the home of ballerina Margot Fonteyn.

It was purchased four years ago by property developer Kam Babaee, who has spent £28 million transforming it into a 15,300 sq ft mega-mansion spread over five floors, complete with a triple basement and a cantilevered staircase.

‘It would be a lovely payday, but also securing a sale at that level would be something to be proud of,’ says Diana. ‘It’d be like winning a Bafta.’

Shereen Malik-Akhtar, 32, started as an office manager at Sotheby’s eight years ago and has worked her way up to lead the central London sales team. She is thrilled to have snaffled the sale of a £12 million penthouse in Southbank Tower, an iconic development on the bank of the Thames.

It’s not even completed yet — for that you get ‘shell and core’, meaning a 4,400 sq ft blank canvas, albeit one with 40 ft-high floor-to-ceiling windows framing epic views.

The young Scots entrepreneur who has snapped it up was sold on Dara Huang’s interior design vision for the ‘ultimate bachelor pad’, including a vast interior dining space and roof terrace with a glowing onyx entertainment bar, and dual ‘cool and Jacuzzi’ pools.

Another penthouse purchaser in the same building requested a shark tank. ‘Nothing fazes you in this job,’ says Shereen.

‘For female clients it’s often about clothes and shoes. I’ve been asked about a fur fridge, which is a room set to a controlled temperature to keep your furs in pristine condition, and a make-up fridge. This job opens your eyes to another world.’

On the Llyn Peninsula, North Wales, we also get to goggle at Plas Glynllifon, a 110,000 sq ft, 102-room Neoclassical Grade I-listed mansion with its own Batman-style cave in place of a garage.

It costs a mere £2 million but it needs around £20 million spent on it to restore it to its former glory.

‘Clients have serious amounts of money and you’ve also got to be ready for the long game,’ says Guy, who is trying to find the right property for someone who wants garaging for more than 50 cars.

‘Someone might come to you with £50 million to spend but they’re not going to spend that in two weeks. It could take a year, or many years. You have to build a relationship.’

And even then, there are no guarantees, as broker Mary Robertson can testify. She has nurtured a four-and-a-half-year-long relationship with a French Moroccan millionaire developer and socialite based in Dubai, and is convinced that he is the perfect match for Harford Manor, a £30 million property set in 40 acres of prime polo territory just outside Windsor. 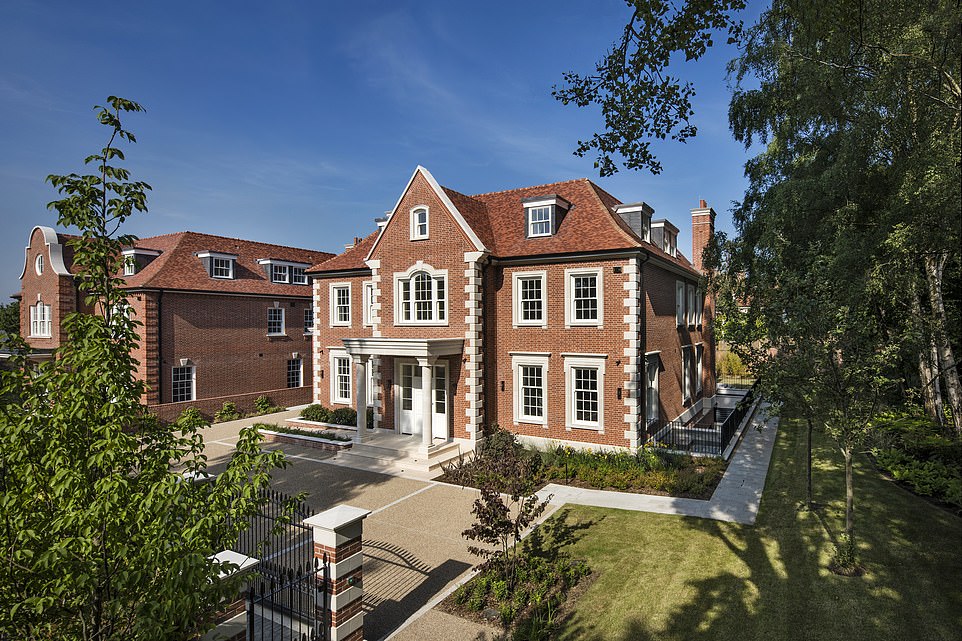 HUXLEY HOUSE £17M: In the Bishops Avenue in Highgate, North London, regularly listed as one of the most expensive streets in the UK, this is a sprawling 14,500sqft abode featuring eight bedrooms and nine bathrooms 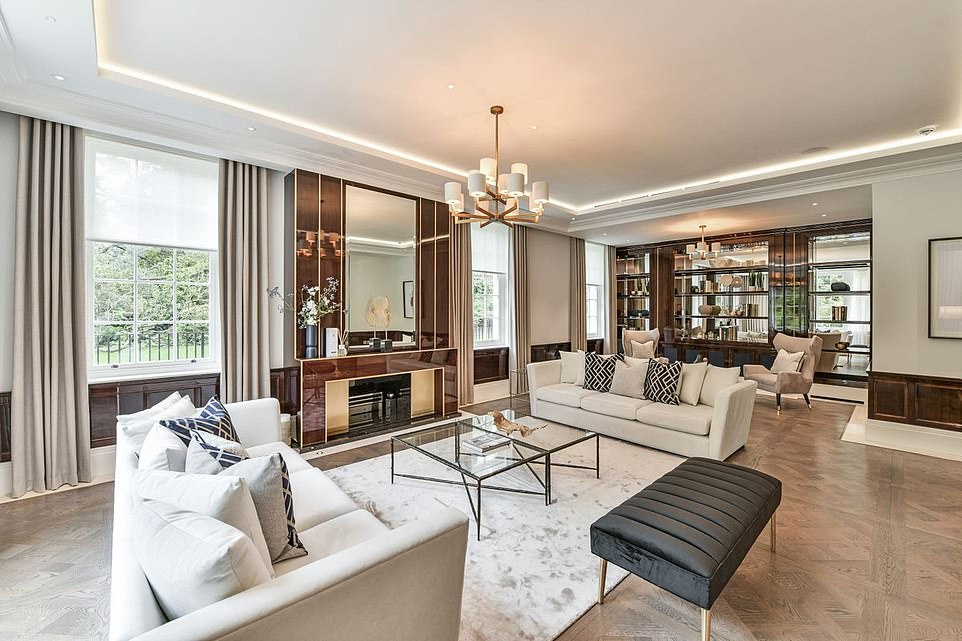 A gorgeously furnished room with a sitting area in Huxley House. The property boasts a full leisure complex with pool and self-contained spa

It has a gym, swimming pool, stables, wine cellar and staff quarters, while the main en-suite bedroom boasts not one but three separate bathrooms.

Her client thinks it’s perfect for his needs — but Covid rules mean he can’t get into the country to see it, and he’s not prepared to spend £30 million without viewing. It means no sale.

‘It’s been frustrating,’ says Mary. ‘Sometimes properties go before you get a chance to get to them, but the last thing that I would want to do is create any sense of urgency or pressure.

‘Sometimes you might build a relationship for two years before you even get to a stage of looking at a property.’

‘It’s like being a matchmaker for property,’ says Diana. ‘I see them as being in a relationship with my client and ideally it’s long-lasting.’

The rest of us, meanwhile, can only look on and dream.

Britain’s Most Expensive Houses starts on Channel 4 at 9pm on December 29. All episodes available for viewing and download on All 4 from that date.