Enigmatic Norwegian musical duo Royksopp are reluctant to explain themselves when it comes to their two new Profound Mysteries albums.

“Embrace the mystery,” insists Svein Berge. “We want so much with this concept, and there are so many ideas we’ve tried to bake into this, successfully or not.”

But they’re sharing a very personal experience. Ever since they were teenagers – growing up in remote Tromso on Norway’s northern coast, inside the Arctic Circle where the aurora burns the sky on long winter nights – they have been discussing their fascination and preoccupation with the “invisible” and the “impossible”, the most profound mysteries of life.

“When you’re young you think you’ll get answers”, says Torbjorn Brundtland, 47. “When you’re older, you embrace the mysteries more. It can be the very minute to the very existential, vast questions like the origins of the universe. We like to dwell and contemplate these things, it’s a nice kind of itch.”

Profound Mysteries, released in April, was their sixth studio album, the first since 2014’s The Inevitable End, which, at the time, they had called their last. Profound Mysteries II, just announced, is due in August.

“We wanted it to be more than just one album. We wanted it to be big,” says Berge, 46 (the pair often finish each other’s sentences). “We want so many things with this, because this questioning, the pondering, has stuck with us since we were kids. It’s one of the things that made us friends when we were kids.” 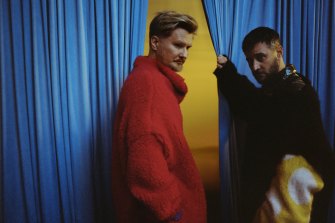 The itch has been scratched not just with music, but with art. Profound Mysteries I and II are the soundtrack to a multimedia conceptual project of short films and artwork, accessed through a “Profound Mysteries Portal” on their website.

Berge says they are all “equal parts of the Profound Mysteries universe”.

The artist is Jonathan Zawada – an Australian whose exhibitions of oil paintings, sculpture and video have been presented around the world including Los Angeles, Paris and Tokyo. He is best known in Australia for his “metamathemagical” 2018 projection that lit up the Sydney Opera House sails for Vivid in 2018, but he also has a long history of working with musicians including the Avalanches, Dua Lipa and Flume.

Brundtland says the project came about after decades of creating music and videos – ever since their 2001 hit debut Melody AM they had the idea of this “concept album” in their heads.

“But we haven’t felt that we had the time or the space to do so,” he says. “There is this thing with age, about accumulating experience and living life. There’s more to be said without being pompous or self-centred now, as opposed to being 22 and preaching to the world about your life experience. It felt right to embark on this venture, Profound Mysteries, now.”

Berge says the new albums are “the story of their lives” musically as well as thematically (he then apologises for sounding “pompous, borderline embarrassing”).

“Within the albums, we wanted to touch on our musical upbringing from when we were kids all the way up to now,” he says.

“One track is a nod to ’80s Italo-disco, which we loved in the ’80s and which we love now, ’90s rave music which we loved then and we love now. These notes throughout the albums tell a story of Royksopp and our origins … we are influenced by these different genres but when we incorporate them, we don’t copy and paste replicas of it, we bring certain elements into our world.”