The Tokyo Olympics are almost upon us, 12 months later than scheduled, and not even the athletes know what to expect.

When swimming champion Cate Campbell and basketball star Patty Mills carry the Australian flags into the stadium during the opening ceremony on Friday night, it will signal the start of an Olympic Games like no other. There will be no fans in the stands and only a handful of athletes will be released from their bio-secure bubble to march. 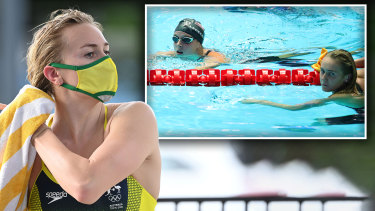 The clash between Ariarne Titmus (main) and Katie Ledecky (inset with Titmus at the 2019 World Championships) in the 400m at the Olympics will be one of the races of the Games.Credit:Getty Images

A team of journalists from The Age and the Sydney Morning Herald is in Japan to bring you all the sporting drama, news and analysis from the biggest show on earth, and convey the unique atmosphere of an Olympics during a pandemic. 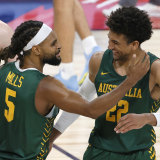 Patty Mills and Matisse Thybulle have key roles to play for the Boomers at the Tokyo Olympics.Credit:Getty Images

Lutton will bring you all the action from the pool, including the showdown between Olympic champion Kyle Chalmers and his American rival Caeleb Dressel, and the epic battle between Ariarne Titmus and Katie Ledecky in the 400m freestyle.

Gleeson will be at the track, where the middle distance runner from King Island, Stewart McSweyn, is a medal hope in the 1500. For more stars to watch, check out our guides to the local and international athletes you don’t want to miss.

For Friday night’s opening ceremony, join Phil Lutton from 8.30pm as he brings you all the colour and excitement from Tokyo’s Olympic Stadium.

From Saturday, tune in daily from 7am until midnight so you don’t miss a medal, with breaking news and results as they happen, plus opportunities to interact with our bloggers through comments, quizzes and polls.

Look out for our quick guides to the new Olympic sports, karate, sport climbing, skateboarding, 3×3 basketball and surfing. How did they get into the Olympics and how do you win gold?

From Saturday, Never miss a medal or great sporting moment with our Olympic update emailed daily. Sign up for our Sport newsletter here.