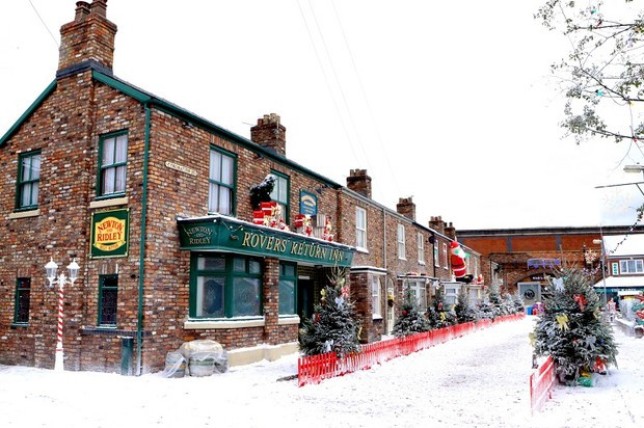 Christmas is notoriously a time when soaps pull out all of the stops for dramatic storylines for us to enjoy over our dried turkey and stuffing sandwiches but Coronation Street are treating us early with a blockbuster October week packed with stunts, tragedy, twists and showdowns.

Does that mean that Christmas will be boring then?

Not according to boss Iain MacLeod, who has revealed that the events of the week to come will lay the groundwork for big Christmas storylines and beyond.

He told Metro.co.uk: ‘Having done a number of event weeks, it’s only worth doing if the aftermath is more interesting than the week. It’s all very well blowing up the Street so to speak, but it only means so much if it doesn’t change lives or have an aftermath.

‘There are brilliant final chapters but exciting novel and new chapters in other stories – some of which are surprising. It’s a launch pad for Christmas and New Year, absolutely.’

One of the main story strands that will not be over in the high octane week is the hate crime strand. So will Corey brent finally get his comeuppance ahead of Christmas. It’s the top of our wishlist for sure.

Iain said: ‘That story has been among our biggest storylines of the year, if not the biggest. The actors involved are stellar, it has made some important points about kindness and the world we live in today. Equally it occupies an area that lends itself to a high octane chapter.

‘It’s not the end of the story by the way. But it felt weird not to have the biggest story of the year in the biggest week.

‘There was always going to be a chapter where the people most affected by what he had done would have a battle with their conscience over how to get revenge.’