Jennie’s long-lost twin brother, Todd, will be found — by someone — now that The CW’s DC’s Stargirl has cast the role of Green Lantern Alan Scott’s son aka Obsidian.

Tim Gabriel, whose previous TV credits include guest spots on S.W.A.T. and a very recent episode of Better Things, will fill the role of Todd Rice, EW.com reports.

The second episode of DC’s Stargirl Season 2 opened with a a brief flashback to just six days prior, where Jennie (played by Ysa Penarejo), the young woman that Courtney (Brec Bassinger) had unexpectedly faced off against in the kitchen, “aged out” of the Milwaukee group home where she had been living. As a parting gift, the annoyingly perfect Jennie was given a lozenge tin that long ago had been dropped off for her — containing a toy car that belonged to her brother Todd… as well as her father’s Green Lantern ring.

After sticking around long enough to get a handle on her own powers, Jennie split, to find out where Todd had landed. But in a season-ending bonus scene, Nurse Louise Love (Lynne Ashe) at the Helix Institute for Youth Rehabilitation was seen telling someone that Green Lantern’s daughter is back looking for her brother — and that she left behind a new bunch of friends in a small town in Nebraska populated by heroes and villains. 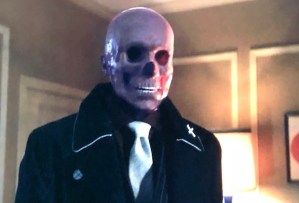 “Heroes and villains, side by side? What an interesting experiment,” mused Mister Bones, voiced by Keith David. “Perhaps we should take a trip….”

Per EW, Todd, as in the comics, is LGBTQ and possesses “strange and uncontrollable shadow abilities.” He has similarly been searching for his sister Jennie, but is at risk of first being found by The Helix Institute and Mr. Bones.

DC’s Stargirl Season 3 is expected to premiere this summer.

Want scoop on Stargirl, or for any other show? Email [email protected] and your question may be answered via Matt’s Inside Line.