The classic movie musical Singin’ in the Rain turns 70 years old in 2022. Gene Kelly, Debbie Reynolds, and Donald O’Connor star in Singin’ in the Rain, and each one has memorable solo numbers. However, the finale of the film was supposed to include all three of them. O’Connor wasn’t available to participate anymore because of another film commitment,

O’Connor explains the conflict in an audio commentary track recorded for the 2002 DVD release of Singin’ in the Rain. Warner Home Entertainment released the film on 4K UHD but included all the previously recorded extras from the previous releases.

Why isn’t Donald O’Connor in the ‘Singin’ in the Rain’ finale?

In 1950, O’Connor starred in Francis as an Army lieutenant who can hear an army mule talk to him. Francis was a hit and there were many sequels. The third film also came out in 1952 and precluded O’Connor from participating in the finale of Singin’ in the Rain, though he would ultimately star in six Francis movies. 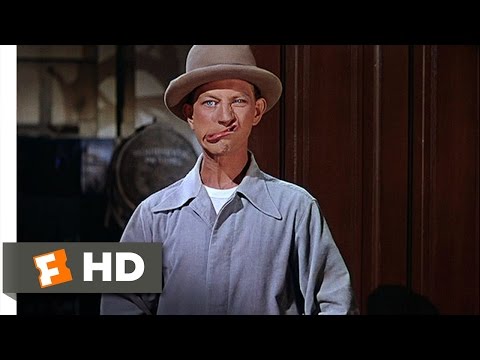 “They preempted me at Universal,” O’Connor said. “To refinish the picture took us about nine months if I recall correctly. Then Gene had to leave and do something on American in Paris or a ballet or something. Then he was gone for something like four months to shoot the other thing. Well, the studio had other plans for me. They wanted me to work with the jackass again, Francis. So that was very important to them so I went back and I was preempted. That’s the reason I’m not in the finale.”

‘Singin’ in the Rain’ originally included Donald O’Connor too

The commentary track also features historian Rudy Behlman. Behlman said an early version of the Singin’ in the Rain script featured all three stars in the title number. Here’s how it became a Kelly solo.

It was said in the script that after the disastrous preview, that the three characters played by Gene Kelly, Debbie Reynolds and Donald O’Connor in a funk would go to this restaurant. It was a fun place and they started performing things out of their old Vaudeville times. Then they left the restaurant somewhat picked up from the fun and games they were having and it was raining out. So the three of them going down the street were singing ‘Singin’ in the Rain’. That was the way it was conceived. As time went along and Gene became more involved, he wanted to do it as a solo which makes sense.

After 70 years, you can still find something new in the film.The 4K UHD of Singin’ in the Rain looks like it’s never looked before. 4K boasts unreal clarity, but with the surreal coloring of technicolor it’s bringing a Hollywood construct into stark reality. The film’s elaborate costumes are a visual feast, beginning with the introduction at Grauman’s Chinese Theater. You can see all the detail in the fabric and silver shimmies of Lina (Jean Hagen)’s party gown, and then the period piece Duchess costume.

Each musical number has a distinct color palette. “All I Do Is Dream Of You” features a gaggle of dancers in pink with pastel streamers around them. Seeing Kelly’s yellow vest and Cyd Charisse’s green dress and shows against a red stage is quite an image. There’s also the blue conveyor belt with all the costumes that pass by. All the dancers’ grace flows so smoothly around the whole frame.