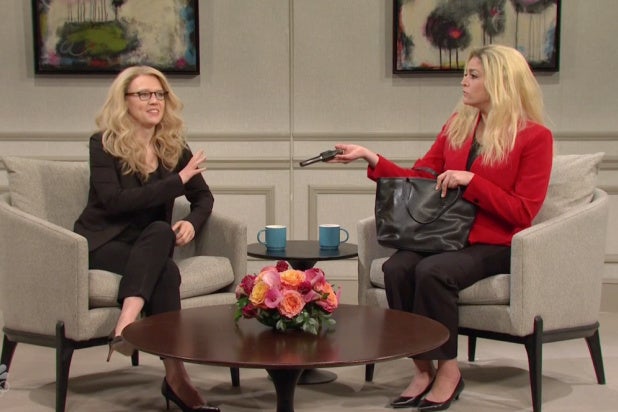 It’s been more than a month since “SNL” went into its winter break, and good lord what a time it’s been. Since the show’s Christmas episode on Dec. 19, COVID-19 deaths surpassed 400,000 people in the U.S., Joe Biden was sworn in as president with Kamala Harris as the first woman vice president, and oh yeah, Trump incited a violent and deadly uprising at the capital in his final attempt to overthrow the election.

What we’re saying is that “SNL” had a lot of back material to choose from for its first cold open sketch of the Joe Biden era. But “SNL” opted to not to look back on any of that and instead kicked things off with a riff on the some of the week’s weird news via a fake tv talk show called “what still works?” starring Kate McKinnon.

Next up, the sketch dealt with the crazy Game Stop stock market news with Pete Davidson showing up as CEO “Derek Boner” of the video game retailer. Verdict: The stock market also doesn’t work.

This was followed by Alex Moffat as Facebook CEO Mark Zuckerberg and Mikey Day as Twitter CEO Jack Dorsey to talk about whether or not social media still works. (It doesn’t.)

This was followed by Keenan Thompson as OJ Simpson to demonstrate that apparently vaccination distribution isn’t working. (But it is, everyone get vaccinated as soon as possible.)

Finally, host John Krasinski showed up as Tom Brady who, the show declared, did work.

Of course, this means Maya Rudolph did not return as Vice President Kamala Harris, and Alex Moffat, who on the last episode of “SNL” was revealed as the surprise choice to replace Jim Carrey as Joe Biden, didn’t play the new president. And yep, no Alec Baldwin as Trump either.