The Masked Singer: Sausage sings ‘I Will Survive’

Sausage blew The Masked Singer panel away on Saturday evening as they performed an energetic rendition of Gloria Gaynor’s I Will Survive. Although the contestant managed to keep their identity a secret by securing a place in next week’s show, this didn’t stop ITV viewers from making their predictions as to who is competing. As it’s clear the person inside the elaborate costume is musically trained, one fan unearthed a previous clue which could indicate Jane, 57, is showcasing her vocal abilities. 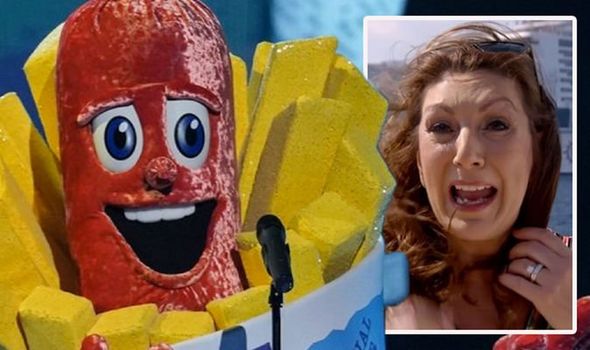 Over the last few years, the former Loose Women star has been featuring in the BAFTA award-winning programme, Cruising with Jane McDonald.

This has taken the television veteran around the world, seeing the best that the world has to offer as well as performing a song or two.

With this in mind, one viewer wrote on Twitter: “Watching #TheMaskedSinger and the wife just said that sausage is Jane McDonald as she’s well-travelled.”

Some others seemed to think the same as another added: “Stab in the dark with Jane McDonald as Sausage #TheMaskedSinger.”

“I’d love it if Sausage ended up being Jane McDonald #TheMaskedSinger,” a third fan quipped as the guesses kept on coming.