With apologies to Nike, “Just duet” became The Voice’s unofficial motto Monday night as the episode finished up Season 22’s Blind Auditions and began the Battles. Or, as I think of them, the round in which we are forced to reconsider why some of our early favorites were our favorites in the first place and say goodbye to others owing to befuddling decisions on the part of coaches John Legend, Blake Shelton, Gwen Stefani and Camila Cabello. Are you ready? Me, neither. But let’s dive in, anyway. The only way out is through!

The Last of the Blinds

Kim Cruse (Team Legend), “Best Part” — Grade: A | From note No. 1, this viral-video sensation from small-town Texas had me eating out of the palm of her hand and coming back for seconds. How can I even describe the four-chair turn’s richer-than-rich, expressive voice? It was like the warmest, fuzziest blanket ever, and once it wrapped itself around my ears, I never wanted it to let go.

Steven McMorran (Team Camila), “Never Enough” — Grade: A | A well-established songwriter whose credits include releases with Celine Dion, Tim McGraw and Michael Bolton, this 40-year-old father of two rolled out an extremely polished performance that demonstrated great range, power and control but only got one chair turn — I would presume because the teams were already almost full.

Rowan Grace (Team Gwen), “traitor” — Grade: B+ | I know you’re gonna say I’m going soft, giving out so many good grades, but c’mon, Monday’s singers were pretty damn good, no? And honestly, I wanted to give this high-school junior an “A” for her Olivia Rodrigo cover, because what the three-chair turn might have lacked in precision, she more than made up for in emotion. 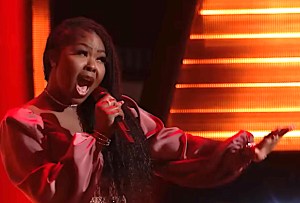 Constance Howard (Team Camila), “Peaches” — Grade: B | This 27-year-old schoolteacher made Beliebers of John and Camila with her Caribbean-inflected take on the former teen idol’s hit, a voice that they called distinctive to the nth and a whistle note so Mariah-worthy, Blake suggested that it “defies science.” So why wasn’t I blown all the way away? 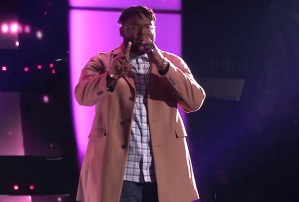 Justin Aaron (Team Gwen), “Glory” — Grade: A- | An aspiring contemporary Christian/gospel vocalist, this 37-year-old hit the stage singing to the heavens and whatever comes beyond ’em. His humongous voice rumbled like thunder as he went on enough runs to make ya think he was training for a marathon. But, it being late in the game — and John being finicky about people performing his songs — Justin only got one chair turn.

Jaeden Luke (Team Blake), “Make It With You” — Grade: C | This mustachioed musician, who once opened for Chris Isaak, got both Blake and John to turn their chairs with the breathy Bread cover that he sang to Camila. And it was perfectly pleasant — too mellow to be anything but. I just didn’t hear anything wow-y enough to make me think he’d make it through the Battles.

Nia Skyfer (Team Legend), “Bam Bam” — Grade: B | With kind of a Tank Girl style, this Camila fan brought to the show not only a lively stage presence and a playful personality but a voice strong enough to hold up even as she moved around (a lot). If her coach can channel that energy of Nia’s, she could turn into a contender.

The First of the Battles 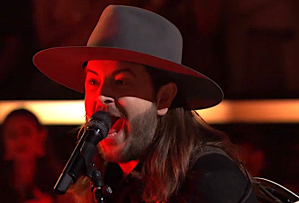 Team Blake: Austin Montgomery (Grade: A-) vs. Tanner Fussell (Grade: A) on “Folsom Prison Blues” | With Jimmie Allen as Battle advisor, Blake suggested that Austin loosen up and Tanner not try to force in his gritty snarl inorganically; the Johnny Cash classic gave him enough chances to show it off. On stage… man, I love Austin, but he was totally smoked by Tanner, whose yodel was every bit as good as his opponent’s, lower register was more jaw-dropping and stage presence made me feel like I was watching a Western. Since this Battle ended in a “to be continued,” I’m gonna go out on a very sturdy limb and guess that on Tuesday, Blake will name Tanner the winner, and Austin will be either stolen or saved.

Which Blind Audition most moved you? And whose Battle performance did you deem a winner? Vote in the polls below, then hit the comments.