Screen legend Bette Davis wasn’t done with her career at the age of 72. The late All About Eve star appeared in Disney horror movie Watcher in the Woods in 1980 as an aging, bereaved mother who owns a gothic mansion. And it turns out she also wanted to play the younger version of that same character. 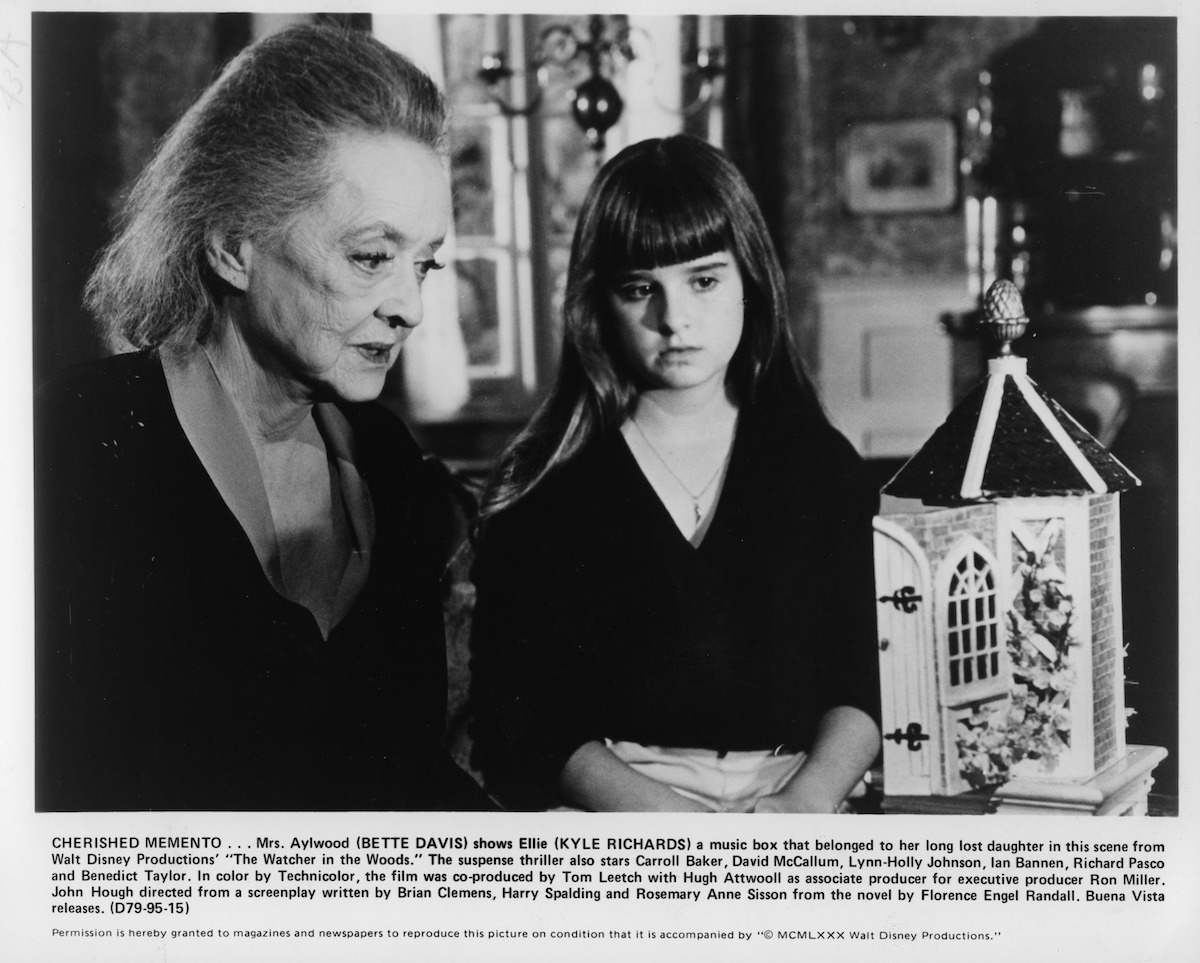 According to Wikipedia, Bette Davis was 72 years old when she approached the role of creepy Mrs. Aylwood. Watcher in the Woods is a cult classic — one of several disturbing movies to emerge out of Disney’s fabled ‘Dark Phase.’

Mrs. Aylwood is the owner of a gothic English residence. She’s both a widow and a grieving mother. Moreover, she must selllher house, but doesn’t want to. Something happened to her daughter, Karen, there. She’s haunted every moment by her disappearance years earlier.

When a small family moves into the creepy residence, sisters Jan (Lynn-Holly Johnson) and Ellie (Kyle Richards of Halloween Kills) begin to experience a strange, ghostly presence. Additionally, Mrs. Aylwood, ancient and haggard with grief, intensifies their fears and suspicions.

The 1980 film was an interesting choice for Davis. Her career in old Hollywood and beyond is iconic at the very least, and monumental at best. She starred in classics in her middle-career including Hush Hush Sweet Charlotte (1964) and Whatever Happened to Baby Jane? (1962).

Perhaps Bette Davis’ most iconic role in All About Eve (1950), a movie that revolves around themes of fame, beauty, and youth, affected the way she approached Watcher in the Woods.

According to a 2002 Anchor Bay DVD audio commentary by the movie’s director John Hough, Bette Davis’ role was difficult to approach. That’s because Mrs. Aylwood appears as both a young and very old mother, in two separate time periods.

As a result, Davis decided she wanted to play both roles. Hough states in the commentary that Davis “desperately” wanted to be young and old Mrs. Aylwood. Moreover, that proved challenging for producers.

The late Bette Davis had some clout. So producers sent out for makeup effects specialists along with hair specialists, which were flown in from Los Angeles to England. They were looking to make Davis look roughly three decades younger than her 70-plus years.

However, the result wasn’t what they’d hoped when they viewed the screen tests. Hough reportedly stated that the efforts “maybe knocked about twenty years off of her age, but not forty,” according to the movie’s Wikipedia page.

So, Hough recounted, he had the screening room cleared for a word alone with the legendary actor. “Bette, I don’t think you’ve made it,” he reportedly said. And her response was to take a long drag from a cigarette as if she were in a scene from a 1930s movie. 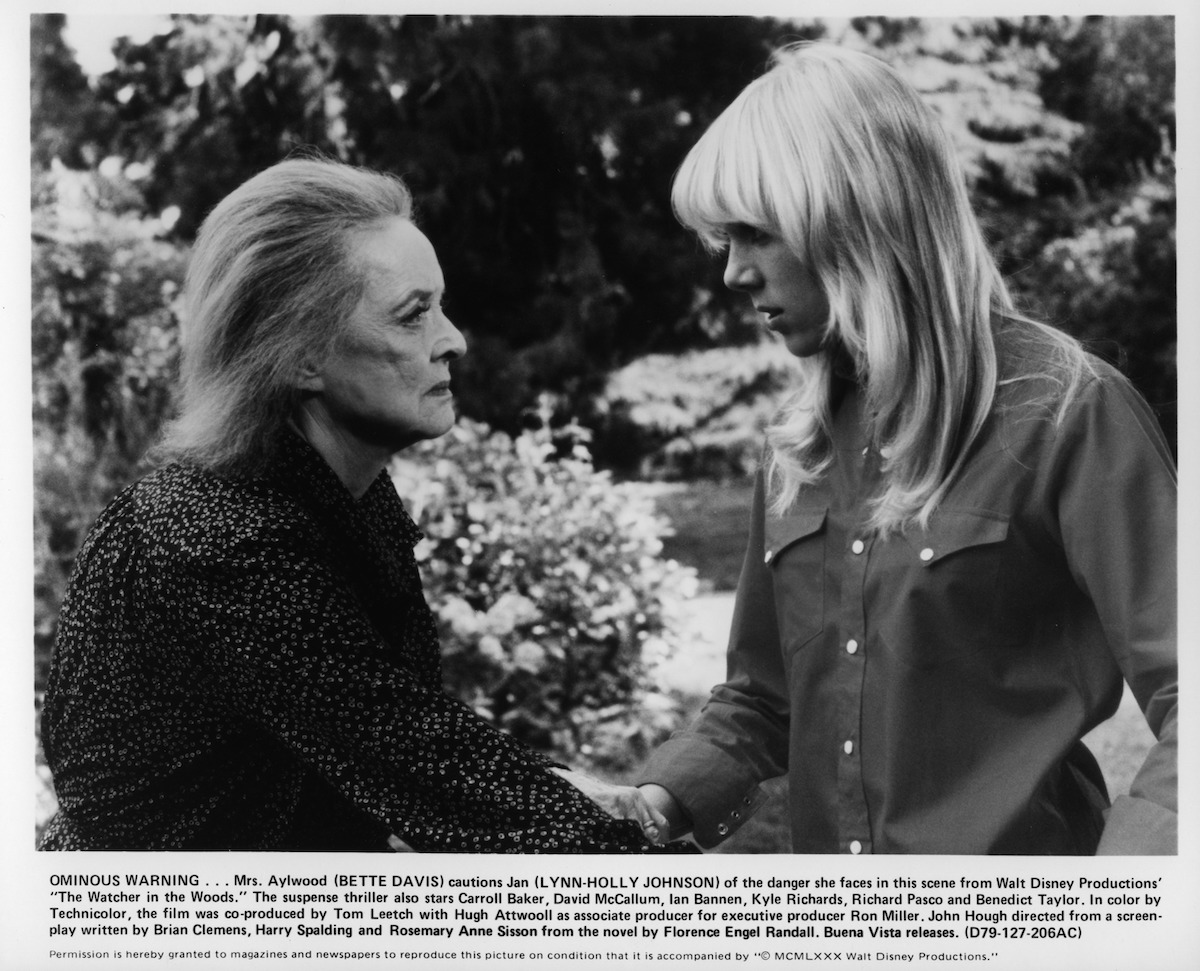 On a horror movie budget of just $7 million and a production abroad, The Watcher in the Woods went on to become a horror cult classic. That’s at least partly because Bette Davis’ performance was utterly, shiveringly, outstanding. And strangely tender and maternal, as well.

Additionally, it courted controversy.  Audiences were so upset by the initial screenings at just one theater, that producers pulled the scary Disney movie and then re-released it 18 months later.

So even though Davis didn’t get to play the younger Mrs. Aylwood, she still defined a terrifying role for a generation who loves the movie to this day.