After a season of rapid growth, Baby Colin Robinson officially dropped the “Baby” from his name in What We Do in the Shadows‘ Season 4 finale.

Tuesday’s episode begins with Colin as a sullen teen listening to death metal… although he still cries in Laszlo’s lap after a game with other boys doesn’t go his way. “It’s like he’s half kid, half adult,” Guillermo explains as he attempts to teach Colin how to play baseball, but the kid just wants to hammer holes in the wall. A wistful Laszlo is left to sing “Sunrise, Sunset” from Fiddler on the Roof as he reflects on his boy’s accelerated adolescence. Nandor tries to get through to Colin — he used to motivate teen soldiers to serve as cannon fodder on the battlefield — but his efforts to connect are just met by a jerking-off motion from Colin.

Nadja’s nightclub, meanwhile, is in bad shape: Without Baby Colin’s act, attendance is way down, and they’re bringing in coins when they used to bring in stacks of cash. (A few of which Nadja has secretly squirreled away in her office.) The Guide brings in P.T. Barnum to tell them how to bring in crowds — but wait, isn’t he dead? Yes, she admits she’s learned how to summon the dead, and Nadja realizes that reanimating corpses of famous people could be a great way to get people in the door. 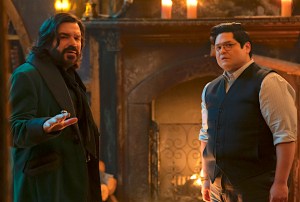 Colin is still acting out, even stealing neighbor Sean’s car and driving it into a creek. Laszlo tries to talk sense into him, but Guillermo thinks Colin is actually still feeding on them, not by boring them, “but by infuriating us.” So Laszlo has to sit Colin down and explain that he was born an energy vampire, which sends a frustrated Colin back to his room to hammer more holes in the wall. Guillermo, though, is starting to feel a little bored around the house, with no kid to take care of and Nandor’s wife gone. Nandor is perfectly happy to read books for the next 20 years or so… but it seems like Guillermo wants more.

Nadja’s bright idea of bringing back the dead doesn’t help: Her panel discussions with icons like Gandhi and Hemingway are too dull to draw a crowd, and a sponsored online stream only nets them about half a cent in revenue. So she decides to give up and torch the place, but the next day, she discovers the blood sprinklers have put out the fire. The only thing that burned up was her office, where all her secret cash was stored — and she never bothered to find out what “insurance” is. Oh well.

Colin keeps hammering away at the wall until he finds a metal box inside the wall holding a single photo slide. He gets out a slide projector and finds the slide is a guide to three spots on the wall. He hammers there and opens up a secret room filled with boxes of files and old journals. He sits down to read one, and his hair starts to fall out. He squints his eyes and finds a pair of glasses to wear. Next thing we know, he’s back to his old bald, boring self, droning on about tax laws. He found his old diaries, which triggered a return to his former incarnation. He reveals they have about $650,000 in their bank account, which should be enough to remodel the house, but he insists on micromanaging the contractors. He also tells Laszlo he doesn’t remember a thing about being a kid performer… but he walks away whistling a jaunty tune. 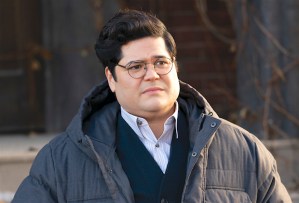 But that’s not all! Guillermo decides it’s time to move out of the house, since nothing ever changes around here, and presents his vampire pal Derek with a bag full of cash from the newly accessible bank account. “You’re gonna make me a vampire,” he declares.

Happy to have Colin back? Ready to see Guillermo get his fangs? Give the Shadows finale a grade in our poll, and share your thoughts in the comments.