Taking to his social media account, the 31-year-old son of the late guitarist blasts the Reelz network over its TV documentary special dubbed ‘Autopsy: The Last Hours of Eddie Van Halen’.

AceShowbiz –Wolfgang Van Halen responded to a documentary focusing on “the last hours” of his dad and late rock legend Eddie Van Halen. Taking to his social media account, the 31-year-old blasted the Reelz network over its TV documentary special dubbed “Autopsy: The Last Hours of Eddie Van Halen“.

Putting the documentary on blast, the son of the late guitarist made it known that he’s against the project. “F*** @ReelzChannel, f*** everyone that works on this show, and f*** you if you watch it,” Wolfgang wrote on Wednesday, June 1 on Twitter. “F***ing disgusting trying to glamorize someone’s death from cancer. Pathetic and heartless.” 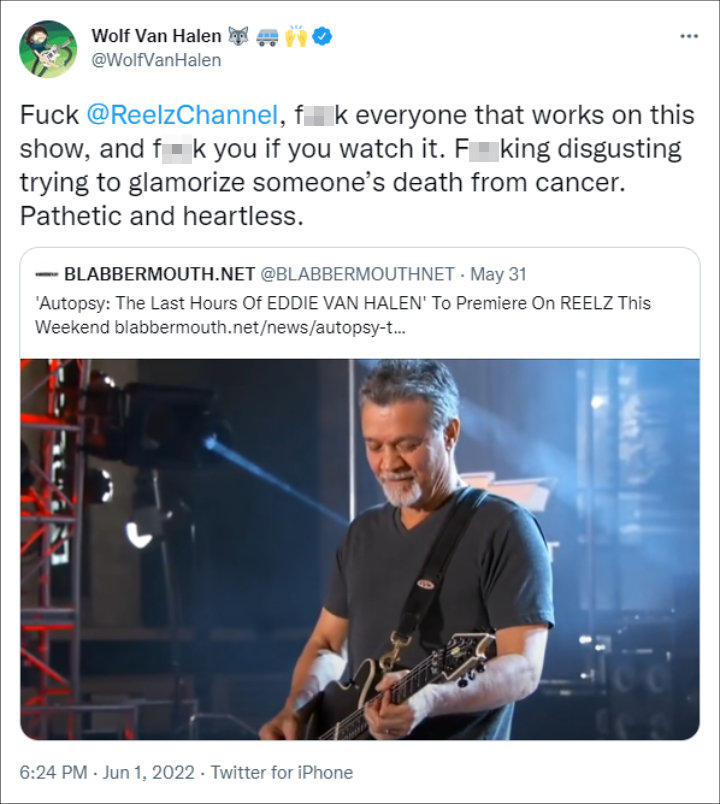 Also responding to the documentary was Wolfgang’s mom and Van Halen’s second wife, Valerie Bertinelli. “Good Christ this is disgusting,” she said.

Fans also despised the documentary. “They don’t think about celebrities as being human beings first with families who love and miss them more than the public can fathom. This should be illegal. Why don’t the HIPPA laws apply even into death? It’s still a medical record!” one person commented.

“I’m with you WVH,” another person showed support for Wolfgang. “They obviously didn’t consult with your family about this. Highly disrespectful. Just know that you’re the legacy of one of the greatest musical families of the 20th & 21st centuries. Hell, I’m proud of ya, kid!”

Meanwhile, the official description of the documentary reads, “On October 6, 2020 the world was shocked by the news that guitar legend Eddie Van Halen had died. A rock prodigy with a boyish charm he was never more comfortable than when he had a guitar in his hand. Known as the founder of VAN HALEN, the band that became synonymous with California cool, Eddie was actually of both Dutch and Indonesian heritage.”

Of the musician, who died in October 2020 following a long battle with cancer at the age of 65, it also notes, “But behind his contagious smile there was a darker undercurrent that would plague Eddie throughout his life. As an extremely shy kid Eddie started drinking alcohol at just 12 years old to calm his nerves after seeing his father drink to calm himself and for the next four decades Eddie wrestled with addiction issues. Often relying on alcohol and other substances to maintain his creativity Eddie would spend many years in and out of rehab.

“He was a workaholic often pushing his body to the limits in order to perform while secretly battling illness. Eddie died at the age of 65 from cancer but if caught early Eddie’s disease had reasonable survival rates so what exactly happened? Now renowned forensic pathologist Dr. Michael Hunter will analyze every detail of his life in order to piece together what else may have been going on in his body, ultimately leading to his untimely death,” it concludes.