‘You’re never too young to do anything!’: Real-life Doogie Howser is accepted to medical school in Alabama after prodigy wraps up her TWO undergraduate degrees in biological sciences

A 13-year-old girl was accepted to medical school, all while wrapping up a pair of undergraduate degrees from two different universities and graduating from high school a year ago.

Alena Analeigh Wicker was accepted into the University of Alabama’s Heersink School of Medicine class of 2024 in June, despite being over 10 years younger than the average medical student.

Her acceptance comes as she continues working through her degrees in the biological sciences degrees at both Oakwood University and Arizona State University, and makes her the youngest black student to be accepted to medical school.

‘What is age?’ Alena told The Washington Post, ‘You’re not too young to do anything. I feel like I have proven to myself that I can do anything that I put my heart and mind to.’ 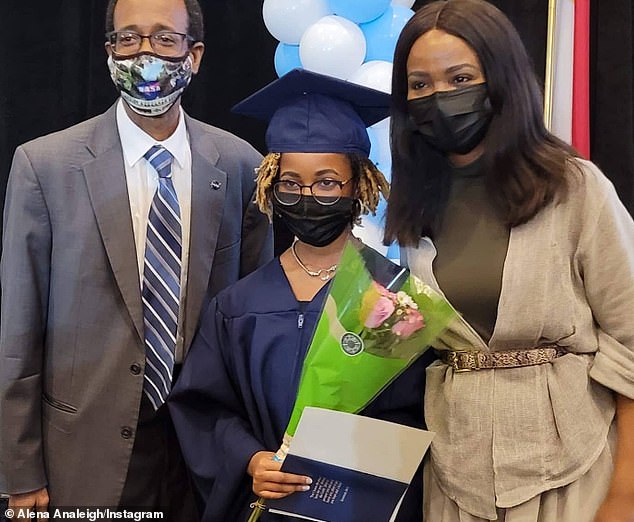 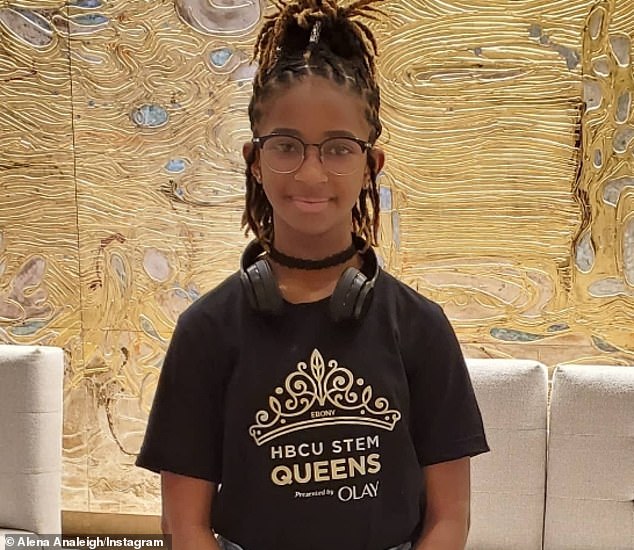 Alena Analeigh Wicker, 13, was accepted into the University of Alabama’s Heersink School of Medicine class of 2024 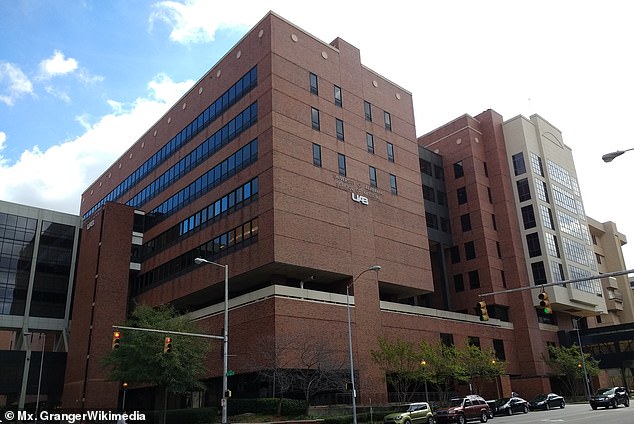 University of Alabama ‘s Heersink School of Medicine. Alena was accepted to join the class of 2024

Alena lives outside of Fort Worth, Texas, and does most of her coursework online.

She is also the founder of the organization Brown STEM Girl, which strives to help girls of color explore futures in the fields of science, technology, engineering and mathematics.

‘We’re showing the world that there’s other girls out there that are just like me, and they deserve an opportunity and a chance,’ Alena said of the program.

Alena was adopted by her mother, Daphne McQuarter, who said she knew from an early age that her daughter was different.

‘Alena was gifted,’ McQuarter explained, saying she knew Alena was special as early as three-years-old, ‘It was just how she did things and how advanced she was. She was reading chapter books.’

She flew threw schoolwork, and was so intelligent in her early years that her mother had to home-school her to avoid the bullying from kids who called her things like ‘smarty pants.’

By the fifth grade though she returned to the classroom, but instead of studying the typical ten-year-old fare she focused on an advanced high school curriculum.

‘I was bored,’ Alena said, ‘The high school work was so easy for me that I ended up graduating from high school at 12 years old.’ 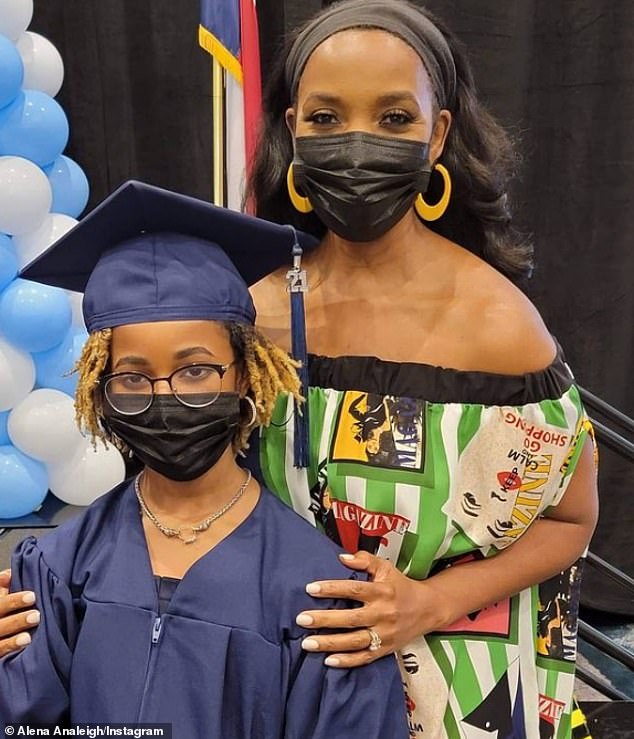 Alena at her high school graduation at the age of 12 in 2021. She was accepted to medical school a year later 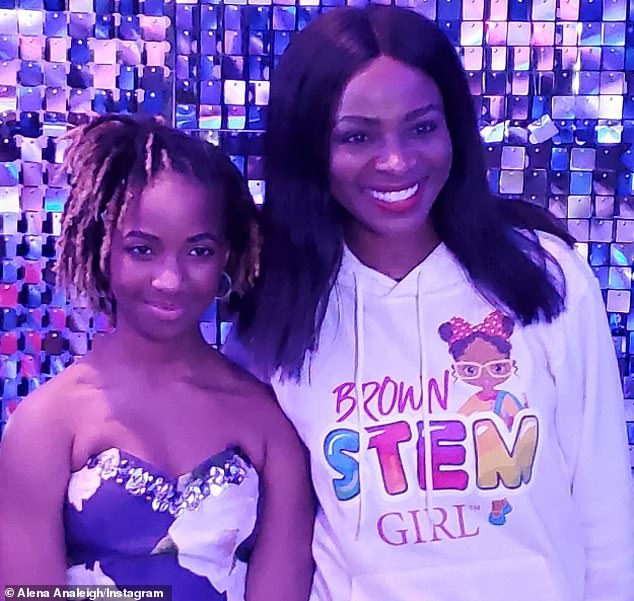 Alena alongside DeSoto, Texas, mayor Rachel Proctor (right) who is a wearing a sweatshirt from Alena’s organization, Brown STEM Girl

The prodigy also became NASA’s youngest intern last summer, back when she thought she wanted to pursue engineering.

Clayton Turner, director of NASA’s Langley Research Center, hired Alena after coming across a news story about her in which she said she dreamed of working for NASA.

‘Alena is one of those exceptional intellects,’ he said, but clarified her mind wasn’t the only thing that made her stand out, ‘What’s in her is wanting to help others, wanting to lift up others.’

Once Alena began to explore biology in her undergraduate studies, she said she knew right away it was the path for her.

‘I wasted no time. I dropped a class, changed my major, and when I took my first biological class, I knew in that moment that this is what I’m supposed to be doing,’ Alena said. 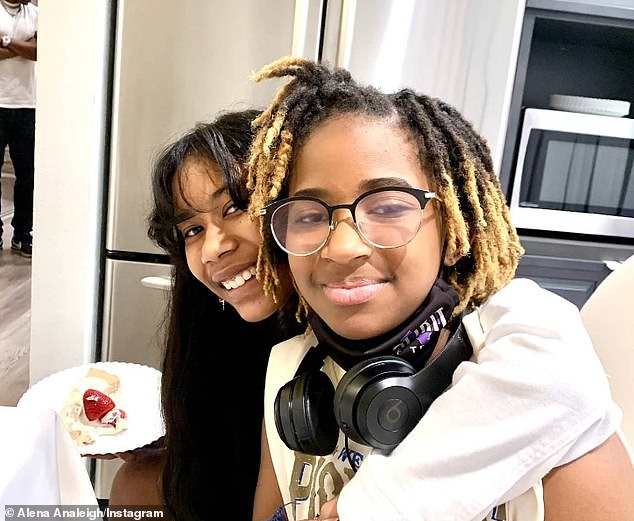 Alena Analeigh Wicker, 13, (right) was accepted into the University of Alabama’s Heersink School of Medicine class of 2024 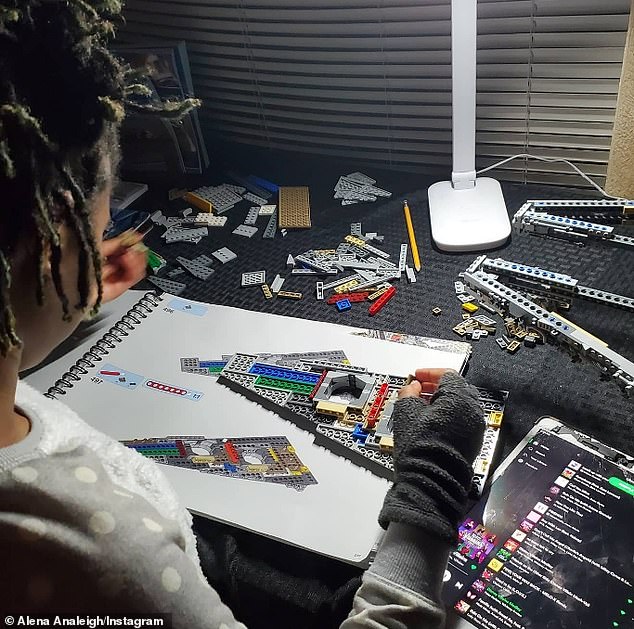 Alena is in many ways a normal girl. She is a Lego fanatic, posting many of her building projects on her Instagram account, and says she loves cooking, singing, going to arcades with friends, and playing soccer 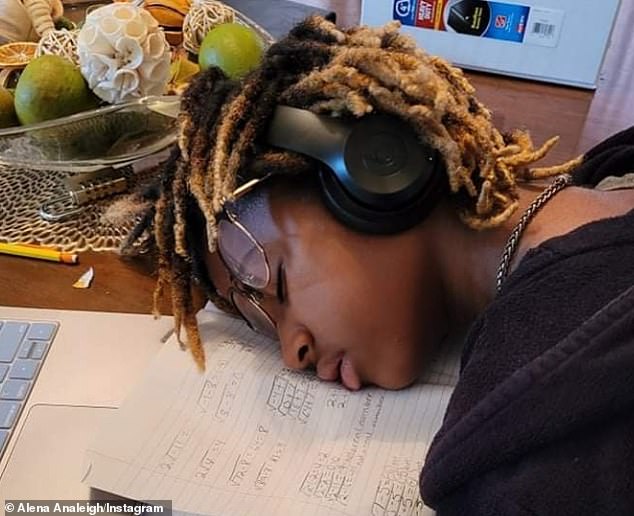 ‘Mama I made it. I couldn’t have done it without you,’ Alena wrote, ‘You gave me every opportunity possible to be successful. You cheered me on, wiped my tears, gave me oreos when I needed comfort, you never allowed me to settle, disciplined me when I needed . You are the best mother a kid could ever ask for.’

To people who say she is missing out on her childhood, Alena couldn’t agree less.

‘I don’t think I’m missing any part of my childhood. I get a childhood, and it’s amazing.’

Alena is a Lego fanatic, posting many of her building projects on her Instagram account, and says she loves cooking, singing, going to arcades with friends, and playing soccer.

Despite her mounting degrees, Alena says her success all comes down to focus.