Singapore: Cambodia’s Prime Minister Hun Sen has questioned when Australia will deliver on a pledge of 2 million doses of the Pfizer vaccine, saying he will buy more from China if they don’t turn up.

The long-time leader told a press conference in the capital Phnom Penh he was counting on the donated vaccines from Australia because the country still needs more despite having one of the most successful immunisation drives in south-east Asia. 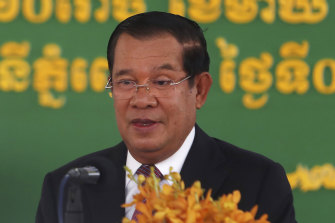 Cambodia’s Hun Sen has leaned on China for vaccines.Credit:AP

“Australia had promised to donate the Pfizer vaccines and this was long overdue but if there is uncertainty about getting it, then our next decision is to buy the Sinovac vaccines,” he was quoted as saying.

“I am aware that the vaccines we have now will not be enough to vaccinate the targeted population including the consideration of vaccinating those three years and above in the near future.“

Hun Sen reportedly instructed Secretary of State Vongsey Vissoth to ask Australian officials there when the one-party state could expect the shipment.

But Australia’s embassy in Phnom Penh said it could not say when it would arrive. 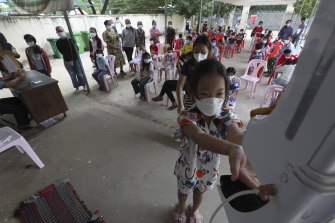 A young girl disinfects her hands before receiving a shot of the Sinovac vaccine at a health centre outside Phnom Penh.Credit:AP

“Australia is not selling vaccines but has committed to share 60 million doses with countries in south-east Asia and the Pacific by the end of 2022,” the embassy told Cambodian government mouthpiece The Khmer Times.

“While commercial negotiations are underway, we are not in a position to confirm with the manufacturer of any vaccines to be provided through procurement, arrangements with UNICEF, or the timing of deliveries.”

Australia has so far sent 5.85 million of the promised 60 million doses to the region, according to an Australian government document. 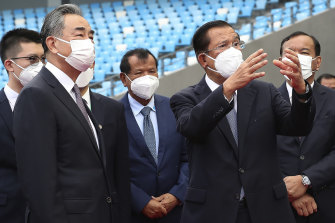 But Labor has called on the Morrison government to extend its deal with manufacturer CSL beyond the 50 million doses of AstraZeneca it is contracted to provide so that vaccines can be directed faster to neighbours in the region.

Cambodia, which has begun inoculating children as young as five after reaching coverage of 85 per cent of its 16 million population, has relied heavily on political patron China for supplies. Most doses have been purchased rather than gifted, although there have been donations from Beijing as well as from the United States and Japan via the COVAX scheme.

While it is not clear when Australia will be able to accelerate its delivery, Hun Sen’s latest tactic is a familiar one, says Sophal Ear, a Cambodian-American associate professor at Occidental College in California.

“It looks like he’s playing his usual game … ‘if you don’t give me what I want, I’ll just go and get it from China’,” he said.

“He’s obviously interested in embarrassing somebody by doing this. There has got to be an ulterior motive of some kind.

“He could take this and deal with it very privately, with back-channel discussions. But instead he chooses to make a big scene out of it. That is his style.”

Cambodia will have an elevated role in the region next year as it takes over as rotating chair of ASEAN. Australia last week signed a comprehensive strategic partnership with the group’s members.

It is a position Hun Sen is expected to use to burnish Cambodia’s image despite him having reduced the country to an effective dictatorship with the banning of the main opposition party and a continuing clampdown on dissent.

Australia’s Department of Foreign Affairs and Trade was contacted for comment.

The Australian government has contributed $130 million to the COVAX program and $623 million towards the distribution of vaccines in the region.