Singapore: China has escalated its push for a relationship reset with Australia ahead of the 50th anniversary of Gough Whitlam’s diplomatic embrace of China, as senior business figures argue the shift “cannot be overlooked”.

Using China’s largest state media network, Xinhua argue the 50th anniversary in December presented a “rare opportunity” to strengthen ties between the geopolitical foes, the Chinese government issued its third call for reconciliation within a week. It followed a letter from Chinese Premier Li Keqiang to Anthony Albanese and Foreign Minister Wang Yi’s calls for co-operation with Australia in the Pacific. 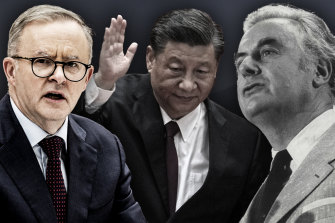 Following objections from Pacific leaders and diplomatic resistance from Australia, China released a watered-down position paper on the Pacific on Tuesday after it was forced to shelve plans for a 10-country strong Chinese-run security, policing and trade deal.

In the paper, China said it would appoint a special envoy for Pacific affairs, provide funding for climate change mitigation, send medical teams to the region, and establish more than 5000 training places. But it made no commitment to policing, cybersecurity or free trade after Wang’s proposals fell flat at Monday’s meeting.

The flurry of coordinated activity aimed at wooing Australia is the highest level pitch for engagement since diplomatic ties were frozen in 2020 over human rights, coronavirus and geopolitical disputes. Beijing’s push, which has put the onus on Australia to repair relations and distance itself from the United States, has so far been rebuffed by Canberra. Albanese has yet to respond to Li’s letter and the government maintains Australia will not re-engage until some of China’s $20 billion in trade sanctions on half-a-dozen Australian exports are lifted.

“The sanctions that have been placed on Australian exports going to China need to be withdrawn,” Albanese said last week after he returned from the Quad summit in Japan. Labor figures who were not authorised to speak publicly said that the government’s position remains the same despite Wang’s comments in Samoa and the recent push by China’s propaganda arm.

But business is more optimistic about a detente than at any time since the election of the Morrison government. Iron ore and industrial metals futures soared on Tuesday as China announced it would ease COVID-19 restrictions in Shanghai, fuelling expectations that Beijing would need more Australian exports to fuel its economic recovery.

“There is no doubt that the tone from Beijing has softened somewhat in recent times,” said Australia China Business Council president David Olsson. “Whether all these herald a more permanent sentiment shift is still an open question.”

Olsson, a partner at Hong Kong law firm King & Wood Mallesons, was among six Australian executives, including from BHP and Rio Tinto, to meet with their Chinese counterparts from Sinosteel and Chinalco for the first time in two years in December. He said the symbolism of the 50th anniversary of Whitlam’s establishment of formal diplomatic ties in 1972 could be used to Australia’s advantage.

Anniversaries are particularly significant to the Chinese Communist Party, which attaches political and social capital to the historic markers to promote its hold on power. 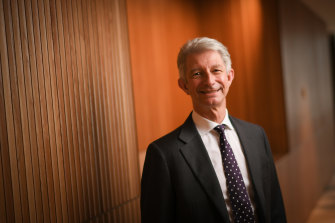 “Despite all our differences, the anniversary is a massively important milestone,” said Olsson. “[It] cannot be overlooked.

“While both sides may wish to tread warily in some areas, it is an obvious opportunity to celebrate the decades of people-to-people, educational, business and cultural connections between both countries, as well as the contribution of the Chinese Australian community to the fabric of everyday life in Australia.”

The chief executive of Grain Growers Australia Dave McKeon said Australian barley growers have been losing $500 million a year since prohibitive tariffs were placed on Australian exports in May 2020. Those sanctions are now being contested at the World Trade Organisation. At the same time, wheat and sorghum exports to China have surged, while other farmers have diversified to Japan and Vietnam.

“We see a bit of a window of opportunity ahead of us. While we need to maintain our values and sovereignty as Australia we can absolutely continue to look at how we can engage in a really constructive way with Australia’s largest trading partner,” he said.

“Hypothetically, if we were to see those tariffs removed, China does have an ongoing high demand for high-quality grain and Australia is a large producer of high-quality grain. We’ve just come off the back of a really large crop. It would be great at some point in the future if we could resume that trade.”

McKeon said he was ready to work with the new Trade Minister Don Farrell to get negotiations moving. “The best course of action is through direct bilateral discussion,” he said.

In its editorial, Xinhua said China and Australia maintained a good relationship “for a long time” that brought both sides tangible benefits. The Chinese government-run news service quoted Fortescue and Minderoo chairman Andrew Forrest praising China for its “great support” during COVID-19 and Melbourne philanthropist and former diplomat Carrillo Gantner urging the relationship to “get back on the rails quickly”.

The business community has been accused of overlooking some of China’s aggressive measures in the region and human rights abuses at home in its pursuit of China’s massive market. That is the challenge that the Albanese government now faces as it attempts to land in a position where it can be critical of China’s actions in Hong Kong, Xinjiang and the South China Sea without the fear of economic retaliation.

Olsson said climate change cooperation could contribute to the repair of the relationship in the long term and strengthen commercial opportunities in the near term.

The climate crisis facing the Pacific was at the centre of negotiations during Wang and Foreign Minister Penny Wong’s visits to the region over the past week. Wang, who flew to Tonga on Tuesday, said on Saturday that he was “willing to enhance communication with all countries that care about Pacific Island Countries, especially Australia and New Zealand”.