Furious tenants have been threatened with court action and given ‘ASBO’ warnings for putting up bamboo screens to protect their properties from nosey bus passengers.

Council tenants of the street in Dartford, Kent, said the absence of suitable fencing is an unacceptable intrusion in their privacy and have likened it to ‘living in the Big Brother house’ as passers-by can look in their properties.

Large hoardings used to be in place when the social homes were nearing completion but they have since been replaced with smaller 5ft black railings.

Residents claim their back gardens – which front two busy main roads in and out of the Temple Hill estate – are left exposed and are constantly littered with rubbish, including bags of dog mess and discarded face masks.

Peeping passengers using local bus services, which stop outside every 10 minutes, are also said to be peering into homes and ‘speaking inappropriately’ to small children who have nowhere else to play. 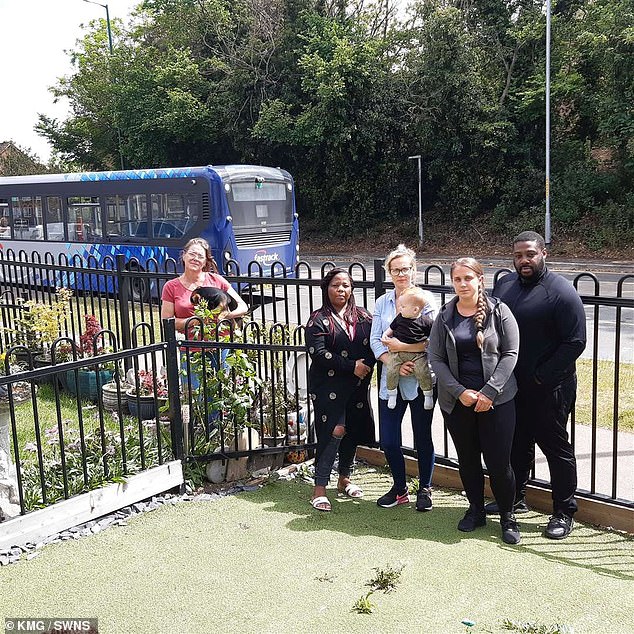 Residents on a social housing estate in Dartford, Kent, have been threatened with court action and ASBOs for putting up DIY bamboo screens and fences to prevent passersby from seeing into their homes through their exposed back gardens

Gaps and the size of the railings also mean pets can easily escape into the road and drugs have even been found in some yards.

Tenants have asked for the height of the railings to be raised and covered.

Dartford council said it is ‘aware of concerns’ and previously changed the fence to try and help the tenants, while complying with planning conditions and the ‘street scene’.

The council is encouraging residents to get in touch with the authority directly so it can keep an ‘open dialogue’ about potential options.

It comes after some fed up tenants took matters into their own hands during the pandemic and erected bamboo screens and fence panels.

They were later told by the council to remove these, either themselves or at a clean-up cost calculated by the authority of £243.49 each.

Some residents have been threatened with court action and handed community protection warning letters over their ‘anti-social behaviour’ and its perceived ‘detrimental effect’.

But the term ASBO was dropped in 2014 and replaced with civil injunctions, CPNs and CBOs in England, Wales and Northern Ireland. ASBOs are still used in Scotland.

Among those to receive the so-called ‘ASBO’ warnings was Jess Evans, 27, who likened the level of exposure in her home to ‘living in the Big Brother house’.

‘Cars are having to stop to stop running the kids over.

‘We have had people staring into our houses to the point where I’m waving at them now because it’s getting so annoying.’

Her biggest fear is her own children’s safety, with two of her young sons having been diagnosed with ADHD.

It is a problem for Jess and other neighbours who must keep their back doors open when cooking, or in the hot summer months, as there are no ground floor windows opening to the rear of the properties, she said.

Jess added: ‘I’m fearful due to being so close to the bus stop and hearing about children being abducted.

‘This may happen as it is so easy to grab a child and get on a bus or car and be gone. This is a garden and should be safe and us not have to worry.’ 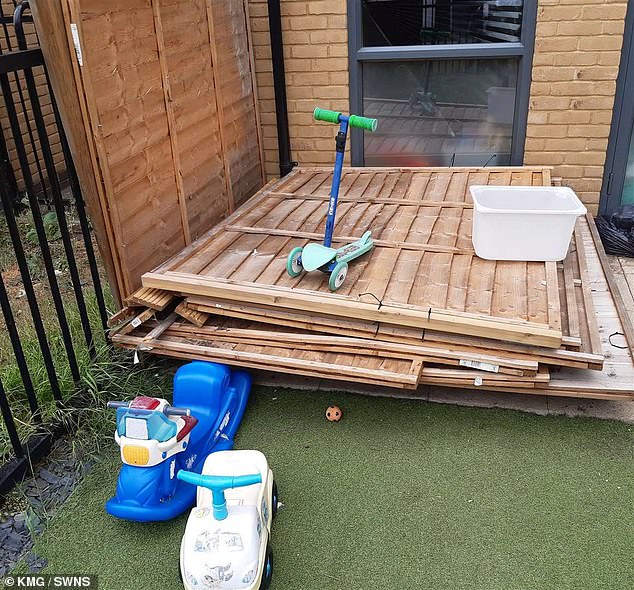 Fences and bamboo screens had to be torn down, after Dartford council said any changes must ‘comply with planning conditions and complement the street scene’ 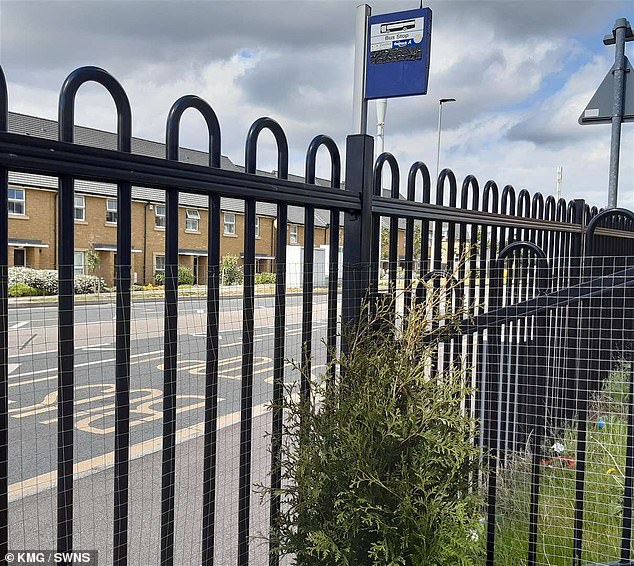 ‘Appropriate fencing would be black plastic mesh or similar but must be in keeping with the aesthetic of the property,’ said Dartford council in a written response

Jess and others contacted local MP Gareth Johnson and have been ‘back and forth’ with council officers but to no avail.

She said: ‘We’ve tried getting planning permission. Every time we’ve spoken to the council it’s all different stories.

Initially, a council officer told Jess that appropriate fencing could be installed provided it was the height of the existing black fence or lower.

‘Appropriate fencing would be black plastic mesh or similar but must be in keeping with the aesthetic of the property,’ they said in a written response.

But after filling out a property alteration form, in line with their instructions, Jess says hers and other neighbours’ requests were rejected due to existing ‘planning conditions’.

Instead, Hill View residents have been told they can erect bushes so long as they are no higher than 1.8 metres.

The block was opened in 2017 by Lord John Atlee, the grandson of former Labour Prime Minister Clement Attlee.

The post-war leader had himself opened the wider Temple Hill estate in 1947.

Last year, one of the homes was shut down temporarily after tenants inside were reported to be causing an ‘unacceptable level of nuisance’ to neighbours, behaving anti-socially and taking drugs.

The current tenants say they do not feel safe and have been told by the council to report any suspicious and inappropriate behaviour to police.

Neighbours said they felt let down by the authority and added that they were good tenants who paid rent on time and deserved better.

Mum Louise Vincent, 36, said it was about safety rather than cost, adding: ‘I would be willing to pay for the fencing for the safety of my children.

‘We’ve been given ASBOs for putting fences up.’

Neighbour Kayleigh Bean, 33, who lives in another part of Hill View said they were being made to feel uncomfortable in their own homes.

She said: ‘It’s also the privacy of the home.

‘People just watching what you are doing inside your home and in your garden.

‘It’s either in their words, become a criminal and get a court action against us, or take the fence down.’

Kent County councillor for Dartford North East Kelly Grehan said she was ‘perplexed’ by the planning barriers, adding that families should feel safe in their own homes and gardens.

She said: ‘I’ve visited these properties and I know I would not feel comfortable using the garden.

‘I have raised this matter several times and frankly I’m perplexed as to how a planning condition was ever granted that basically means any attempts to stop all activity in the garden being on full view on a busy street is a not allowed.

‘I don’t see how any other person would be adversely affected by residents putting up a fence or growing some bushes.’

A Dartford council spokesman said: ‘The council is aware of concerns tenants in Hill View have regarding their privacy and security.

‘The council take such matters very seriously and we have previously considered, and implemented changes to the fence that benefit tenants, comply with planning conditions and complement the street scene.

‘Moving forward we’d encourage residents to get in touch with the council directly so that we can keep an open dialogue about potential options at Hill View.’