Even in the shadow of this week’s mass shooting at a Texas elementary school, former President Donald Trump is going ahead with a speech at the National Rifle Association’s annual meeting in Houston that kicked off Friday.

Hundreds of businesses are also set to appear at the event.

The NRA lists over 600 companies scheduled to participate in the exhibitors’ portion of this weekend’s gathering. The vast exhibit hall will operate all weekend with the website touting “over 14 acres of the latest guns and gear from the most popular companies in the industry.”

The large business presence that’s expected comes amid a wave of attendee dropouts after 19 children and 2 adults were killed in Uvalde, Texas. “American Pie” singer Don McLean was scheduled to perform but withdrew and told news outlets “it would be disrespectful” to proceed in the shooting’s aftermath. Texas Governor Greg Abbott also backed out of plans for in-person remarks, opting instead to return to the site of the killings.

Yahoo Finance reached out to dozens of the businesses listed as attending, and none offered up plans to withdraw from the event after the shooting. 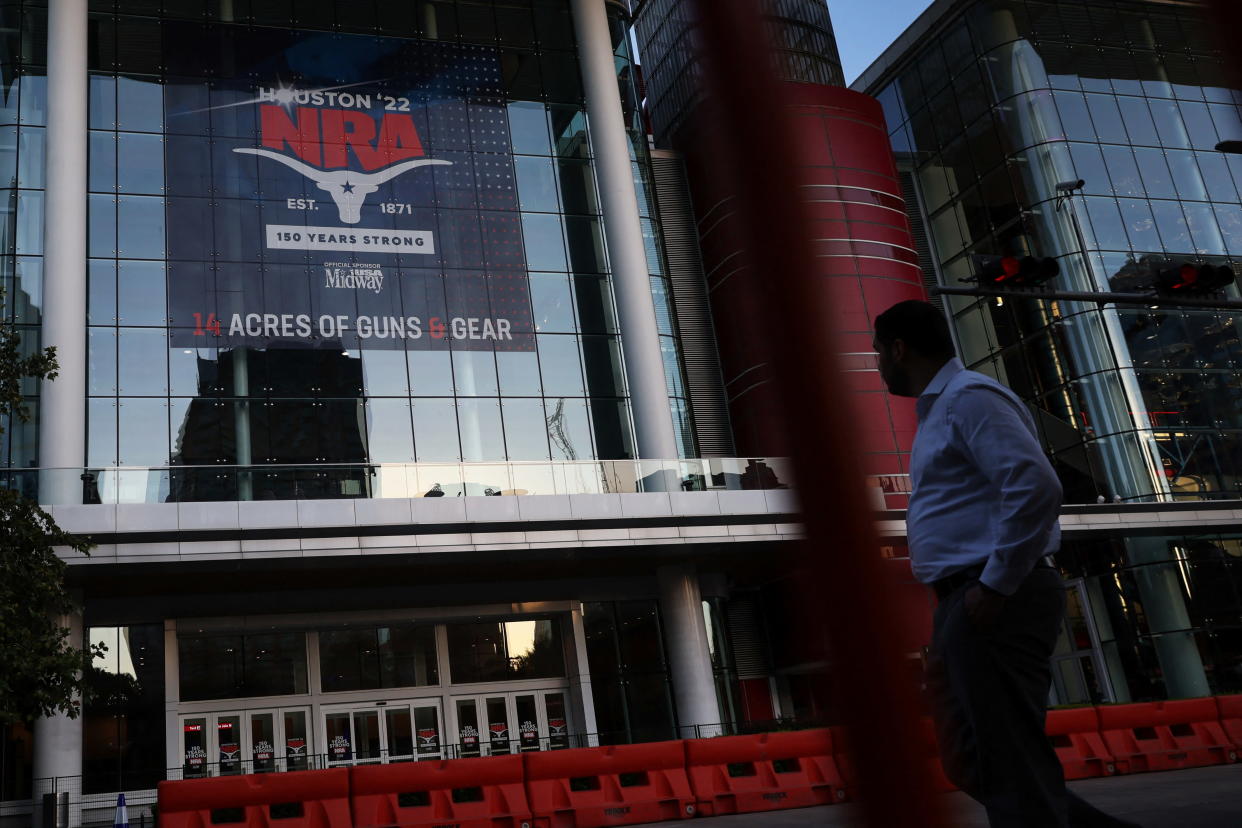 ‘[N]ot an expression of political opinion’

Leica Sport Optics is one example. The company is best known for cameras but also makes scopes for guns and binoculars for hunting. The company responded in a statement to Yahoo Finance by saying it doesn’t comment on politics. “Accordingly, participation in the NRA Show is not an expression of political opinion,” the company said. “Our focus is solely on the visitors who are interested in our sport optics products.”

Target Sports USA, which specializes in selling bulk ammunition online, will also participate. Its CEO, Miodrag Delmic, acknowledged that the convention “will certainly emphasize the need to work on mechanisms of firearm abuse prevention and mitigation of gun violence.”

As in the aftermath of other tragedies, gun stocks have seen gains in recent days as investors expect consumers to buy up the weapons in anticipation of increased regulation. 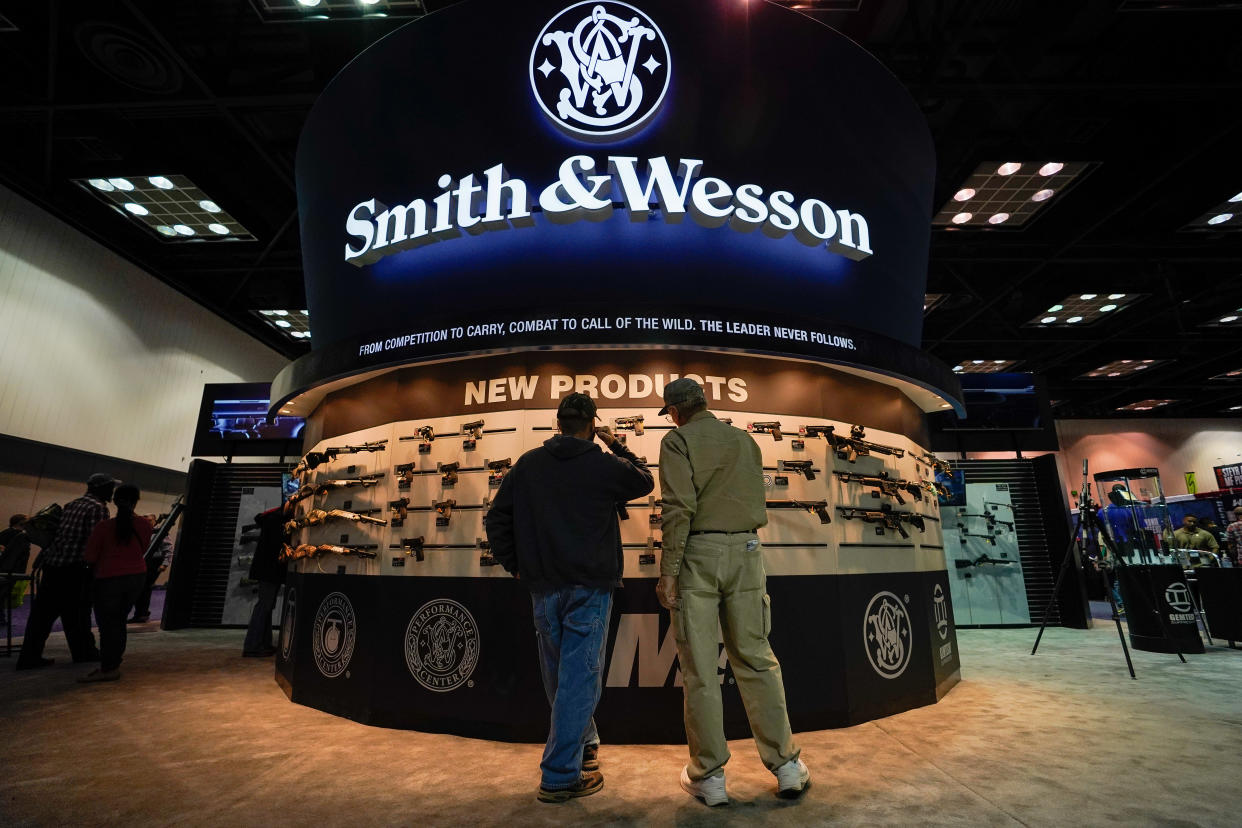 The massive exhibit is also set to include companies that aren’t directly involved in the gun industry but cater to a conservative audience.

Newsmax, the conservative channel closely aligned with Trump supporters, is listed as having a booth. In a statement, a spokesperson said “Newsmax will be covering the NRA national conference as a news event.” The company declined to respond to multiple follow-ups to clarify why it is listed among booth holders.

The Black Rifle Coffee Company (BRCC) is also listed as a participant. The so-called “Starbucks of the right” didn’t respond to requests for comment this week, but CEO Evan Hafer previously told Yahoo Finance Live that his customers “are hungry to go out and really experience a coffee company that represents their values.” Hafer joined again in February when his company went public via a SPAC merger and, pressed on the brand’s politics, said, “I don’t really pay attention to how others define my company.” 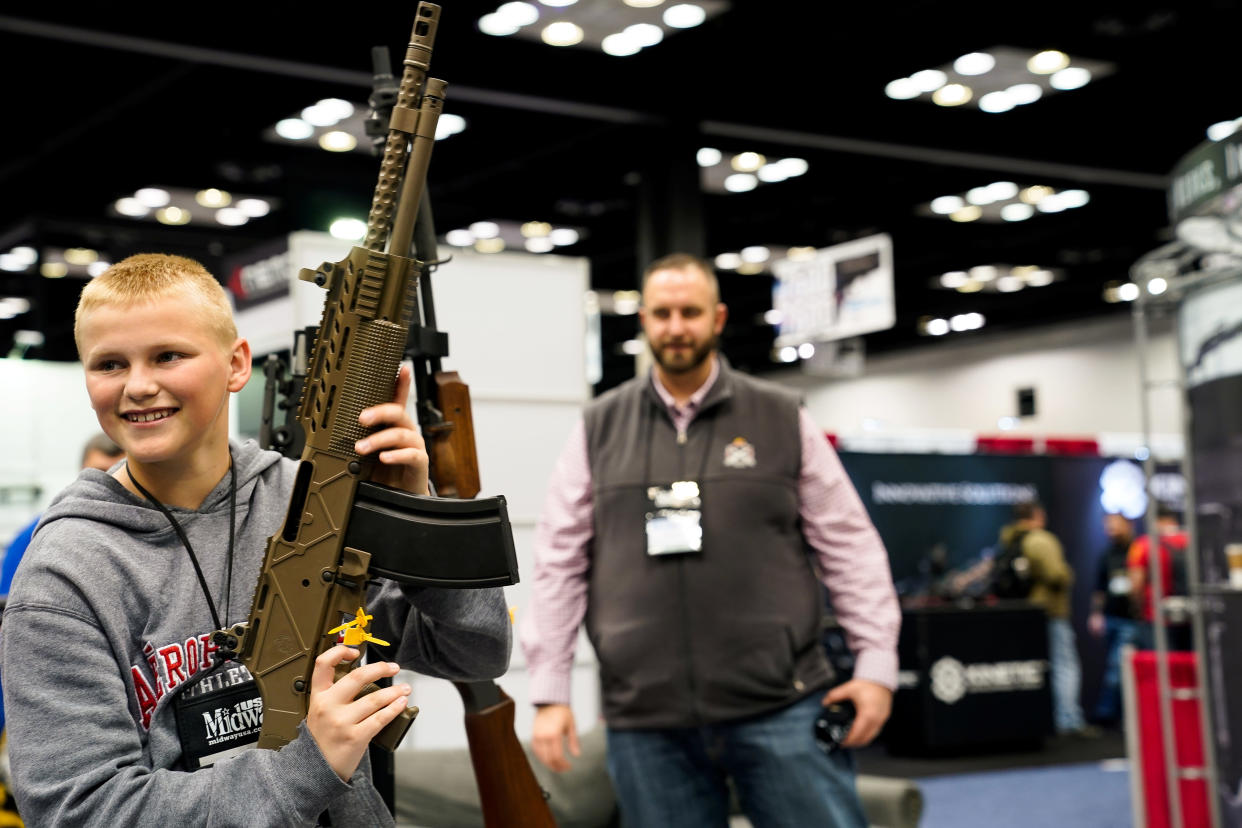 ‘The interests of the gun industry and the gun manufacturers’

Meanwhile, gun control advocates have slammed the NRA for going ahead with the conference. From the White House podium on Thursday, Press Secretary Karine Jean-Pierre said NRA leadership is “contributing to the problem of gun violence, not trying to solve it.”

“They represent the interests of the gun industry and the gun manufacturers who are marketing weapons of war to young adults,” she added.

Booths are reserved this weekend for companies of all sizes — including niche groups like the Scholastic Shooting Sports Foundation, which is involved in youth shooting programs, and Ragnarok Supply Co., which makes an exploding target called fruit nukes. Neither responded to multiple requests for comment.

In addition to Trump, other speakers apparently still scheduled include Texas Senator Ted Cruz and South Dakota Governor Kristi Noem. Two other GOP lawmakers — Sen. John Cornyn and Rep. Dan Crenshaw — withdrew from the event due to what their staffs said were scheduling issues. 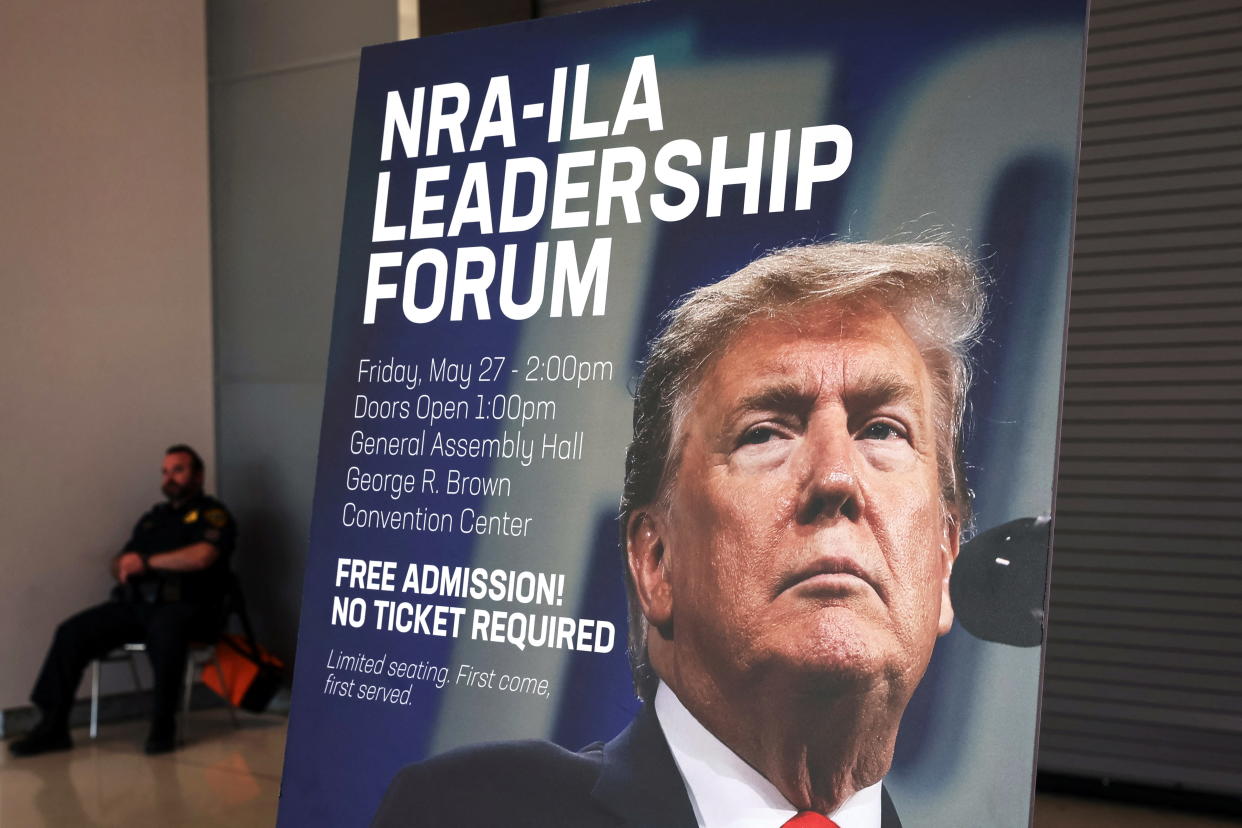 Cruz traveled to Uvalde this week and went viral after being confronted by a British journalist questioning why school shootings only happen in America.

Abbott visited as well and said “it is intolerable and it is unacceptable for us to have in this state anyone who would kill little kids in our school” and was also confronted by Beto O’Rourke, his opponent in elections this fall, for his dismissal of calls for stronger gun laws in the wake of the tragedy.

The atmosphere for Cruz is set to be largely friendlier in Houston where he’s speaking during the convention “leadership forum.” In a statement about its decision to go ahead with the overall conference, the NRA said that “[a]s we gather in Houston, we will reflect on these events, pray for the victims, recognize our patriotic members, and pledge to redouble our commitment to making our schools secure.”

Ben Werschkul is a writer and producer for Yahoo Finance in Washington, DC.