Singapore: As governor of West Java, Indonesia’s most populated province, Ridwan Kamil runs a territory with twice as many people as Australia.

Amid a devastating surge of COVID-19 over the past six weeks, he has taken matters into his own hands. 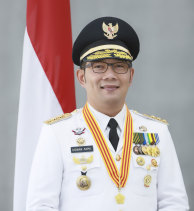 Ridwan Kamil became governor of West Java in 2018 and his term runs until 2023.

“The issue now is about people die because of a lack of oxygen supplies,” he told The Sydney Morning Herald and The Age in an interview from his office in the provincial capital Bandung.

“We are deficient around 200 tonnes [of oxygen] a day. So I use my own resources, my own network to supply oxygen. There is a [governor to governor] kind of network, but I cannot wait.”

Joko Widodo’s Indonesian government has sourced oxygen-related equipment from Singapore, China and Australia as the crisis deepens, as well as ordering industrial oxygen companies to direct all production to the medical sector.

But with West Java having a COVID-19 caseload that trails only Jakarta, and with vaccination levels there well behind the capital, its leader says he can’t simply rely on central government. 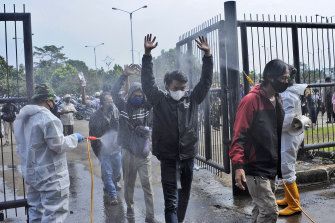 Soldiers in protective suits spray disinfectant on people entering a stadium in Bandung, West Java to receive the Sinovac vaccine.Credit:AP

Kamil has accessed oxygen cylinders from China and Singapore and also has a friend with good Australian contacts – former Indonesian ambassador to the United States Dino Patti Djalal – trying to secure reinforcements from the private sector in Australia.

He has done so as nationwide infections have spiked beyond 50,000 a day, leaving hospitals close to breaking point, and as the daily death toll has broken into four figures.

In West Java, authorities have sought to take pressure off hospitals and medical workers by prioritising telemedicine and by shifting recovering patients into apartments and hotels to make room.

Kamil has also abruptly called off a range of infrastructure projects worth a combined 140 billion rupiah ($13 million) to make free medication available to the infected.

With his province under partial lockdown, like much of the country, his immediate concern is trying to withstand the ravages of the Delta variant.

But he is also looking ahead. A renowned architect before he entered public office first as mayor of Bandung, in 2013, and then as governor three years ago, Kamil did not need a pandemic to tell him that Indonesia’s health system was in urgent need of redesign to be able to better care for its population of 270 million.

He has a long-term plan, in partnership with two Australian companies, to vastly expand facilities in his province to ensure it is more properly equipped for years ahead.

“My population is around 50 million, twice the size of Australia. But when I look, the ratio of our infrastructure is not good.”

Via a $1.3 billion joint venture between state-owned enterprise PT Jasa Sanara and Australia’s Docta and Aspen Medical, Kamil wants to build 23 new hospitals and 650 fixed and mobile healthcare clinics across West Java, with the ground to be broken on the first of them by the end of this year.

“My population is around 50 million, twice the size of Australia,” he said. “But when I look, the ratio of our infrastructure is not good. I’ve inherited not-so-good ratios for public health services.

“So while we are fighting off the virus since last year, we are preparing to have a more prepared future.”

Kamil, 49, has been cast as a possible presidential candidate for 2024, when the second of Joko’s two five-year terms comes to an end and Indonesia goes to the polls to elect a new leader. If Joko’s handling of COVID-19, which has been heavily criticised by public health experts, will be a legacy of his presidency, the West Java governor hopes his ambition to add 6000 hospital beds over the next two decades will set a standard for others to follow.

“This is the beginning but if we succeed, you can imagine [all the] provinces of Indonesia will follow the West Java model,” he said. “Because typical Indonesia … they wait and see. As a leader, I am also a risk-taker. So I said I cannot wait for others.”

The origins of the Australian private-public deal date back five years ago when Kamil met Docta founder Dr Andrew Rochford, a medical practitioner and television personality who was setting up telemedicine and mobile clinics in Indonesia, and told the Australian of his desire to greatly improve healthcare.

South-east Asia’s largest country has one hospital bed for every 4000 people — below the World Health Organisation benchmark of one for every 1000 and an inadequacy that has been sadly exposed since last month.

While the virus rages, the Australian-backed project is about trying to close that gap.

“As a country that is close to us, we have an opportunity to really strengthen not only their healthcare system, but the health security of the entire region,” Rochford said.

“I have my team [in Indonesia] that I’m very close with and I’ve spent a lot of time in Bandung and West Java, and the challenges that they’re facing … I find it hard to sit and watch.

“This isn’t something that’s going to disappear. But hopefully, there is the ability to help at some stage.“