Donald Trump has left Washington DC for the final time as President, choosing to head to Florida and skip President-elect Joe Biden's swearing-in ceremony at the Capitol.

“Have a good life, we’ll see you soon,” Trump said at the end of his speech to supporters at Joint Base Andrews. He then boarded Air Force One and took off as Frank Sinatra's My Way played over the loudspeakers. 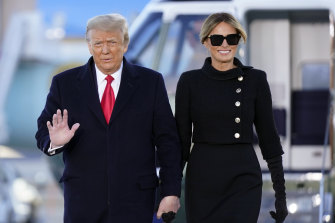 Earlier, Trump left the White House on a red carpet, hand in hand with Melania Trump, and boarded the Marine One helicopter for the short flight to Joint Base Andrews in suburban Maryland. He was met with a 21-gun salute shortly after landing.

In his short, unscripted remarks to the crowd, Trump thanked his family and vowed to "always fight".

“You are amazing people. This is a great, great country. It is my greatest honour and privilege to have been your President,” Trump said.

He listed what he considered to be the accomplishments of “not a regular administration,” including tax cuts, the appointment of three Supreme Court justices and the establishment of a new branch of the military, the Space Force. He also promised that he would be back “in some form”.

Trump wished the next administration "great luck," but he did not mention Biden by name.

What can we expect from Biden's inaugural address?

The inaugural address gives a new president a chance to lay out an agenda and vision with the country, and the world, watching.

Some of the best-known remarks from past presidents have been delivered during such an address, including former President John F. Kennedy's famous line: "Ask not what your country can do for you, ask what you can do for your country."

The details of Biden's speech are being kept tightly under wraps, but his inaugural team said the address would lay out his vision to "defeat the pandemic, build back better, and unify and heal the nation."

Below you can watch some of the presidential inaugurations throughout the years: 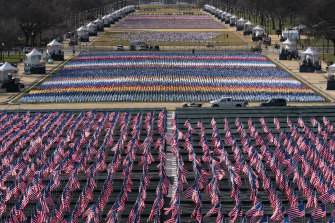 Flags have been placed on the National Mall, which has been closed to the public.Credit:AP

About 1000 guests are expected to attend the ceremony, the majority of whom will be members of Congress and their guests.

After he's sworn in, Biden will deliver his inaugural address.

Biden will then move to the Capitol's East Front for what is known as the Pass in Review, a long-standing tradition in which a new president assesses the military troops.

After that, Biden, Harris and former presidents Barack Obama, George W Bush and Bill Clinton, along with their spouses, will travel to Arlington National Cemetery to lay a wreath at the Tomb of the Unknown Soldier.

Biden will then receive a military escort, with every branch of the military represented, from 15th Street to the White House before an evening of virtual activities.

Good morning from here in the United States, and welcome to Inauguration Day.

Donald Trump's four-year presidency is set to come to an end at noon in Washington DC – 4am AEDT – when President-elect Joe Biden is sworn in as the 46th President of the United States in a ceremony unlike any other in recent memory. 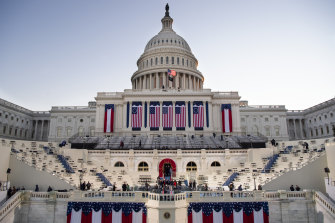 The sun rises behind the Capitol on Inauguration Day.Credit:AP

The coronavirus pandemic had already forced the ceremony to be scaled down and subdued. Then, the storming of the Capitol two weeks ago transformed Washington DC into a virtual fortress.

More than 25,000 National Guard troops are in the city, the Capitol is surrounded by fencing and, in an unprecedented move, the National Park Service has decided to temporarily close the National Mall to all spectators.

Some events will occur in a smaller and socially distanced form, while other celebratory components will be virtual.

Biden and Vice-President-elect Kamala Harris will take helm of a deeply divided nation and inherit a confluence of crises arguably greater than any faced by their predecessors.

Stick with us throughout the morning as we bring you the latest news as it happens.