Jill Biden introduces her virtual guests for Joe’s address to Congress – including a Dreamer, the first transgender teen to testify before Congress and a BLM activist who advocates for gun control

First lady Jill Biden introduced her ‘virtual’ guests for President Joe Biden’s first Congressional address Wednesday afternoon, when past guests would have been heading to the White House for a reception.

The five individuals included a Dreamer, the first transgender teen to testify before Congress, a BLM activist who advocates for gun control, a local educator and a tribal leader.

The guests are usually there to prove a point in the president’s speech – and they played a similar role this year, but presented Dr. Biden with remarks beforehand. 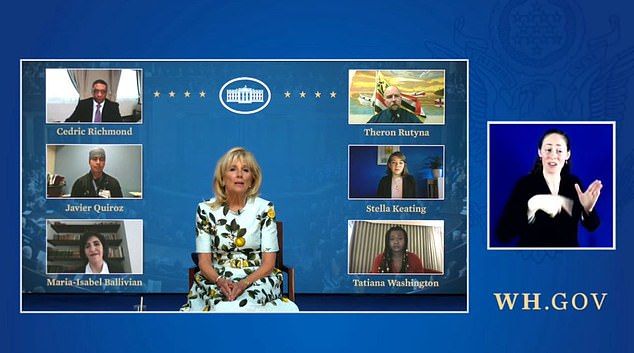 First lady Jill Biden hosted five virtual guests at an online event before President Joe Biden’s speech before Congress Wednesday night to make up for the nixed tradition of having a first lady’s box. Dr. Biden won’t have in-person guests due to COVID-19 protocols 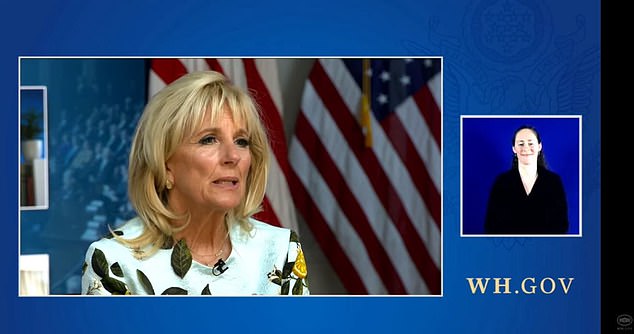 Dr. Jill Biden speaks to her guests in advance of President Joe Biden’s first joint address before Congress. Generally the guests would be used to make a point in the president’s speech. This year they played a similar role, but spoke to the first lady beforehand 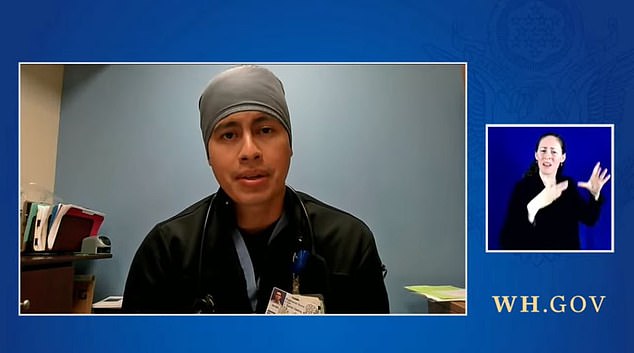 Javier Quiroz Castro, a ‘Dreamer’ who benefited from the Obama-era DACA program, talked about being a COVID-19 nurse for the past year, contracting COVID and then returning to the hospital to work with more COVID patients 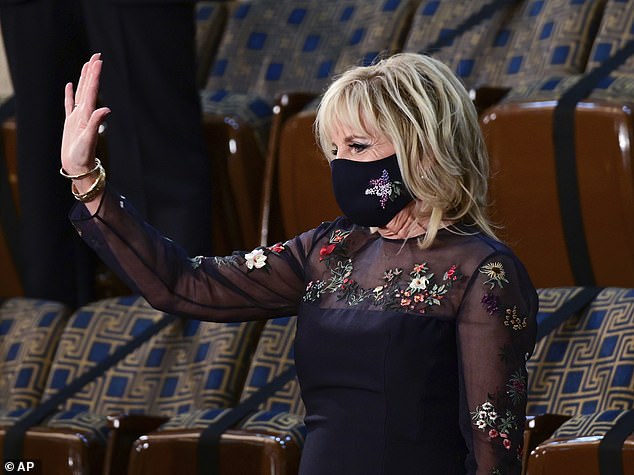 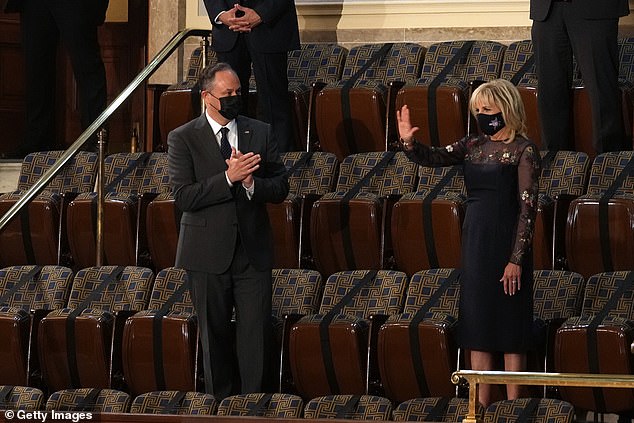 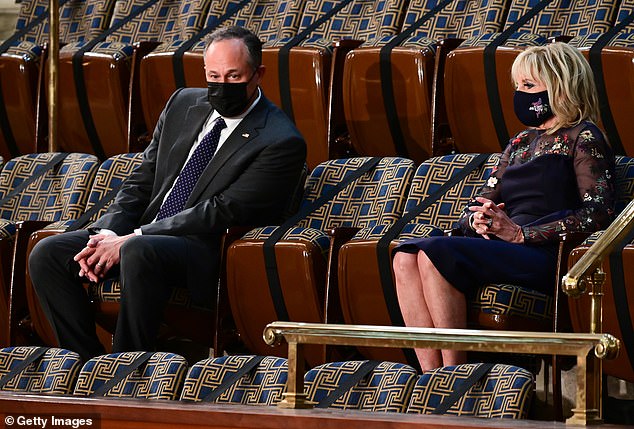 Emhoff, pictured with the first lady, is America’s first ever ‘second gentleman,’ and was seen blowing kisses to his wife as she appeared onstage

Javier Quiroz Castro is a so-called ‘Dreamer,’ coming to the U.S. from Mexico as a three-year-old and growing up undocumented.

Castro said he benefited from President Barack Obama’s DACA – Deferred Action for Childhood Arrivals – policy, which allowed him to get licensed as a nurse after his nursing school graduation.

The policy was put in jeopardy during President Donald Trump’s four years in office, but Biden is moving to safeguard the Dreamers, while also pushing Congress to pass the Dream Act.

Castro said for the past year he’s been treating COVID-19 patients at a top-tier facility in Houston, Texas.

He grew slightly emotional when the first lady asked how he’d been doing.

Castro first said it had been fine, but then admitted it’s been tough.

‘They asked us to step up and take care of COVID patients and we stepped up, we had to serve the community,’ he said. ‘I ended up catching COVID last year unfortunately. And I was out for like a month.’

‘But as soon as I felt good I came back to take care of COVID patients again and now I am, fast-forward to today, I’m fully vaccinated and I’m literally working right now,’ he continued.

‘I’m talking to you guys on my lunch break because there was no way I was going to miss this opportunity to speak with you,’ Castro said. 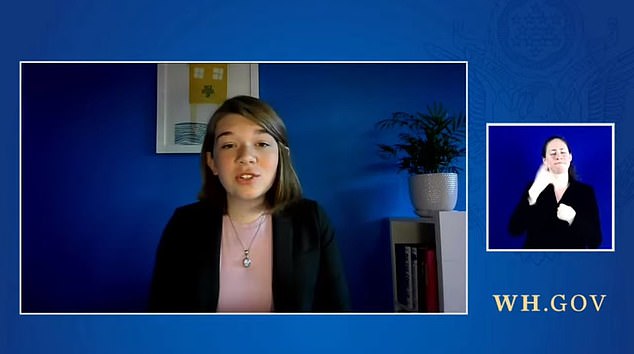 Stella Keating, a 16-year-old transgender activist from Tacoma, Washington, told Dr. Biden about her efforts to humanize transgender and non-binary people. Keating became the first transgender teenager to testify before the Senate, which she did last month

‘I’m so inspired by the president’s commitment to all LGBTQ+ Americans, including his support of the Equality Act,’ she told Dr. Biden. ‘I just can’t stop smiling.’

‘To hear President Biden say all human beings should be treated with respect and dignity and should be able to live without fear no matter who they are or whom they love told me that I am valued, that I matter and that I belong,’ she told the first lady. ‘This gives me hope and, more importantly, it gets me excited about my future.’

Keating talked about her work with the GenderCool project, which aims to humanize to other Americans transgender and non-binary people.

‘We know that when people have the chance to meet us, their opinions change,’ Keating said.  ‘I wanted our senators to know me as a person and I had no idea that I would be making history as the youngest transgender person to ever testify before the U.S. Senate.’

Keating testified about the Equality Act – which has passed in the House but not the Senate – before the Senate Judiciary Committee last month.

When it was Biden’s turn to speak again, she encouraged the teenager to run for office.

‘I love that you’re interested in politics and I hope you decide to run for office, because you know, politics is an honorable business and I think we have to lift up that whole idea,’ Biden said. ‘Because look at you, look at the change that you’re making.’

The first lady asked Keating for her parents to pop into the screen so she could deliver them a message too.

After a quick delay, Keating’s mother Lisa was visable in the frame.

‘You must be such a proud parent, congratulations,’ Biden told the mom. ‘You have an amazing daughter.’ 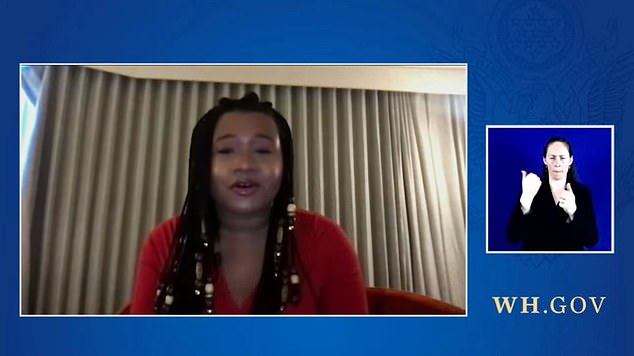 ‘March 11, 2017 is a day I will never forget,’ she told the first lady. ‘It is the day I lost my aunt Sharda in a murder-suicide at the hands of her husband, a Milwaukee police officer.’

It is also the day my little cousins lost their parents, not to mention witnessed this horiffic act,’ Washington added.

Washington, a 20-year-old from Milwaukee who’s been involved in Wisconsin’s Black Lives Matter movement, told Biden that ‘gun violence, domestic violence and police violence are all interconnected and tied back to our nation’s history and culture of violence and marginalization.’

‘We have to reimagine what public safety looks like and work as a collective to transform our communities,’ she encouraged.

Washington said she’s been lobbying Congress so that this money stays in the final package. 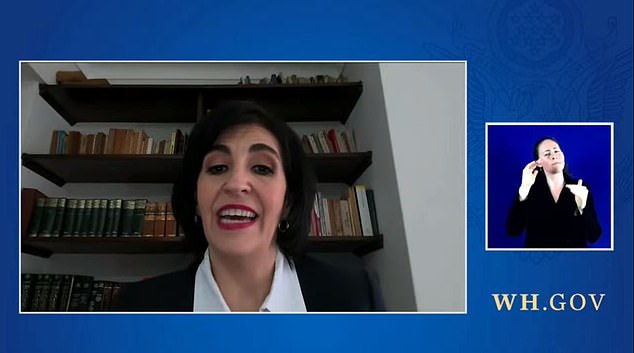 Educator Maria-Isabel Ballivian, whose Northern Virginia early child development center is near the community college where Biden teaches, talked about the importance of early child education and how her facility made it through the pandemic

She made a pitch for early childhood education and talked about how her center stayed afloat during the pandemic.

Ballivian said one thing they did was get a Paycheck Protection Program loan – which was launched during the last administration – and benefited from the help of hundreds of volunteers, as those who needed childcare included first responders and frontline workers.

‘In short, we took a all hands on deck approach thinking outside of the box an dit worked,’ she said. ‘None of these would be achieved without the administration’s efforts.’ 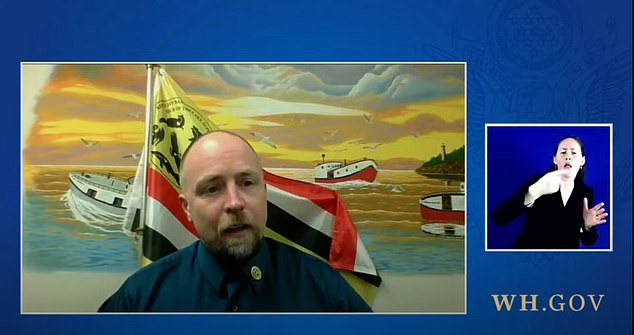 Biden’s final guest, Theron Rutyna, heralds from the Red Cliff Band of Lake Superior Chippewa, and has been leading an effort to get better broadband brought to reservations locally in Wisconsin and also across the U.S.

‘When the pandemic hit, there was no broadband here on the reservation that could support Zoom meetings or tele-health or anything to do with a child’s education,’ Rutyna told the first lady.

He spoke about the importance of the broadband components in Biden’s proposed American Jobs Plan, which lawmakers are currently hashing out on Capitol Hill.

‘Being able to bury fiber is a luxury,’ he said of the process of bringing high-speed internet to the community.

‘We need to bring htis broadband foward to not only the Native American reservations in Indian Country, but to all the rural people, so that when you sit down in Northern Kentucky, Northern California or Northern Wisconsin you can get on a Zoom meeting, you can get on with your family, you can see your friends and you can be safe during the pandemic,’ Rutyna said.