EXCLUSIVE: ‘KGB spies’ stole identities of a three-month-old boy who choked on his own vomit and three-week-old girl who died of birth defect as her father, 91, says it has brought back ‘really sad memories’

A heartbroken father whose dead daughter’s identity was stolen by a couple accused of being KGB spies has blasted them, saying ‘shame on you’.

Walter Glenn Primrose and Gwynne Darle Morrison have both been arrested on suspicion of stealing the identities of infants Bobby Edward Fort and Julie Lyn Montague.

The tots were just two months and two weeks old when they died, but the couple, both in their 60s, allegedly used their names for decades according to federal court records unsealed in Honolulu.

Primrose and Morrison both obtained false passports, driving licenses and Defense Department credentials after taking the infants identities and using them as their own.

Old photos show the couple posing as they wear KGB uniforms, which their lawyer claims is a ‘joke’, as prosecutors are seeking to have the couple held without bail.

Primrose was able to get security clearance with the USE Coast Guard using three-month-old Fort and three-week old Montague’s birth certificate.

John Montague, 91, did not even get to meet little Julie Lyn as she was so sick when she was born in 1968 he and his wife were unable to take her home in Dallas, Texas.

Speaking to the DailyMail.com, Montague said: ‘When I heard about it all it was a shock to me. It was sad too that someone would use a little deceased baby’s name like that, after all these years. 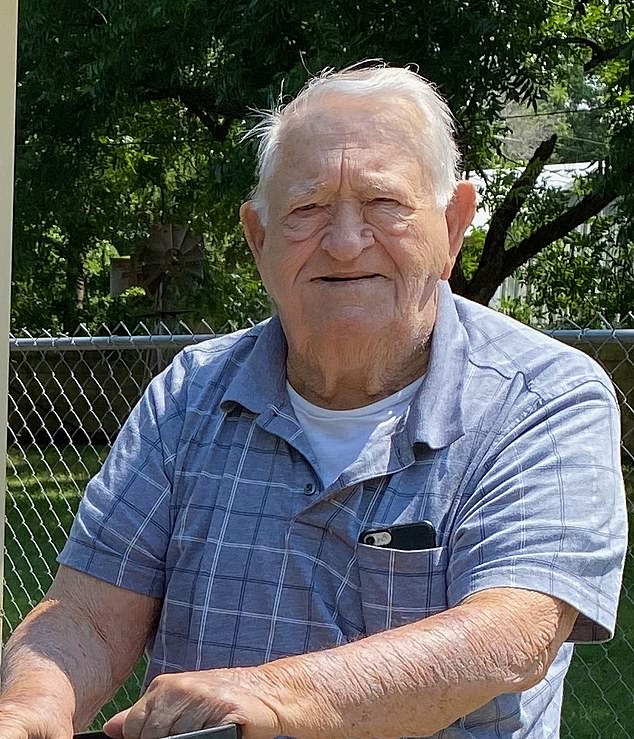 John Montague, 91, pictured, did not even get to meet little Julie Lyn as she was so sick when she was born in 1968 he and his wife were unable to take her home in Dallas, Texas. His wife passed away in 2003, but he said that she would be upset to hear the news about their daughter 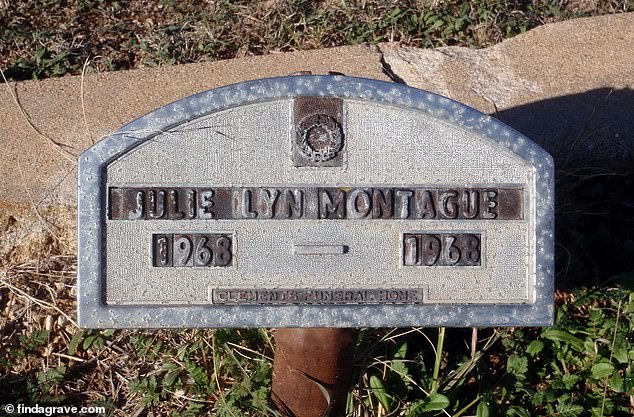 Gwynne Darle Morrison used the identity of Julie Lyn Montague, who died aged three weeks after being born with a birth defect in Burnet, Texas. Her father John said the case had brought back ‘sad memories’ for the family and that they were all ‘shocked’ at the development 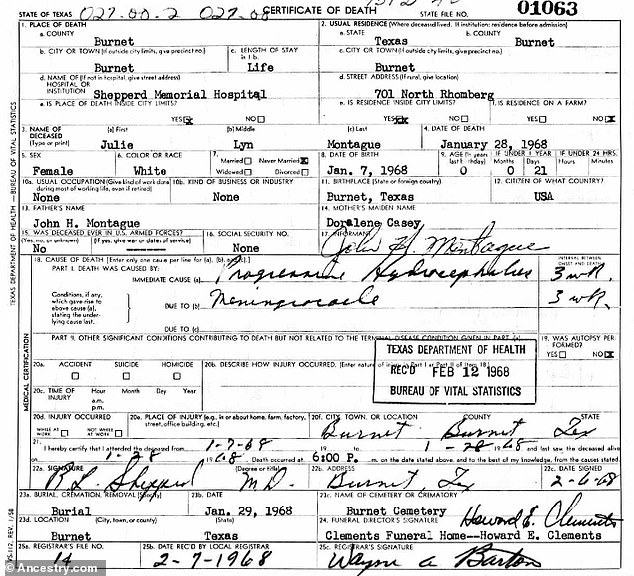 Little Julie Lyn was born with a birth defect, and her parents were unable to hold her or even take her home. Her sister Tonda said ‘it feels like an invasion of your personal emotions’ 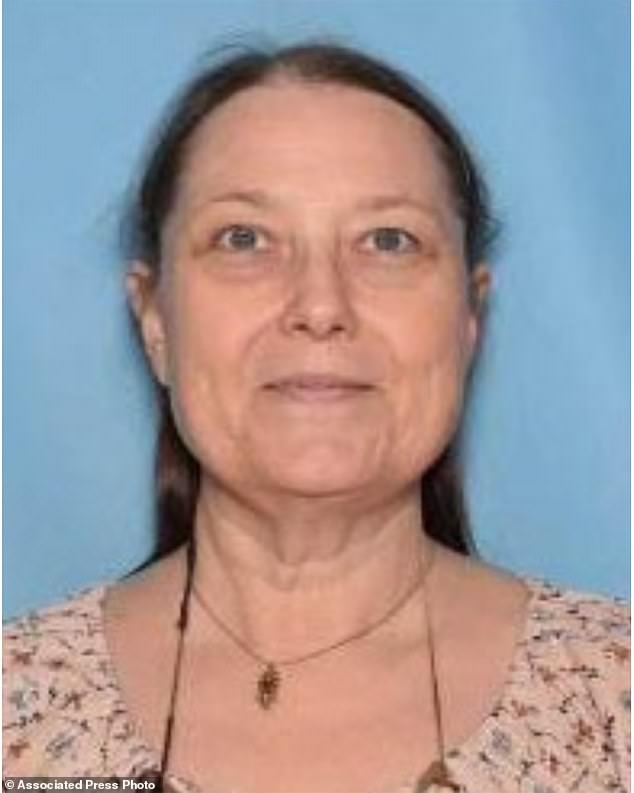 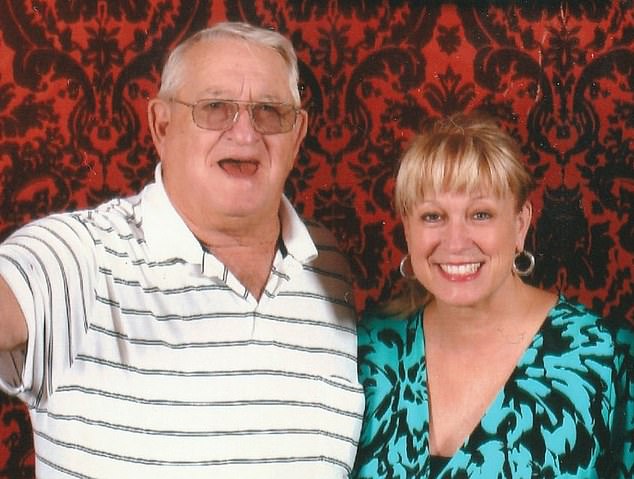 Julie sister Tonda, pictured with dad John, was devastated when she found out that her name had been used by the couple. She said ‘for somebody to steal her name and use it, in an evil way, I just can’t imagine what kind of human would do something like that’

‘My wife died in 2003, but she would have been upset about this whole thing too. My whole family is just in shock.

‘I haven’t heard anything from the police or FBI, the first I heard about it was a reported asking me about my daughter.

‘Julie Lyn only lived for two weeks. It brings back really sad memories, it was hard on us when we lost her and it’s been 54 years.

‘My wife and I never got to see her, she was in the hospital, and we never even brought her home.

‘Doctors said that she had a bad birth defect and that she wasn’t going to live. We buried her and we had three other children together.

‘I guess she’s been using her name for a really long time. It’s odd, none of us have any idea how she got the name other than going to the cemetery.

‘I guess what I would say to the woman is shame on her, for doing that. I told my other children and they’re shocked about this.

‘It’s sad to take anyone’s name. It scares you to think about what people are up to when they are using assumed names. You don’t know who they are or what they’re doing.

‘We had no idea it was going on, it’s shocked and scared me. I couldn’t believe it when I found out I thought it was a bad dream.

‘I can’t understand why she took her name out of all the ones in the cemetery.’

Bobby Edward Fort died in October 1967, just two months and twenty days after he was born, and was buried just 14 miles from Montague in Texas.

Montague passed away in January 1968, and was born in Shepperd’s Memorial Hospital – the same as Fort – and is buried in Burnet, Texas, where the family lived at the time.

Her sister, Tonda Ferguson, was just eight years old when her sister died, and said that she was ‘dumbfounded’ by the whole situation.

Tonda, 68, told DailyMail.com: ‘It’s horrible. We didn’t know anything about it until my dad called us.

‘It’s so surreal. I think dad and I are just totally caught of guard, dumbfounded by the whole thing trying to think of a way to describe it. 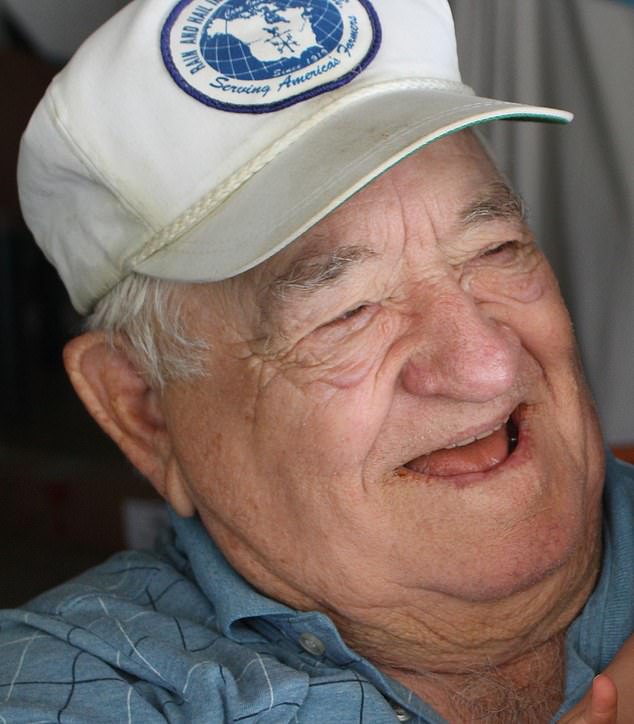 Primrose was able to get security clearance with the USE Coast Guard using three-month-old Fort and three-week old Montague’s birth certificate. Little Julie’s family have said the couple should feel ‘shame’ for using their names in that way 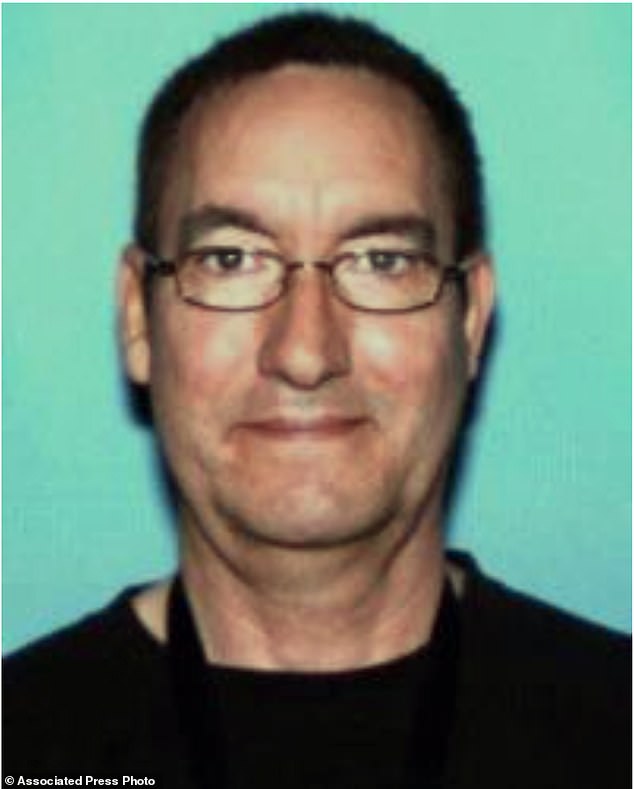 Walter Glenn Primose, pictured, was also known as Bobby Edward Fort. He enlisted in the Coast Guard in 1994 as Fort, despite there being more than a decade between their ages 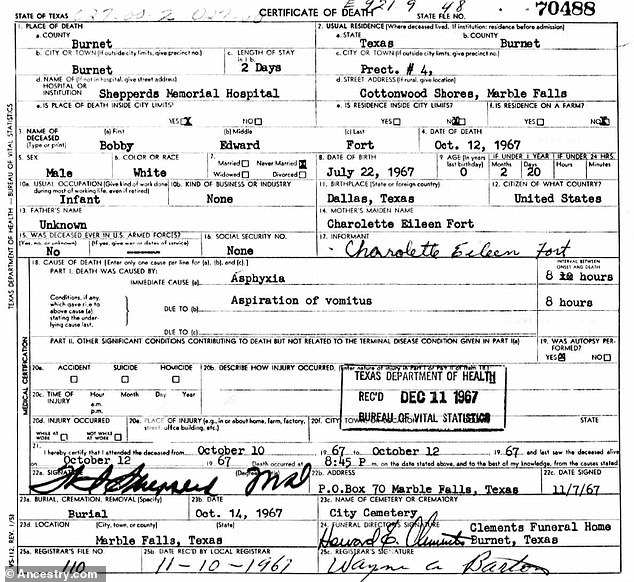 Bobby Edward Fort died in October 1967, just two months and twenty days after he was born, and was buried just 14 miles from Montague in Texas 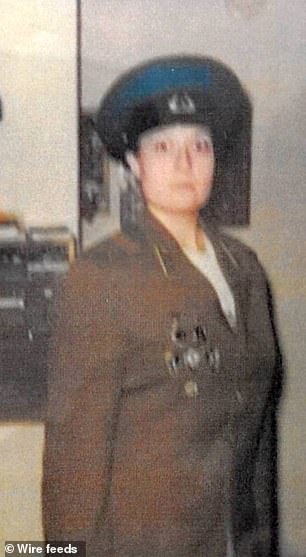 Walter Glenn Primose, right , and his wife Gwynn Darle Morrison, left, purportedly posed while wearing jackets worn by the KGB, the former Russian spy agency. However their attorney has claimed that the pictures were a ‘joke’

‘It feels like an invasion of your personal emotions. My sister was born 54 years ago and she only lived three weeks and we never got to hold her.

‘But I’m really very proud that today she knows she has a big sister and a wonderful father standing up for her and protecting her.

‘My sweet sister came from a place of love and for somebody to steal her name and use it, in an evil way and not the right way. I just can’t imagine what kind of human would do something like that.

‘I’m shocked and saddened. Let that sweet baby rest in peace. My heart breaks for the mother of the other baby as well.’

Primrose and Gwynn Darle Morrison were arrested on Friday in Kapolei on the island of Oahu, with a ‘close associate’ claiming that Morrison lived in Romania while it was a Soviet bloc country.

Assistant US Attorney Thomas Muehleck believes that there is a high risk the couple would flee if free.

They also suggested that Primrose, who was an avionics electrical technician in the Coast Guard, was highly skilled to communicate secretly if released.

Morrison’s attorney Megan Kau told The Associated Press, that the couple have lived law-abiding lives for three decades even if they used new identities.

She added that her client never lived in Romania and that she and Primrose tried the same jacket on as a joke and posed for photos in it.

Kau said: ‘She wants everyone to know she’s not a spy. This has all been blown way out of proportion. It’s government overreaching.’ 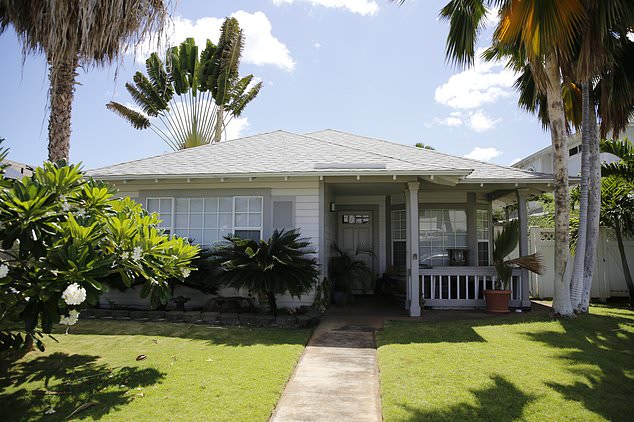 The home where U.S. defense contractor Walter Glenn Primrose and his wife, Gwynn Darlle Morrison, lived for years allegedly under aliases is pictured in Kapolei, Hawaii 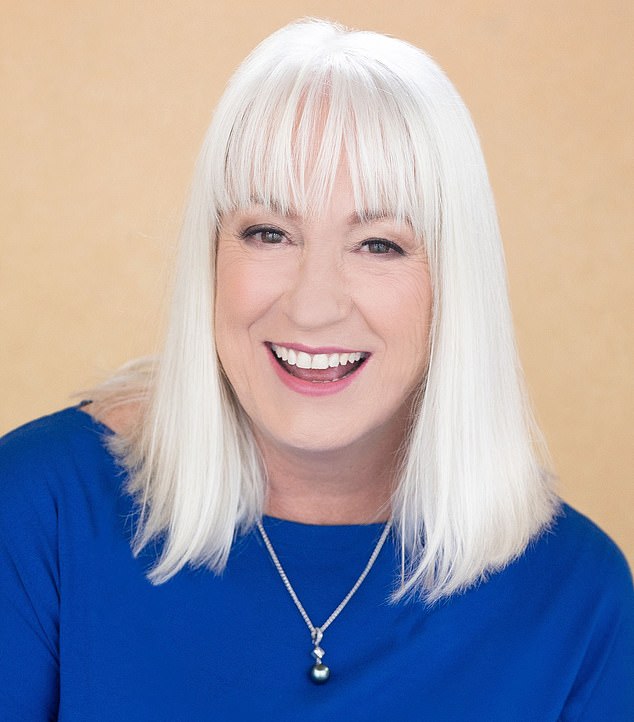 The tots were just two months and two weeks old when they died, but the couple, both in their 60s, allegedly used their names for decades according to federal court records unsealed in Honolulu. Julie’s sister Tonda, pictured, said that her ‘heart breaks’ for the family of baby Bobby 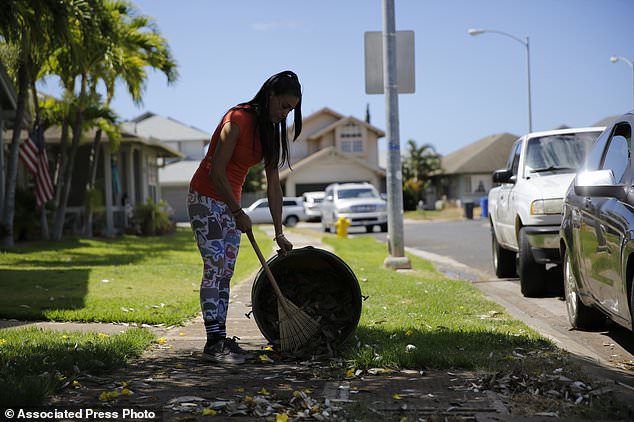 Mai Ly Schara, the neighbor of U.S. defense contractor Walter Glenn Primrose and his wife, Gwynn Darlle Morrison said that when the FBI showed up it was ‘crazy’ 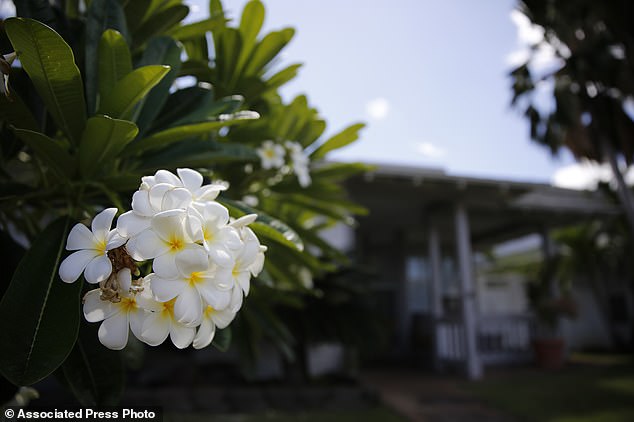 They married in 1980, and there is no indication in the court papers as to why the couple assumed the identities of the deceased children in 1987. Both have been charged with conspiracy to commit an offense against the US, false statement in passport application and aggravated identity theft

Primrose and Morrison were born in 1955 and they attended high school together in Port Lavaca, Texas, before going to Stephen F. Austin University, according to court records.

They married in 1980, and there is no indication in the court papers as to why the couple assumed the identities of the deceased children in 1987.

An affidavit filed by Special Agent Dennis Thomas of the State Department’s Diplomatic Security Service noted that the couple lost their home in Nacogdoches, Texas, to foreclosure that year.

They remarried under their assumed names in 1988, and Primrose, aged 39, then enlisted in the Coast Guard in 1994 as Fort, who would have been about 27.

The couple used the identities of the tots, who would have been more than a decade younger than them, to get multiple passports under their names.

Primrose was in the service until 2016, when he began work for an unnamed defense contractor at the US Coast Guard Air station at Barbers Point.

The court document claims: ‘While he held that secret clearance with the US Coast Guard, defendant Primrose was required to report any foreign travel.

‘Investigation has revealed that defendant Primrose did not report several trips to Canada while he did report other foreign travel.’

But in 1999 Primrose also applied for and was issued a passport under his legal name while also holding a passport in Fort’s name.

The couple lived in a Honolulu suburb in a modest two-bedroom bungalow beneath palm trees.

Neighbour Mai Ly Schara said the couple, who she knew as Bob and Lynn, owned a neighboring house they rented to military personnel.

She said: ‘They kept to themselves, but they were friendly. They just kind of were, like, a little nerdy.’

The FBI created a scene in the quiet neighborhood when they searched the house and took photos.

‘It was just shocking, like, oh my gosh,’ Schara said. ‘It was pretty crazy.’

The couple is charged with conspiracy to commit an offense against the US, false statement in passport application and aggravated identity theft.

The State Department declined to comment on the arrests.