Rishi Sunak is under pressure from landlords to bulk up financial support for pubs in next week’s Budget to stop more venues going to the wall.

The Campaign for Pubs, which claims to represent thousands of ordinary publicans, has written an open letter to the Chancellor laying out an extensive wish-list.

Demands include a 12-month extension to the 5 per cent reduced VAT rate and for Bounce Back loan repayments to be halved.

Despite unprecedented public spending to prop up hard-hit businesses, the group accuses ministers of ‘not properly or adequately’ supporting pubs during the crisis.

The letter says: ‘Unless the UK Government urgently provides adequate – meaning greater – support for pubs now, then pubs that have survived centuries and two world wars are at risk of permanent closure.’ 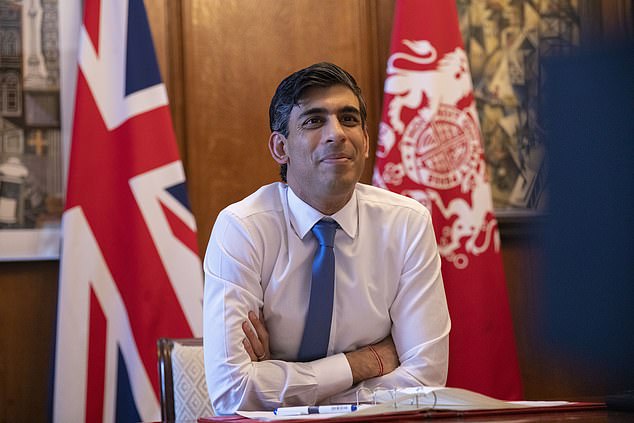 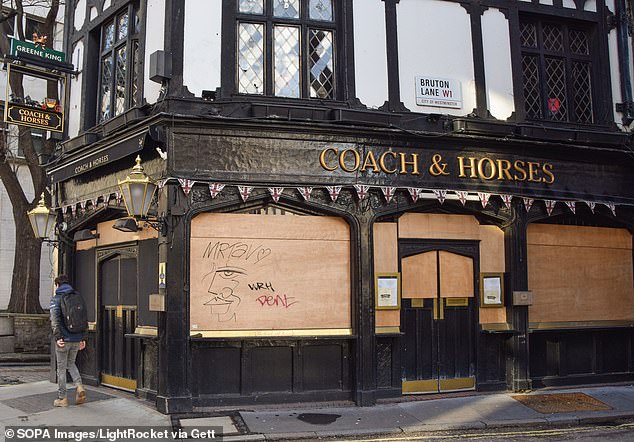 Hospitality is among the sectors to have borne the brunt of successive lockdowns and has spent the past year either grappling with Covid restrictions or shut entirely. Pictured: Boarded up Coach & Horses pub in Central London

Hospitality is among the sectors to have borne the brunt of successive lockdowns and has spent the past year either grappling with Covid restrictions or shut entirely.

A blizzard of loans, grants and furlough payments has failed to prevent scores of pubs from permanent closure, prompting calls for even more support.

Among a list of proposals to ease the strain on pubs as they prepare to reopen is that the Chancellor waives 50 per cent of all Bounce Back loan repayments.

The scheme allows small and medium-sized business to borrow up to 25 per cent of their turnover to a maximum of £50,000.

But the Campaign for Pubs says that many landlords took advantage of these loans last year under the impression that lockdown would only be short term.

‘Now they cannot pay these back (on top of other debts, especially rent debts) due to losing many months more trade,’ the letter states.

The group also urges Mr Sunak to carry on the reduced VAT rate of 5 per cent on hospitality sales for 12 months – and go further so that it also covers wet-led pubs.

In July the Chancellor slashed VAT for food and non-alcoholic drinks from 20 per cent, to last until March. 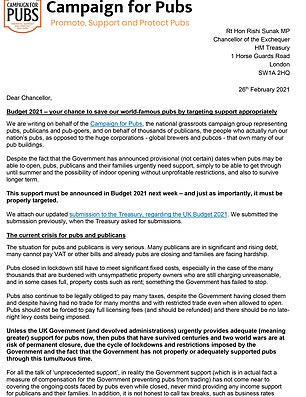 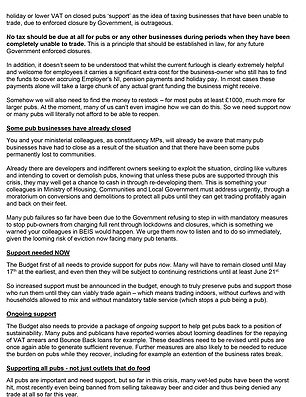 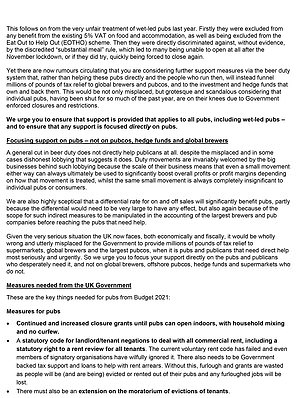 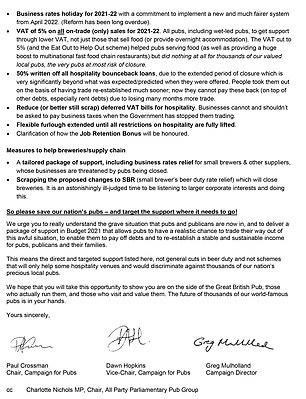 The Campaign for Pubs, which claims to represent thousands of ordinary publicans, has written an open letter to the Chancellor laying out an extensive wish-list

Boris Johnson’s road map to lift lockdown by June 21 earmarks pubs to reopen for outdoor service on April 12, before indoor service is allowed on May 17.

He assured landlords that trade not be hamstrung by the 10pm curfew and complex rules.

Earlier this week the PM said: ‘There will be no curfew and the Scotch egg debate will be over because there will be no requirement for alcohol to be served with a substantial meal.’

Wednesday’s Budget will outline the Treasury’s tax and spend plans as the UK starts to emerge from lockdown.

Government borrowing this financial year has hit £270.6billion – a reflection of the unprecedented peacetime spending to mitigate the economic harm of lockdown.

Mr Johnson has said ministers ‘will not pull the rug out’ and, although Mr Sunak is expected to brace the nation for tax rises to reduce the enormous debt burden, there will likely be continued support in the form of furlough and financial aid.

Alastair Kerr, South West Regional Representative, from the Campaign for Pubs, told MailOnline: ‘The situation that many publicans are facing is incredibly serious, with many publicans facing an economic catastrophe.

‘Traditional, community pubs such as ‘wet led’ pubs were excluded from support packages, such as the VAT cut on food sales, now is the time for all pubs to be supported.

‘We urge the Chancellor to act now, to offer increased support, so that our beloved pubs can trade for the coming months and years ahead.’