DES MOINES — Dale Weeks’ family believes he was an indirect victim of the COVID-19 pandemic.

The retired Iowa school superintendent died in late November, nearly a month after he was diagnosed with sepsis, a dangerous, blood-borne infection unrelated to the coronavirus.

His daughters think he might have survived if he’d been admitted immediately to a large medical center, where he could have received advanced testing and prompt surgery.

But he stayed for 15 days at Newton’s relatively small hospital because the bigger Iowa facilities said they couldn’t spare a bed for him, his family says. Iowa’s short-staffed hospitals have been jammed for months with patients, including people severely sickened by COVID-19.

“It’s infuriating that people who are not vaccinated are clogging it up,” said Jenifer Owenson of Des Moines, who is one of Weeks’ four children.

Weeks lived in the southern Iowa town of Seymour. When he began feeling ill, he thought it might be a side effect of a flu shot and a booster shot of coronavirus vaccine. On the night of Nov. 1, he went to the hospital in nearby Centerville, where staff determined he had sepsis. “They told my dad and his wife right away they had no beds,” Owenson said.

The staff called around for hours, seeking an open hospital bed. At first, the closest one they could find was in Illinois. Then, by midday the next day, they found a spot at the MercyOne hospital in Newton, 80 miles north of Centerville. He was taken there by ambulance. 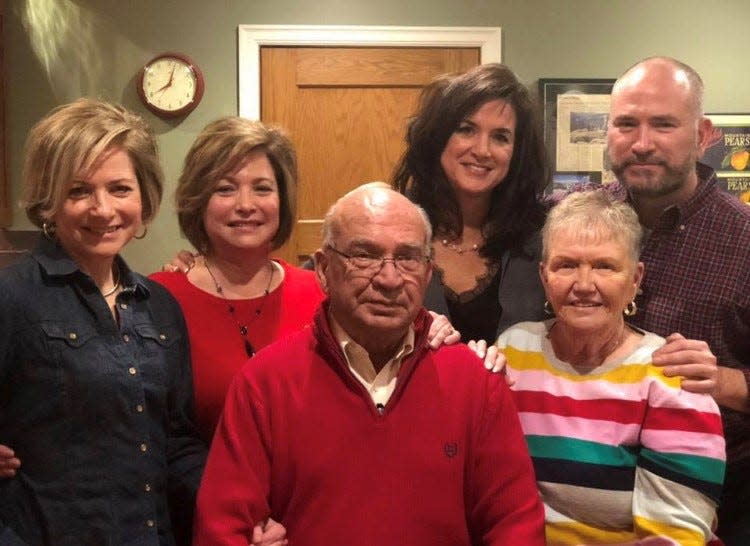 Owenson said the Newton hospital's staff did the best they could for her father, including giving him intravenous antibiotics. But when his infection failed to resolve, the family repeatedly asked if he could be transferred to a more advanced hospital. “We kept being told he was on a ‘list of degrees of severity,’ and his number had not come up,” she said.

He was aware of the situation, she said. “He was extremely frustrated. He was like, ‘Why can’t something be done?’”

On Nov. 17, after 15 days, he was taken to the University of Iowa Hospitals by ambulance. Doctors there determined on Nov. 25 that he needed surgery to clear out a severe infection of an artery near his stomach, where years earlier he’d had a stent installed to repair an aneurysm.

“They said he really had no choice. He needed to have this surgery, or he would die in a few days,” said Owenson's twin sister, Julia Simanski of Ankeny.

The Nov. 26 surgery lasted 17 hours, but Weeks continued to struggle, his daughters said. A surgeon told the family it was one of the worst infections she’d ever seen, they said. A second, shorter operation didn’t reverse his decline. His kidneys and intestines were failing. He died Nov. 28 at age 78.

Representatives of the hospitals declined to comment on Weeks’ case, but they acknowledged the frustration caused by hospital crowding.

“In addition to an increased number of COVID-19 cases and spread of the delta and omicron variants, hospitals across the country are dealing with traumas and experiencing multiple types of illness,” MercyOne spokesperson Marcy Peterson wrote in an email to the Des Moines Register. “This demand is coupled with a reduced number of staff to care for patients. These challenges can strain available resources and contribute to delays in care or other complications for patients.”

She noted that unvaccinated people make up a large percentage of hospitalized COVID-19 patients.

COVID vaccine testing in kids: This Latina doctor wanted to spark trust in the COVID vaccines. So, she enrolled her babies in a clinical trial.

Laura Shoemaker, a spokesperson for the University of Iowa Hospitals, said her facility is often close to full.

“Even prior to the pandemic, it was not uncommon for us to operate at 90-95% capacity on average,” she wrote in an email to the Des Moines Register. “For perspective, we have 860 beds and as of today we have 780 inpatients. That number goes up and down continuously by the hour as patients are discharged and new patients are admitted.”

She noted that to address such crowding, the University of Iowa recently gained approval to build an additional hospital.

Weeks was a husband, father, grandfather and great-grandfather. He was a former math and science teacher and principal who served as schools superintendent in the Mingo, Woodward-Granger and Seymour districts before retiring in 2007.

“He will be remembered by many as a kind, loyal, and humble person,” his family wrote in his obituary. “He could be counted on to offer help, say ‘yes’ to a request for a favor, and assume the best in others.”

His family will never know whether the pandemic indirectly shortened his life. They understand he might have died even if he’d been admitted immediately to a large medical center. Still, Simanski said, “I think it would have given us a fairer chance.”