Migrants pelt Polish border guards with rocks and tear gas cannisters as over 500 ‘bussed in by Belarussians’ try to storm border again, while Putin and Lukashenko tell the EU it needs to co-operate with Minsk

Poland arrested 45 migrants overnight after another attempt to cross the border from Belarus during which guards were pelted with rocks and tear gas cannisters.

Warsaw said Belarusian authorities led an operation involving two groups of more than 500 migrants where they were seen bringing people to the border in trucks.

Belarusian border officials were seen helping the migrants try to cross into Poland on Thursday night after camps near Bruzgi, Belarus, were cleared.

Poland also accused the Belarusian agents of trying to blind the Polish soldiers with their lasers to distract them.

It is just the latest flashpoint in what have become day-and-night raids by migrants attempting to get into the EU, and comes as British engineers are deployed to help reinforce the border defences.

European ministers accuse dictator Alexander Lukashenko of manufacturing the crisis in an attempt to fracture the alliance, as revenge for sanctions on his regime.

But Russian President Vladimir Putin and Lukashenko have hit back and said the EU needs to co-operate with Minsk. 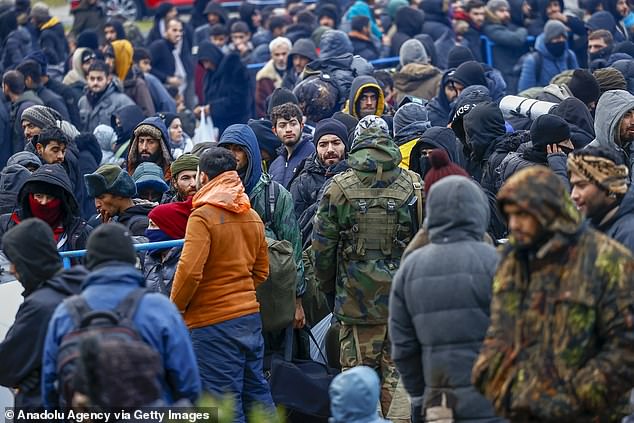 Poland arrested 45 migrants overnight after another attempt to cross the border from Belarus during which guards were pelted with rocks and tear gas cannisters. Pictured: Migrants at the Polish/Belarusian border on Thursday 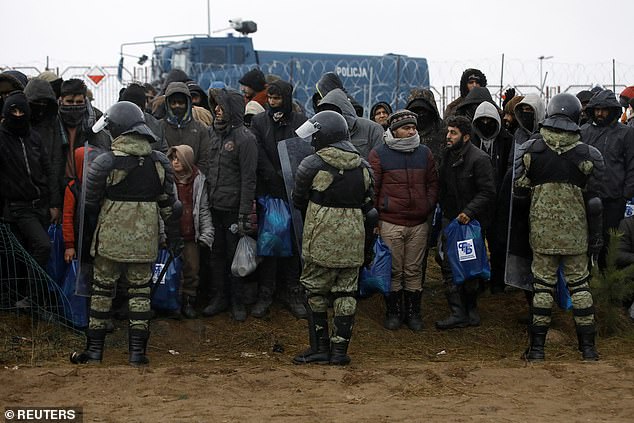 Belarus law enforcement officers guard migrants in a camp near Bruzgi-Kuznica checkpoint on the Belarusian-Polish border in the Grodno region, Belarus, on Tuesday 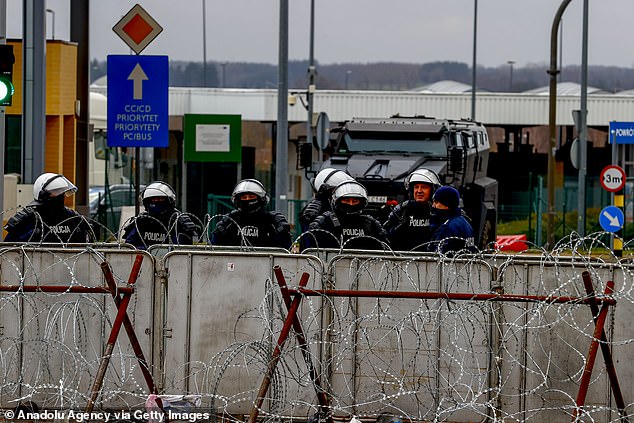 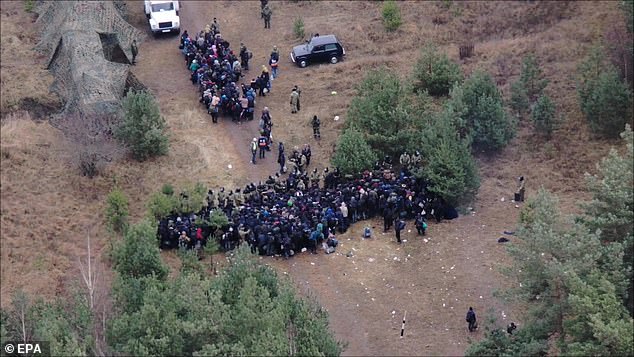 Migrants at a camp near the Polish-Belarusian border crossing in Kuznica Bialostocka-Bruzgi, Belarus on Thursday

The Polish Border Guard said there were 255 attempts to cross the border on Thursday, including two large groups consisting of 550 migrants, after makeshift camps were cleared.

Four Polish soldiers were injured after the migrants threw tear gas cannisters and rocks at the them.

‘People in the largest group of around 500 threw rocks and someone also hurled tear gas at Polish officials. At the same time the Belarusian personnel were using lasers to blind them,’ Polish border guard spokeswoman Anna Michalska said.

She added that Belarusian authorities were seen helping the migrants try to cross into Poland by bringing them to the border in trucks.

‘(The Belarusians) were bringing more migrants to the place where there was a forced attempt to cross. At the start there were 100 people, but then the Belarusian side brought more people in trucks. Then there were 500 people,’ Michalska said.

‘Forty-five people were detained and ordered to leave Poland. The Belarusian side is supplying the migrants with the tear gas, it’s obvious they didn’t bring it from their countries of origin,’ Michalska added.

She said four Polish soldiers had sustained injuries that did not require hospitalisation.

Belarusian state news agency Belta said 2,000 migrants who had been camped out in freezing conditions on the border spent the night in a nearby warehouse after clearing out of their camp.

Belta published photos of the migrants, including young children, lying on mats in the facility and wrote that ‘for several it was their first warm night’. 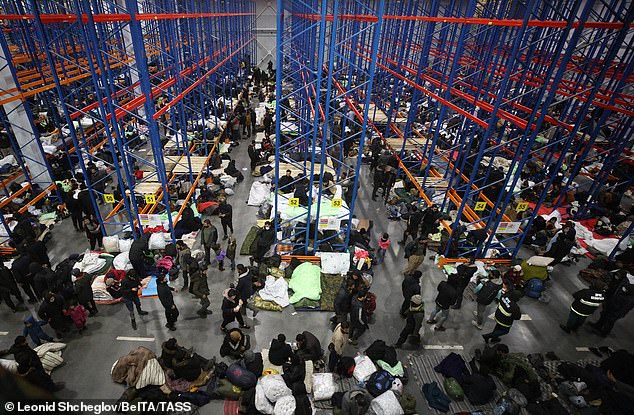 Belarusian state news agency Belta said 2,000 migrants who had been camped out in freezing conditions on the border spent the night in a nearby warehouse after clearing out of their camp 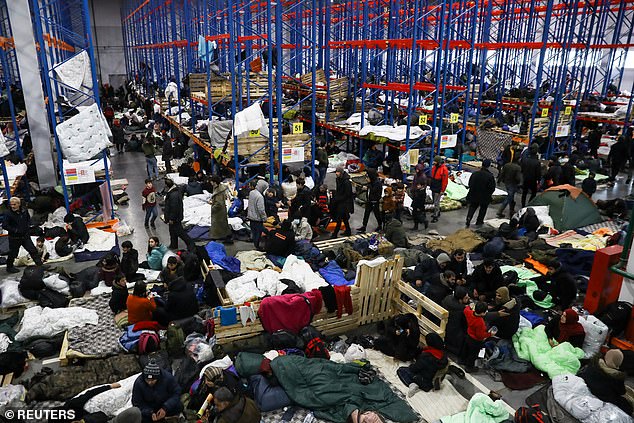 Belta published photos of the migrants, including young children, lying on mats in the facility and wrote that ‘for several it was their first warm night’

But despite this, Poland is still seeing repeated attempts by migrants to cross the Belarusian border.

‘There are still attempts by migrants to cross the border illegally,’ said Marek Pietrzak, spokesman of Poland’s Territorial Defence Force, which has soldiers on the border.

‘We can see how they are inspired and supervised by officers of the Belarusian border guard and other Belarusian uniformed services,’ he told TV Republika.

Since the beginning of the year, Poland’s border guard service says it has recorded over 34,000 attempted crossings from Belarus, including over 6,000 so far in November, nearly 17,300 in October, close to 7,700 in September and over 3,500 in August when the crisis began.

While there has been a decline in the number of attempted breaches over the last month, Michalska said the ‘latest attempts have become more aggressive.’

Ukraine on Friday warned migrants massed in neighbouring Belarus hoping to enter the EU not to cross onto its territory, saying they will be pushed back with any means necessary, including firearms.

The West accuses Belarus of artificially creating a migrant crisis by bringing in would-be migrants and taking them to the border with the promise of an easy crossing into the EU.

Belarus has denied this and urged the EU to take them in.

The Kremlin today said Putin and Lukashenko held another phone call about the migrant crisis on Belarus’ border with Poland and stressed the importance of cooperation between Minsk and the EU.

Minsk said Thursday that there were a total of around 7,000 migrants in the ex-Soviet country.

It said that it would take responsibility for sending around 5,000 of those migrants home and claimed that the EU would create a ‘humanitarian corridor’ to Germany for around 2,000.

But Germany swiftly shot down that claim, saying it was not true that it would take in 2,000 migrants.

Meanwhile hundreds of Iraqis who had failed to cross into the EU from Belarus returned home on Thursday on the first repatriation flight organised by Baghdad.

Ukraine warned migrants massed in neighbouring Belarus not to cross onto its territory, saying they will be pushed back with any means necessary, including firearms.

Ukraine, which borders both Belarus and Poland, fears that the migrants might seek to enter its territory in order to then reach EU countries that it borders.

‘In the event of threats to the life and health of border guards and law enforcement officers, we will use all the means of protection provided by law, including firearms,’ said Interior Minister Denys Monastyrsky.

Poland earlier this week fired tear gas and water cannon on stone-throwing migrants trying to cross into its territory.

Some countries, including Poland and Ukraine, have accused Lukashenko’s main financial and political backer Moscow of also being behind the crisis.

Monastyrsky claimed Friday that Russia could redirect the crisis to the Belarus-Ukraine border.

‘We do not exclude the possibility that Russia will decide to purposefully send a large number of illegal migrants through Belarus to our territory,’ he told parliament.

‘We are preparing for this situation systematically and thoroughly,’ he said, adding that the situation on the country’s shared border with Belarus is currently under control.

Ukraine last week said it would deploy thousands of border guards and security personnel to its border with Belarus in preparation for a potential crisis.

The EU and US this week announced fresh sanctions on the Belarusian regime, which has crushed political opposition and independent media since a disputed presidential election last year.

The EU and foreign ministers of the G7 global powers called on Lukashenko’s regime ‘to cease immediately its aggressive and exploitative campaign’.

US Secretary of State Antony Blinken told reporters on a visit to Nigeria that the US could add to sanctions already imposed on the country.

‘This effort to weaponise migration has to stop,’ he said. ‘First and foremost, it is doing a terrible injustice to these people that it has victimised by making them pawns.’

It also emerged Britain will send 100 troops to help Poland build a ‘Trump-style’ wall at the country’s border with Belarus.

The Royal Engineers are being deployed amid a crisis at the border to stop migrants from Iraq and Syria entering Europe.

UK Defence Secretary Ben Wallace said Belarus had been using migrants as ‘political pawns’ by attempting to assist their passage into Poland in a bid to destabilise the country. 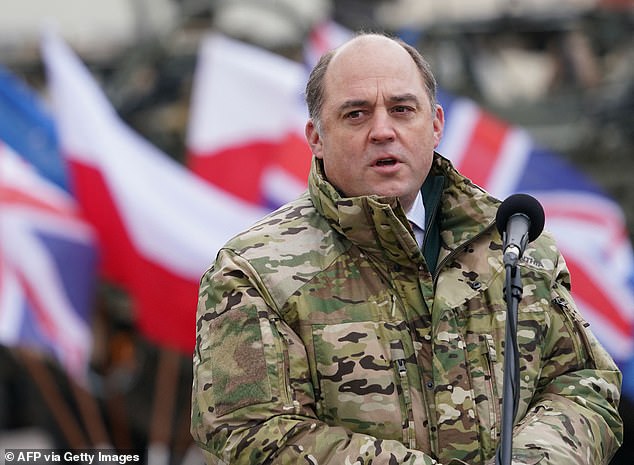 The Polish parliament signed off controversial plans in October to build an 18ft border wall which will cost £297million.

It will be equipped with motion sensors, a monitoring system and cover a roughly 125-mile stretch between the countries.

Mr Wallace also vowed the UK will ‘stand shoulder to shoulder’ with Poland and Ukraine amid rising tensions with Russia and Belarus.

‘We remain vigilant and stand ready to further help our allies,’ Stoltenberg told reporters on a visit to Berlin.

‘Belarusian President Alexander) Lukashenko’s regime’s use of vulnerable people as a means to put pressure on other countries is cynical and inhumane. NATO stands in full solidarity with all affected allies.’

Polish media say at least 11 migrants have died since the crisis began over the summer.

A medical charity on Thursday said it had come to the aid of a Syrian couple who reported their one-year-old child had died in the forest.