A COVID-19 conspiracy theorist has been fined $200 but avoided a conviction after she was dragged from her car by police for failing to present her licence during Victoria’s second lockdown.

In July last year, Eugenia Limberiou, also known as Eve Black, filmed herself celebrating after refusing to give a police officer her details and being waved through a coronavirus checkpoint in Bunyip, south-east of Melbourne. 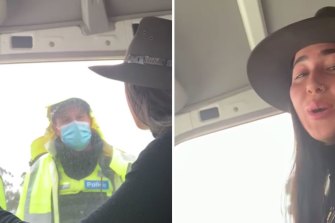 Screenshots of Eugenia Limberiou’s interaction with a police officer in Bunyip last year.Credit:Screenshot

Her actions drew widespread condemnation at the time from the state government, police and the public, but six days later she was pulled over in Carlton and again refused to give her details to officers.

A summary read to Melbourne Magistrates’ Court on Thursday said that on July 29 last year in Rathdowne Street, Ms Limberiou was argumentative and unco-operative and wound up her car window, locked the door and refused to acknowledge police requests to provide her details.

After warning Ms Limberiou they would have to break the window if she did not comply, police used a device to shatter the glass in the driver’s door and dragged her from the vehicle and arrested her.

The 29-year-old disputed an original allegation she gave a false name and address but after that charge was struck out, she pleaded guilty to refusing to provide her licence.

Judicial registrar Barry Johnstone said there was nothing in the summary that said Ms Limberiou gave a false name or address to police.

Mr Johnstone said the whole incident “could have been avoided” and fined Ms Limberiou $200, but did not record a conviction because she was a first-time offender. He acknowledged she probably had to pay to have her car window repaired.

Ms Limberiou, who has previously posted on social media her beliefs that the coronavirus is not real, was also previously fined $1652 by police for travelling during lockdown without a valid reason.