Downing Street insists ‘the PM pays his own bills’ as it is revealed Boris Johnson and Carrie Symonds have dined in style during lockdown on £12,500 of gourmet takeaways smuggled in from Britain’s poshest farm shop owned by Tory donor

Downing Street insisted that Boris Johnson pays for all his family’s food and drink today after it was revealed they have dined in style during the pandemic on gourmet meals worth thousands from a farm shop owned by a Tory donor.

The Prime Minister and fiancee Carrie Symonds have had around 30 giant boxes of shopping and up to 100 prepared meals, worth a combined £12,500, from a luxury organic food store ‘smuggled in’ to Downing Street via the rear entrance.

The deliveries are from the Daylesford organic farm shop company, owned by Lady Bamford, wife of JCB construction tycoon Lord Bamford, whose family has given millions to the Conservative Party.

According to the Commons Register of Interests, Lord Bamford and his JCB firm bankrolled Mr Johnson to the tune of £160,000 in 2019.

A heaving box of weekly shopping from Daylesford – one of the most expensive food stores in Britain, and which is favoured by celebrities including Hugh Grant – is delivered to Downing Street on Tuesdays with a bouquet of flowers.

In addition, pre-prepared meals are dropped off at lunchtime on weekdays by the same delivery man, prepared by Mr Johnson’s Daylesford ‘personal chef’.

But a Number 10 spokesman today told a Westminster briefing: ‘The cost of food for personal consumption is entirely met personally by the Prime Minister.’

He clarified that the personal consumption includes food eaten by the Prime Minister and his family. 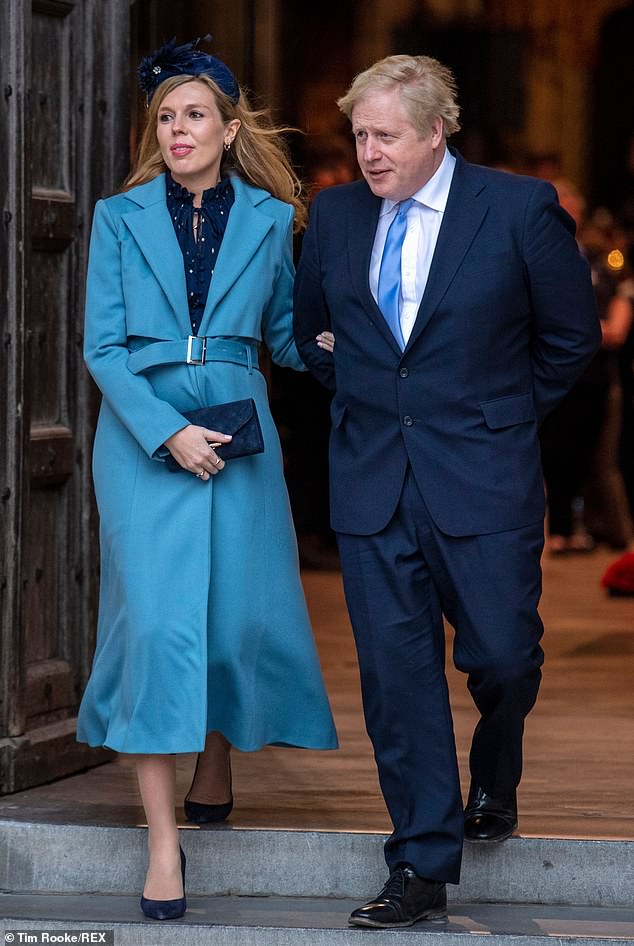 Boris Johnson and Carrie Symonds have dined in style during the pandemic – thanks to a secret £12,500 gourmet food supply provided by a business owned by the family of a billionaire Tory donor 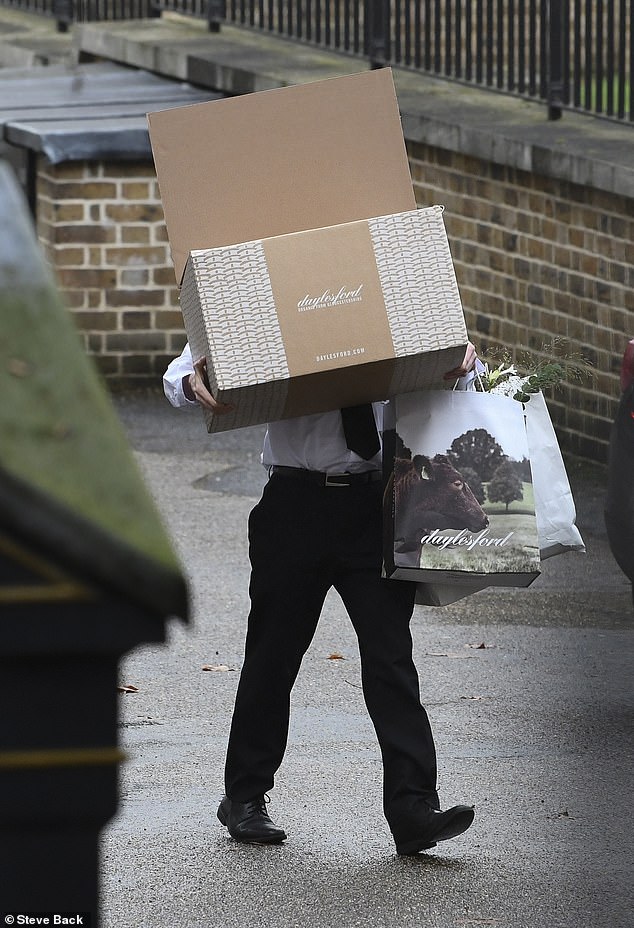 A heaving box of weekly shopping from Daylesford – one of the most expensive food stores in Britain, and which is favoured by celebrities including Hugh Grant – is delivered to Downing Street on Tuesdays with a bouquet of flowers 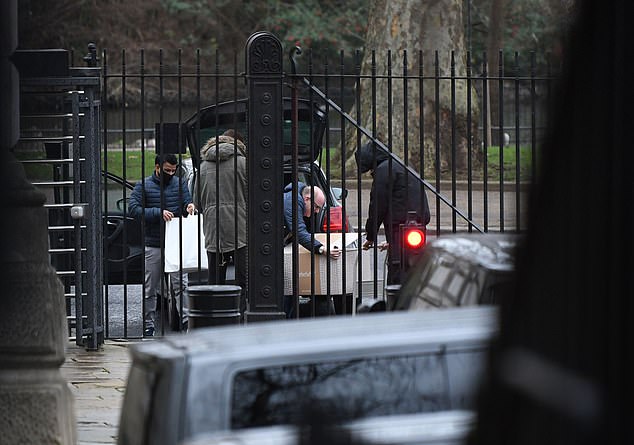 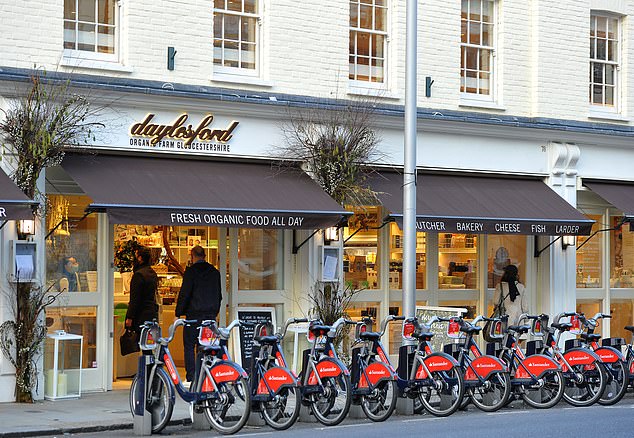 The hampers cost around £250 each, including delivery, worth a total of around £7,500 since the deliveries started nearly a year ago.

They are so heavy that Downing Street staff use a large trolley to ferry them to Mr Johnson and Miss Symonds’ Number 11 flat.

The revelation comes after the Mail told how Miss Symonds is masterminding a refurb of No11 ‘inspired’ by upmarket interior designer Lulu Lytle. 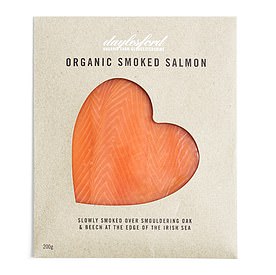 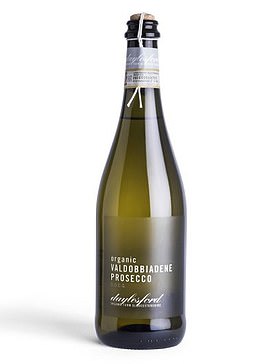 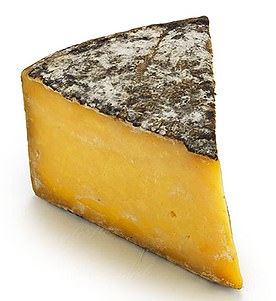 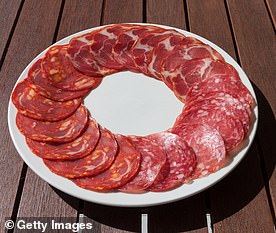 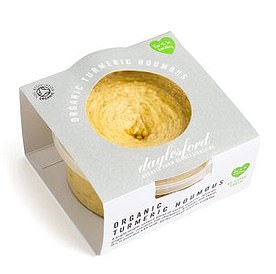 A member of the Daylesford staff said the ready-made meals are prepared at Daylesford’s Brompton Cross branch on Sloane Avenue in South Kensington by the firm’s head chef.

The staff member said the daily deliveries of meals started after the Prime Minister’s near-fatal brush with Covid last April.

Mr Johnson vowed to lose weight and improve his diet, with help from his health-conscious fiancee Miss Symonds.

Since then they are believed to have received organic food from Daylesford worth a total estimated at £12,500.

A cheaper option is available in the Downing Street canteen, frequented by junior officials, ministers and mandarins alike, where, thanks to a taxpayers’ subsidy, a healthy lunch of quiche lorraine and boiled potatoes costs a bargain £5.

The Daylesford deliveries mean that unlike millions of Britons, Mr Johnson and Miss Symonds have not had to queue at supermarkets during lockdowns.

But in their determination to keep their upmarket ‘food bank’ secret, they sparked security worries.

Insiders say there have been occasional ‘complaints from the Downing Street flat’ when the deliveries are delayed.

Lady Bamford has one cafe/shop in Gloucestershire and three in fashionable parts of London – Brompton Cross near Sloane Square, Marylebone and Notting Hill.

She and her husband live on a 1,500-acre estate near Chipping Norton in the Cotswolds, 30 miles from Mr Johnson’s private country home in Thame, Oxfordshire.

Lady Bamford founded Daylesford over 40 years ago, when she began converting her family’s farmland to produce organic food to improve her children’s diets.

It is now dubbed the most sustainable – and poshest – farmshop in Britain and has become a lauded example of eco-farming across the globe, a subject close to the heart of passionate environmental campaigner Miss Symonds.

The vast majority of Daylesford’s produce is reared and grown on organic land at the Bamford Gloucestershire estate, which also boasts a spa, cookery school and creamery.

Most of their livestock roam freely, and are fed on organic crops from the farm itself.

Their healthy lifestyles mean some animals are said to live twice as long at Daylesford compared to other farms.

Lady Bamford was awarded the OBE for ‘services to children and families’.

According to the Commons Register of Interests, Mr Johnson was given two hampers in April last year by Simon Blagden and Mohammad Chohan.

It does not say which company provided the hampers.

A Number 10 spokesman said: ‘The costs of food for personal consumption are met by Boris Johnson.’

The spokesman declined to comment further Daylesford and Lord Bamford failed to respond to a request for comment.