The plan was familiar and charted a much-travelled path: Ly Thi Thu Tran, ambitious and fresh from school, was to land in Melbourne and spend three years arming herself with English and a business degree for deployment and success back home in Ho Chi Minh City.

Just as familiar was how the returning home element of the plan was abandoned. 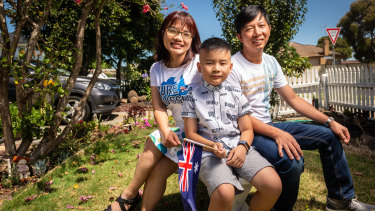 Like so many short-stay residents, Ms Tran, who arrived in 2007, was captured by the Melbourne weather, opportunities and sense of suburban safety. She admired Australia’s healthcare system (“it doesn’t matter if you have lots of money or not”) and saw herself and a future family receiving a good education and decent wages.

Instead of going home after her studies, she began thinking she might very much like to become an Australian herself one day.

“I just don’t have worry about lots of things. We have a settled life here,” Ms Tran said from her Sunshine North home.

She is dressed in her “Pure Aussie” T-shirt, the same outfit she will wear on Australia Day to realise her dream of citizenship.

“No. I’m excited because I’m finally official,” she said.

Husband Hung Phuoc Nguyen Hau and their eight-year-old son Andy, who can’t yet decide whether he wants to be a lawyer or an actor, will also be among more than 12,000 people from more than 130 nations reciting the pledge of commitment on Australia Day.

Social distancing means this is about half the number of new citizens who received certificates on Australia Day 2020.

Ms Tran said she first put in the family’s applications about a year ago but the ceremony was put back because of COVID-19.

Citizenship tests were stopped from late March last year and ceremonies were paused from April to early June. Virtual ceremonies, particularly in hard-hit Melbourne, have largely taken their place.

In a sign of how far Melbourne has come, Ms Tran and her family will be celebrating with 57 others when they take the pledge in Sunshine’s Kevin Wheelahan Gardens on Australia Day.

It will be Brimbank City Council’s first in-person citizenship ceremony since the beginning of the pandemic.

“They sent me an email to do a virtual ceremony,” Ms Tran said. “But I like to do it real. Getting the certificate is the big thing for me and I wanted to do it [with people].”

To achieve her citizenship, Ms Tran embarked on further studies in social work, an industry perpetually short-staffed, and happily discovered that helping people was in fact her true passion.

“Once I started I thought ‘wow, this is what I want to be’,” she said.

She now works in aged care coordinating activities for residents and was at the frontline of Melbourne’s winter war against COVID-19.

Despite the pandemic, Australia welcomed a record 205,000 new citizens in the 2019-2020 financial year, helping alleviate a backlog criticised by migrant advocates and the Labor opposition.

Almost 70,000 citizenships had been conferred in the current financial year as of December 31 and there were a further 160,000 applications “on hand”.

The Department of Home Affairs would not say if applications were again backing up on bureaucrats’ desks, but the number is significantly down on the 244,765 applications waiting to be processed as of July 2018.