Putin’s troops are using piles of their dead comrades as improvised walls to shield them from Ukrainian bullets on the frontline where there are ‘fields’ of rotting corpses, Ukrainian general reveals

Vladimir Putin’s troops are piling up the bodies of their dead comrades in a bid to shield themselves from Ukrainian bullets, it has been claimed.

The head of Ukraine’s military intelligence, Kyrylo Budanov, said he witnessed the shocking scenes during a visit to Bakhmut in Donetsk in late December, one of the fiercest battle zones along the 800-mile frontline in the war against Russia.

He also insisted Ukraine would not give up an inch of territory and said Russia’s failure to win the war after almost a year proved the country ‘is not a threat to the world anymore’, branding its military might a ‘tell tale.’

However he predicts the war will drag on for some months at least, with the fiercest fighting expected to take place in March as Ukraine plots a big push in the spring. 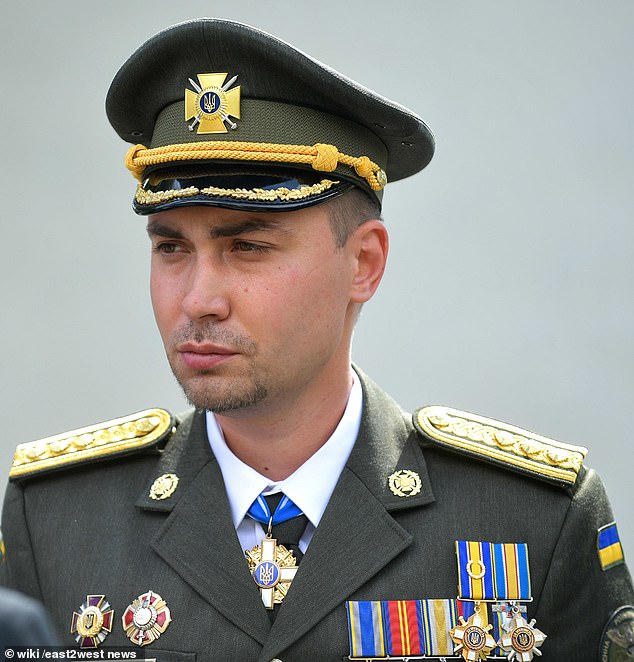 The head of Ukraine’s military intelligence, Kyrylo Budanov (pictured), said he witnessed shocking scenes during a visit to Bakhmut in Donetsk in late December, one of the fiercest battle zones along the 800-mile frontline in the war against Russia 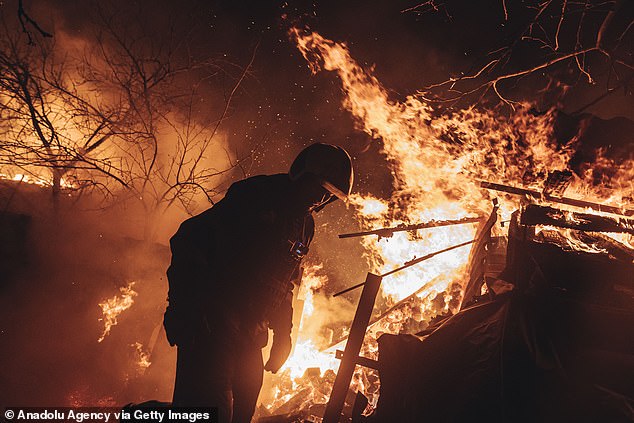 Emergency service workers extinguish a fire after shelling on the Bakhmut frontline in Ivanivske, Ukraine as Russia-Ukraine war continues

Speaking of his public appearance in Bakhmut, he told ABC News: ‘Soldiers showed me a section where dead bodies are piled up like something you would see in a movie.

‘There are hundreds of dead bodies just rotting away in the open field, in places they are piled on top of other bodies like makeshift walls, when Russian troops attack on that field they use those bodies for cover, like a shield.

‘But it’s not working. There are actual fields of dead bodies there.’

Budanov claimed Putin’s weapons stash is running low, meaning they had to seek out ‘cheaper’ and more ‘plentiful’ options.

Among these are the alleged Iranian self-destructing Shahed drones – although Iran has denied selling Russia hundreds of the deadly weapons.

It comes after Russia attempted to inflict mass casualties with 84 drones on January 1 and 2, all of which were neutralised by Ukraine’s air defences.

Budanov said he foresees the ‘hottest’ fighting in March and the spring, when he believes there will be more liberation of territories that will ‘deal the final defeats to the Russian Federation… from Crimea to the Donbas.’

He vowed to return the Ukrainian borders to those of 1991 and said the West must not fear ‘the transformation of Russia’, saying it would ‘only benefit the whole world.’

Budanov branded Putin’s regime a ‘laughingstock’ and said his troops have been reduced to defending the territories that they still hold in Ukraine.

‘Russia is not a military threat to the world anymore, just a tall tale,’ he added. 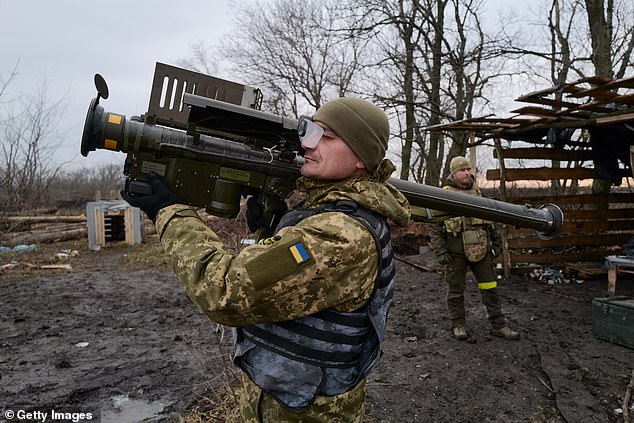 Ukrainian soldiers pictured on standby with a US made Stinger MANPAD (man-portable air-defense system) on the frontline on December 29, 2022 in Bakhmut, Ukraine 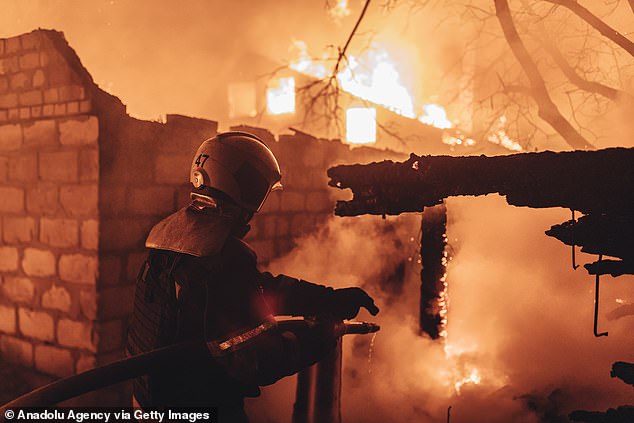 Budanov claimed Putin’s weapons stash is running low, meaning they had to seek out ‘cheaper’ and more ‘plentiful’ solutions (Pictured: Emergency service workers extinguish a fire after shelling on the Bakhmut frontline in Ivanivske, Ukraine on January 2)

He admitted that Russia’s mammoth nuclear weapons arsenal was a concern, calling for the country’s denuclearisation or ‘at least an international overseeing’ of its nukes.

It comes after Russia yesterday blamed its soldiers illegally using their mobile phones for giving away their location before a deadly Ukrainian strike killed ‘hundreds’ of their troops at a military college.

The Kremlin raised the death toll from the New Year’s Day strike in Makiivka from 63 to 89, the highest acknowledged loss in the war, although Ukraine says the true number is around 400 dead.

At the time of the attack, Vladimir Putin had just delivered his traditional New Year’s address, hailing ‘our heroes’ fighting in Ukraine. 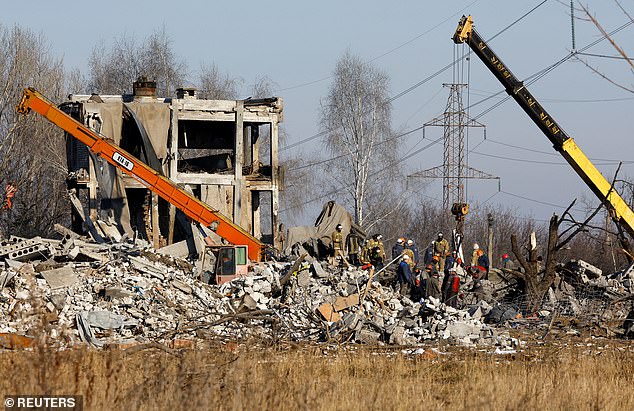 Although an official probe has been launched, the main reason for the attack was clearly the illegal mass use of mobile phones by servicemen, the ministry said.

‘This factor allowed the enemy to track and determine the coordinates of the soldiers’ location for a missile strike,’ it said in a statement issued just after 1 a.m. (2200 GMT Tuesday) on Wednesday.

However, Semyon Pegov, a prominent Russian war correspondent awarded the Order of Courage by Putin in late 2022, questioned the ministry’s reasoning.

In a Telegram post, Pegov said that Ukraine could have been able to locate the troops via drones and intelligence, not necessarily through mobile phones.

‘The story of mobiles is not very convincing,’ Pegov said. ‘I rarely say this – but this is the case when it would probably be better to remain silent, at least until the end of the investigation. As such it looks like an outright attempt to smear the blame.’ 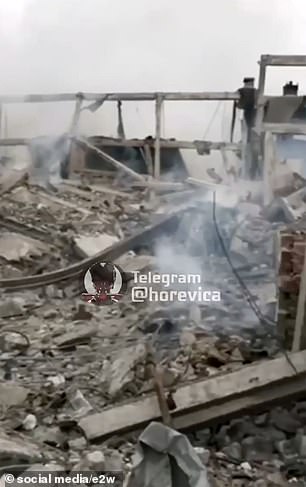 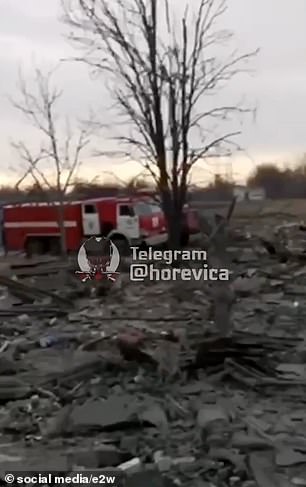 Rubble is strewn across the ground in Russian-occupied Makiivka, in the eastern Donbas region, in the aftermath of the strike. The missiles hit a vocational school which had been turned into a barracks for Russian forces 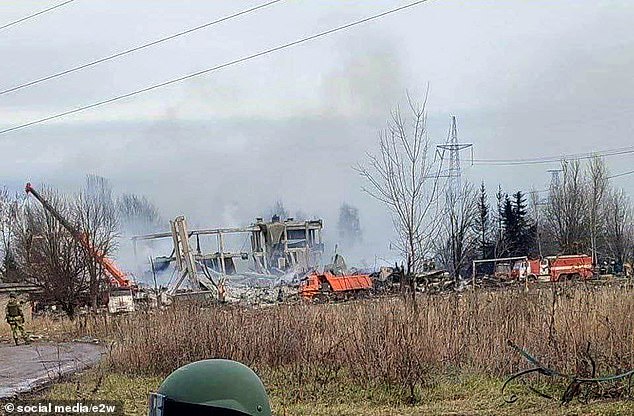 Pictured: The aftermath of the HIMARS missile strike is seen in Russian-occupied Makiivka on December 31. Russia has admitted 63 soldiers were killed in the strike, although Ukraine’s military has said this number if far higher

Pegov also said that the number of casualties would rise.

‘Unfortunately, their number will continue to grow. The announced data is most likely for those who were immediately identified. The list of the missing, unfortunately, is noticeably longer. I cannot disclose the sources, but I consider them reliable.’

The ministry’s reaction came amid mounting anger among some Russian commentators, who are increasingly vocal about what they see as a half-hearted campaign in Ukraine.

Most of the anger on social media was directed at military commanders rather than Putin, who has not commented publicly on the attack which was another blow after major battlefield retreats in recent months.

Volodymyr Zelensky, who rarely comments on specific Ukrainian military strikes, made no mention of the attack in a video address on Tuesday. 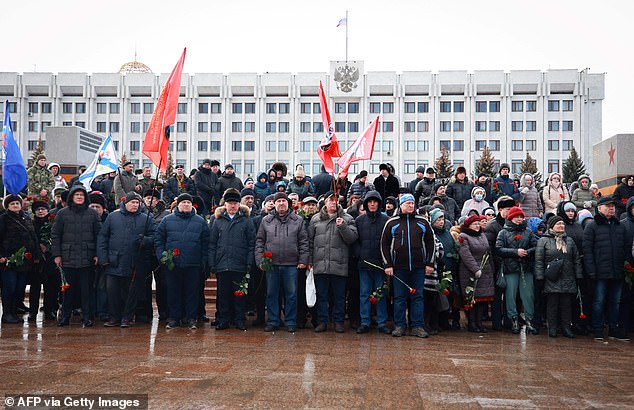 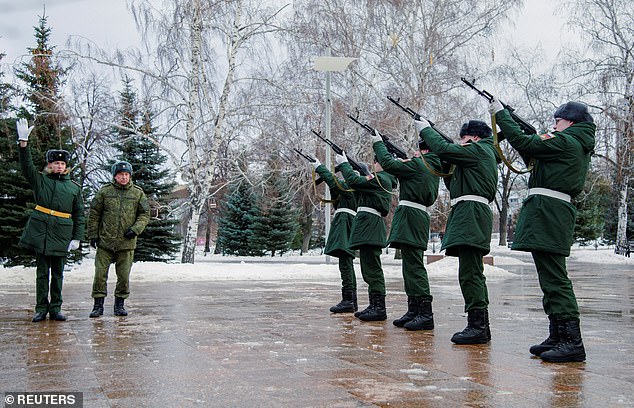 Pictured: Honour guards fire a farewell salute during a ceremony in memory of Russian soldiers 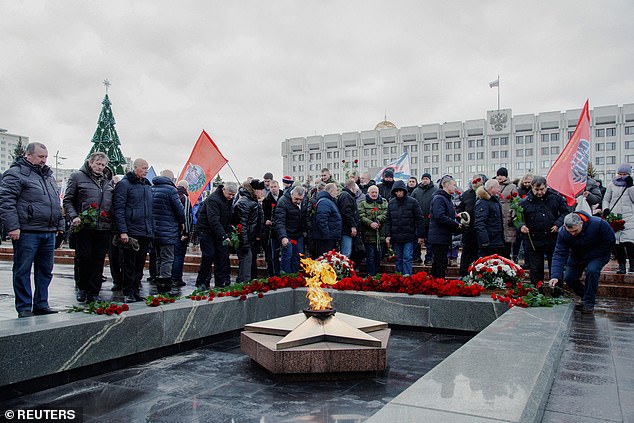 SAMARA, RUSSIA: Russian mourners voiced grief and anger at Moscow’s commanders on Tuesday during a rare public commemoration for the scores of soldiers that were killed

Ukraine’s military has said it launched a strike that resulted in Russian loss of equipment and possibly personnel near Makiivka. But it has given no further details.

Russian nationalist bloggers and some pro-Russian officials in the region put the Makiivka death toll in the hundreds, though some say that those estimates are exaggerated.

The new announcement came after mourners gathered in several cities of the Volga region of Samara — where some of the servicemen came from — to mourn the dead.

Some 200 people laid roses and wreaths in a central square in the city of Samara as an Orthodox priest recited a prayer.

Soldiers also fired a gun salute at the commemoration, where some of the mourners could be seen holding flags for the ruling United Russia party.

‘It’s very tough, it’s scary. But we cannot be broken. Grief unites,’ Ekaterina Kolotovkina, head of a group of army spouses, said at the ceremony. 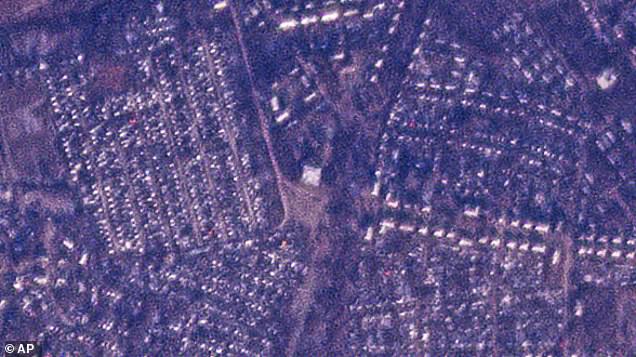 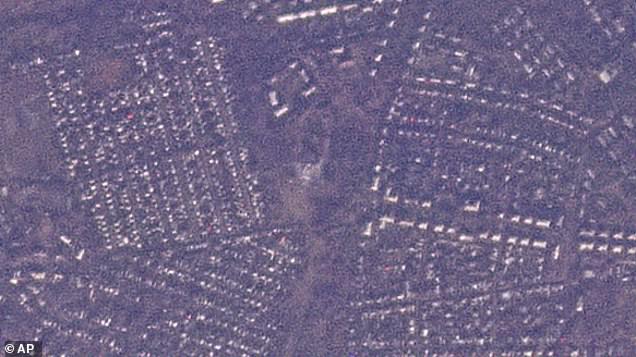 MAKIIVKA, DONESK OBLAST: This satellite photo from Planet Labs PBC shows the before and after scene at Makiivka on December 20 (left) and January 2 (right)

Similar gatherings were reported in other cities including Tolyatti, home to Russia’s largest carmaker AvtoVAZ

It comes as Zelensky said Russia was set to launch a major offensive.

‘We have no doubt that current masters of Russia will throw everything they have left and everyone they can round up to try to turn the tide of the war and at least delay their defeat,’ Zelensky said in a video address.

‘We have to disrupt this Russian scenario. We are preparing for this. The terrorists must lose. Any attempt at their new offensive must fail,’ he continued.

A little known patriotic group which supports the widows of Russian soldiers is calling on Putin to order a large-scale mobilisation of millions of men and to close the borders to ensure victory in Ukraine.

Zelensky reiterated Ukrainian assertions that Moscow is planning a full-scale mobilisation, a step that Russian officials say is not currently being considered.

Putin plans to talk to Turkish President Tayyip Erdogan on Wednesday, Kremlin spokesman Dmitry Peskov told Interfax, the latest in a series of conversations the two leaders have had since the start of the war.

Turkey acted as mediator alongside the United Nations last year to establish a deal allowing grain exports from Ukrainian ports but the chances of serious peace talks look remote, especially as fighting continues to rage.

Ukraine’s General Zaluzhny, summarising a Tuesday call with U.S. Chairman of the Joint Chiefs of Staff General Mark Milley, thanked the American for helping ensure the provision of anti-missile weapons systems that Kyiv says is knocking out more and more of the Russian missiles aimed at power-generating plants.

Zaluzhny said he had discussed what equipment Ukraine needed to increase its chances against Russia, a message that senior officials have hammered on a daily basis.

British Prime Minister Rishi Sunak told Zelensky that he can count on Britain for support over the long run ‘as demonstrated by the recent delivery of more than 1,000 anti-air missiles’, Sunak’s office said on Tuesday.

The General Staff of Ukraine´s Armed Forces on Wednesday said Russia had launched seven missile strikes, 18 air strikes and more than 85 attacks from multiple-launch rocket systems in the past 24 hours on civilian infrastructure in three cities, Kramatorsk, Zaporizhzhia and Kherson.

‘There are casualties among the civilian population,’ it said. Russia denies targeting civilians.

The battlefield report could not be independently verified by Reuters.